The Democratic Party of Iranian Kurdistan (PDKI) is a Kurdish left-wing militant organization (sometimes also called political party) based in Iranian Kurdistan. De-facto, it supports the ideas of the Kurdish nationalism and separatism.

In June 2016, the PDKI launched an armed struggle against the Iiraniani authorities. The main clashes between Kurdish militants and the Iranian security forces were observed on June 15-28. 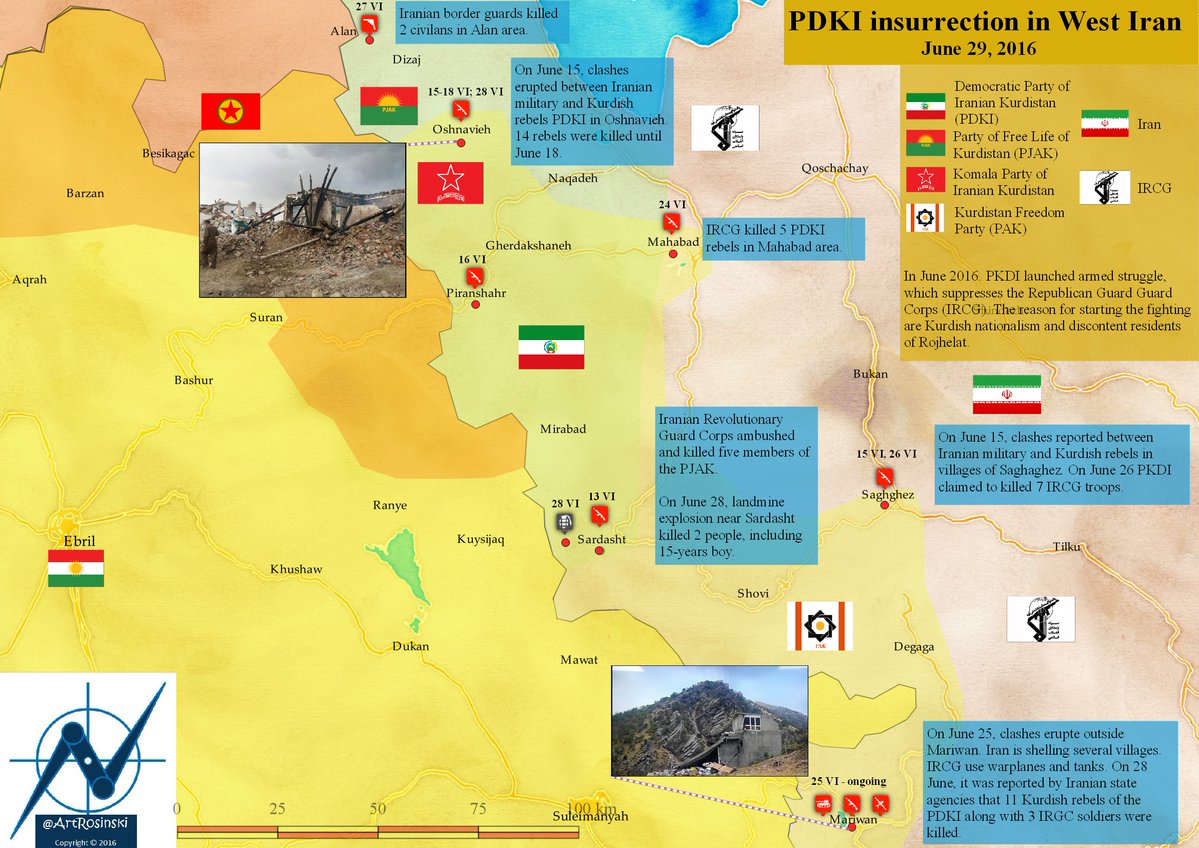 Here is an excellent map of the all the main Kurdish factions, with descriptions:

Thanks, Akira. There are probably some points about the map that some would dispute – I’ll call out a couple as points of controversy, not as a critique of the otherwise great map.

I don’t think the Yezidis like to be called Kurds. They are by language and ethnicity, but they have a very strong socio-religious identity that they see as being distinct from other Kurds, The PDK seems to prefer to think of them as Kurds on Kurdish land – PDK Kurdish land, to be specific. The Yezidis didn’t get to vote on it – Barzani just announced that they were part of his empire after the Sinjar massacre.

The Iraqi Kurdistan Region has strong political regions for claiming the land within their self-defined borders as having significant Kurdish settlement (brown shaded areas) but there’s a lot of variation. Many areas are historically mixed and/or sparsely populated, other areas are not majority Kurdish (just ‘significantly’ Kurdish) and other areas have significant populations of Kurdish refugees who may or may not consider themselves permanent inhabitants.

The Iraqi Kurdistan region is graphically split into two areas of competing political parties: the PDK and the PUK. While generally true, it’s a lot more nuanced than that with other political parties not even shown. This is kind of an historical artifact of the two most powerful tribal groups and alliances morphing into the PDK and PUK. The boundaries shown are a mix of areas with strong allegiances to the parties and territory the parties just claimed as ‘theirs’.

Rojava probably should be identified with the PYD political party for the reasons stated above. They are the most powerful and simply claimed all the land within their self-defined borders as Rojava. The Rojava show on the map is only the currently militarily controlled areas, not the self-defined federated Rojava (which is contiguous and includes more land). The Kurds are not necessarily loyal to (or even like) the PYD. Many areas of Rojava are ethnically Arab or Turkomen but claimed as Rojava by the PYD, sometimes with and sometimes without the current inhabitant’s consent.

The YPG and YPJ are equivalent and co-located everywhere, so I’m not sure why the women’s YPJ is in smaller letters next to the YPG. They wouldn’t like that.

The SDF is suppose to be a non-aligned anti-ISIS coalition, not a Kurdish or Rojava military faction/unit as shown on the map. There’s a question of whether they will exist or not after ISIS is defeated, and if the YPG/YPJ will be the only recognized Rojava military unit after federation or independence. There are also non-Kurdish militias in the SDF that have no particularly loyalty to Rojava or the Kurds – they may well be independent after ISIS is defeated.