The Kurdish YPG (also described as the SDF in the media) has attacked pro-Turkish militants, supported by the Turkish Armed Forces, in the area northeast of al-Bab in the Syrian province of Aleppo, according to local sources.

Clashes between Turkish forces and the YPG were reported in Qabbaseen.

Some YPG sources announced that the group is also going to advance on al-Bab. 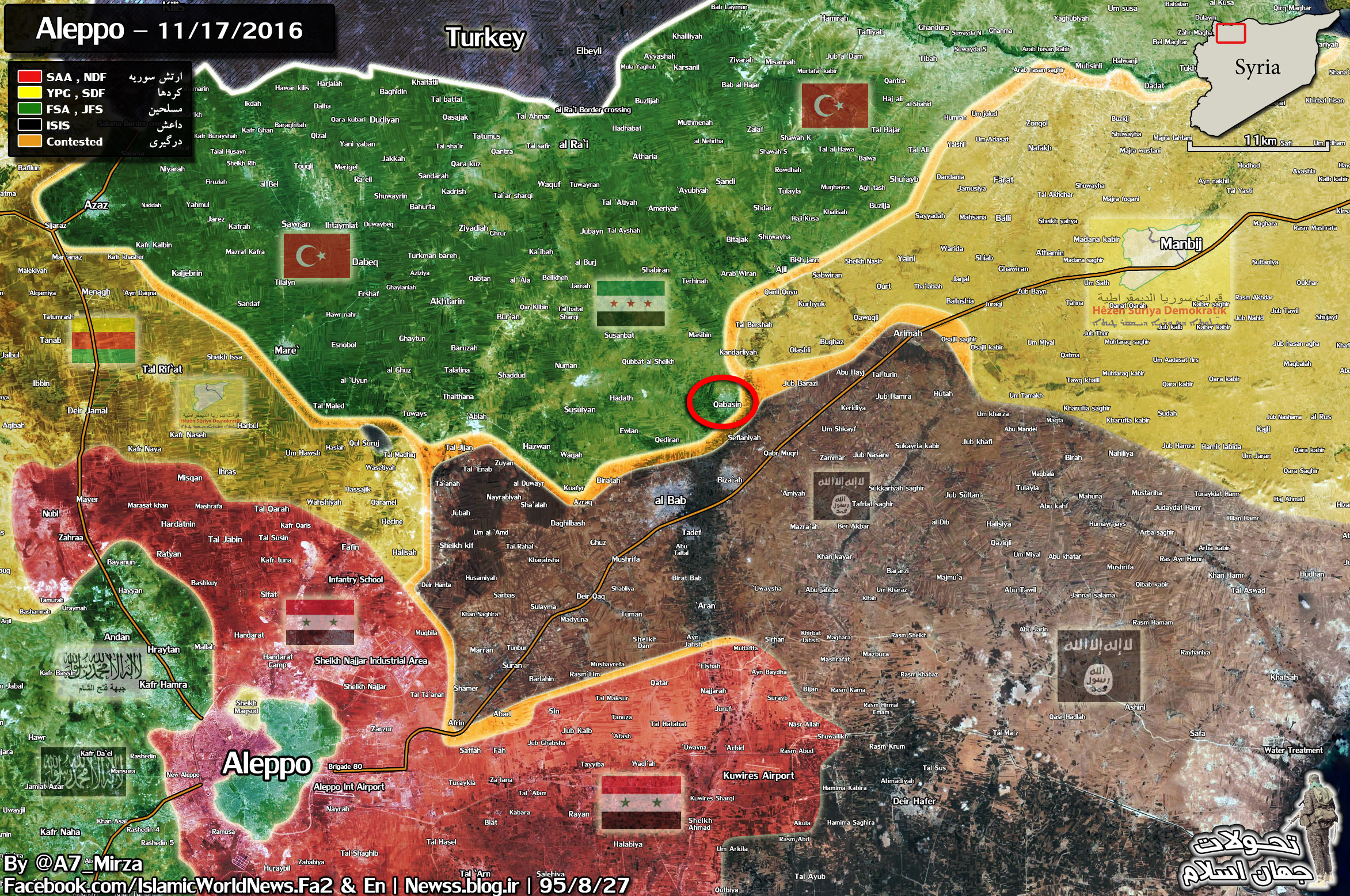 So it begins. The SDF advance came right after Turkey’s Defence minister warned them not to approach Al-Bab. I guess we’re about to see how committed Turkey is to this fight, given that FSA have a struggle with wet paper sacks on their own.

They too busy killing each other in Azaz.

Kurd commies and Turkroaches killing each other for Harambe. Nothing of value was lost.

Given the wall-to-wall Islamists around there, I think the region could use some more Anarcho-Syndicalists who can fight, as long as we can get them without Barzani-type crime syndicates or a local CIA/MI6/Mossad/DGSE office.

I rather have Kurd commie then Turkroaches which will NEVER leave the area they get.

Peshmerga said they weren’t leaving either, or so I read around here. Ideally the Syrian state would be whole again and all these rats, fumigated.

So they did, but SDF aren’t the same as Peshmerga. SDF actually contain some local non-Kurdish Syrians, albeit they seem to be outnumbered about 4-to-1 by YPG. For example, taking part in this peration, under the al-Bab Military Council, we find Jaysh al-Thuwar (Army of Revolutionaries), who are Arab. Also, theoretically (according to all official statements), SDF, Kurdish and non-Kurdish elements alike, are looking for a federal system inside a united Syria, not an independent country. The SDF seems to contain the very last handfuls of democratic Syrian rebels in existence, and while those groups, like Jaysh al-Thuwar oppose Assad, they have all said that, following democratic principle, they will accept him as president if the majority of Syrians want him, as long as they can get the reforms SDF is proposing.

SDF is the same. Their dream Royava = 40% kurds, 60% not Kurds. They are like nazist, with idea of big, big lebensraum. Hitler is happy.

I wouldn’t say that’s true. The Anarcho-Libertarian ideals that underpin Kurdish society and North Syria Region – Rojava don’t involve Kurds ruling over everyone else at all.

First, contrary to popular belief, most Kurds aren’t looking for “their own” state any more. The idea “Democratic Confedralism’ which Abdullah Ocalan developed is defined as “a non-state political administration or a democracy without a state.” Rojava is called ‘North Syria Region – Rojava: because it is supposed to be region inside the Syrian nation, not an independent entity. “Kurdistan” is no longer really seen as a nation-state concept by most Kurds these days.

The whole premise behind it’s set up is pluralistic, and like any Anarcho-Syndicalist system, involved each area having it’s own self-elected governing council, which handles the majority of governing deceisions locally, and only looks to higher authority on matters that broadly affect multiple areas. Those assembles in turn elect representatives to the higher councils that govern larger regions. There are four such levels within NSR-Rojava. So a predominately non-Kurdish area is going to be run by local non-Kurds, and each high assembly’s representatives are elected by people from all the areas it governs. The whole system is actually designed to prevent any minority group from ruling over others. It’s the exact opposite of what you imply.

On the whole, I’d say the Kurds have a more genuinely democratic set-up than most of Europe or the USA.

It’s also a vast improvement on what was there before, because whereas the Syrian Constitution was actually based on Islamic Law, and therefore tacitly accepted numerous backwards practices liked arranged underage marriage and general sexism, while the Rojava Charter is founded upon universal human rights regardless of gender, creed or ethnicity. They want to fix everything that was wrong with Baathist Syria, but without splitting up Syria.

Boring to read all that dirty and often constructed stuf, where all other Turks, Syrians, Iranians and Iraqians are the nicest and most friendly and reliable people, You can find in the whole world.

The most commen thing for them are, that every fault in the world always are done by others to them, but they had the real heroes and therefore are the winners.

You might read about the political and military systems in the areas possesed.

Many are not like that. You can read about Hasakh yesterday, where the opposition to YPG was arrested and their radiotransmitter where illegal confiskated.

Seems You dont know much about, so I stop writing here…