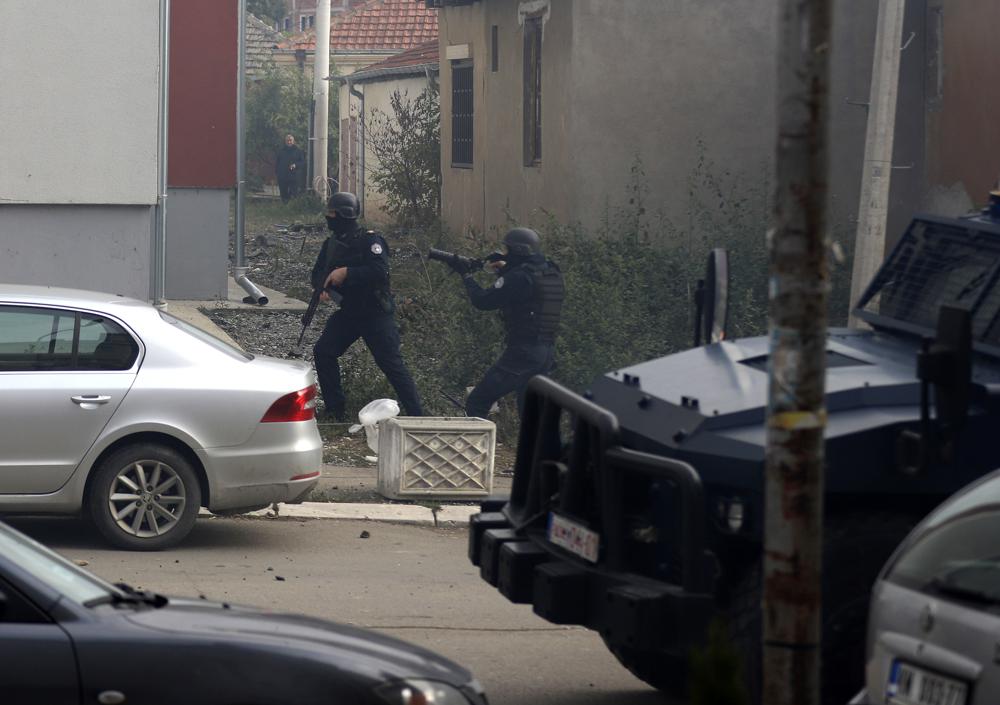 On October 13th, one Serb was shot and six police officers injured when police fired tear gas to disperse a crowd that became hostile after raids on suspected smugglers in a volatile area of Kosovo populated by the Serb minority.

Kosovo police said officers met resistance in Mitrovica as they carried out an operation to seize smuggled goods in several towns.

A Kosovo police statement said the raids were held in four areas, including northern Mitrovica which is mostly populated by ethnic Serbs. It said that “criminal groups gathered in an organized way to block roads with vehicles, used liquid gas tanks, stun bombs, shot with weapons and hand grenades to hamper and attack custom and police officials committing their duty.”

“Crime and criminal groups will not be tolerated and will be fought. We will fight and stop the smuggling.”

Serbian state TV showed people running from tear gas and one vehicle set on fire. Firefighters’ vehicles were parked nearby. It said several people were injured.

The Kosovo Online news portal quoted Zlatan Elek, the head of a hospital in Mitrovica, as saying one person was seriously injured.

“The injury to the shoulder blade and ribs has been caused by a firearm … He is in intensive care and is in serious condition,” Elek was quoted as saying.

Serbian President Aleksandar Vucic left Belgrade to go to the central Serbian town of Raska to meet representatives of Kosovo Serbs later in the afternoon, his office said.

Serbian Prime Minister Ana Brnabic urged NATO, which has 3,000 peacekeepers in Kosovo, to step in and stop the violence.

Brnabic demanded “quick reaction” from the “international community,” including NATO and KFOR because she said the situation in Mitrovica is “more than dramatic.”

“This is the last moment that demands clear reaction to stop the mad policies conducted by Pristina,” Brnabic said in a statement. “This kind of conduct … brings us to the edge of chaos.”

The violence prompted an angry response from Serbia for the international community, including NATO-led peacekeeping mission KFOR, to restore order and prevent “wider chaos.”

The region is already on edge after a border dispute last month between Kosovo and Serbia over vehicle license plates threatened to spiral into violence. But Western officials intervened and KFOR forces were deployed to the area, ending the spat.

Petar Petkovic, a Serbian government official in charge of Kosovo talks, said a 36-year-old Serb was shot in the back and a bullet ended up in his lungs which doctors are trying to remove.

Petkovic said Serbian President Aleksandar Vucic is on his way to the Serbian town of Raska that is near Kosovo, where he will hold a meeting with Kosovo Serb representatives.

“I am asking KFOR and the international community to react and stop this madness by Albin Kurti,” said Petkovic. “If KFOR can’t react and protect the Serb people, there are those who can.”

EU foreign policy chief Josep Borrell said Brussels was “in contact with Belgrade and Pristina,” adding that “All open issues must be addressed through the EU-facilitated Dialogue.”

“The violent incidents in the north of Kosovo need to stop immediately. Unilateral and uncoordinated actions that endanger stability are unacceptable,” he tweeted.

Why are the Serbs asking for protection from those who put them in that situation?

Indeed thats the problem,they will have to protect themselves.

Because we are surrounded by NATO countries. Since the 1999 NATO aggression, they have been the only armed force in Kosovo in charge of Serb security. According to their custom, they violated all agreements and armed the siptarians who are now attacking the Serbs. Now there is no going back, we will not wait to be killed. If they want a war there will be a war.

We Greeks have supported you.

Greece is in NATO – NATO bombed Serbia for 72 days straight. Mostly from air bases in Italy but coordinated with and using Greek airspace. With depleted uranium ordnance no less, that poisons the water table. Greece is a NATO controlled minnow – that didn’t help the traditionally Orthodox states of rump-Yugoslavia in 1999, or more recently Armenia, from NATO member based aggressive wars.

Albanians are Greeks, Serbs are Orthodox. Edi Rama should be removed.

Vucic is a western puppet…he will not send the Serbian army there….even if Kosovo terrorist police kill half of Mitrovica population…

In the meantime, the Serbian military has been beefing up its combat capability and technical developments at a rapid rapid pace. They must know what’s going to happen next.

Sefbs should have rolled tanks over that so called border a long time ago and created some new facts on the ground instead of crying to Nato.

The problem is Serbia is a land-locked nation and could easily be cut off from Russian, Belarusian and Chinese aid if all the NATO countries surrounding it closed their airspace to military resupplies. From my geographical-political understanding, there would be a way to circumvent this, however, and it would involve a union between Serbia proper and the Republika Srpska in Bosnia Hervegovina. Then the distance to the Adriatic would be just a stone’s throw impeded by a small strip of land, a few kilometres wide that is part of Croatia’s territory on the border with Montenegro, which begs me to ask the question: why has Croatia been created given it nearly the entire Adriatic coast of the once Yugoslav Republic with the exception of the mafia trafficking state of Montenegro? Was somebody hoping to cut Serbia off one day from any form of maritime tansport. The borders definitely need to be redefined giving Serbia access to the sea.

kosovo is obviously a fake a$$ constructed “nation”. Massive population relocation in an attempt to make kosovo, a instead of Serbian.

Fake nation with fake Us military facility. A massive scam in the central Balkans. Get rid of the american pigs that US idiot Kitarovic loves so much. Traitors to all Slavic people.

No word on what these smuggled goods were.

You should all watch the great 2019 Russian/Serbian action film, “The Balkan Line”. The UCK is exposed for the murdering scumbag terrorists they are.

WTF is “kosovo” to begin with? An artificial state with mass migration into it, funded by western amero/anglo pigcrap. In other words a fake construct of a nation.

May all the imposters to the region be exposed as pig degenerates.

It ‘aint smuggling when the Serb population in the north wants to remain in the country they were born in – Serbia – and don’t recognize the Kosovo border or the hostile governing Albanian mafioso in the south imposed by NATO. That is resistance to foreign occupation.