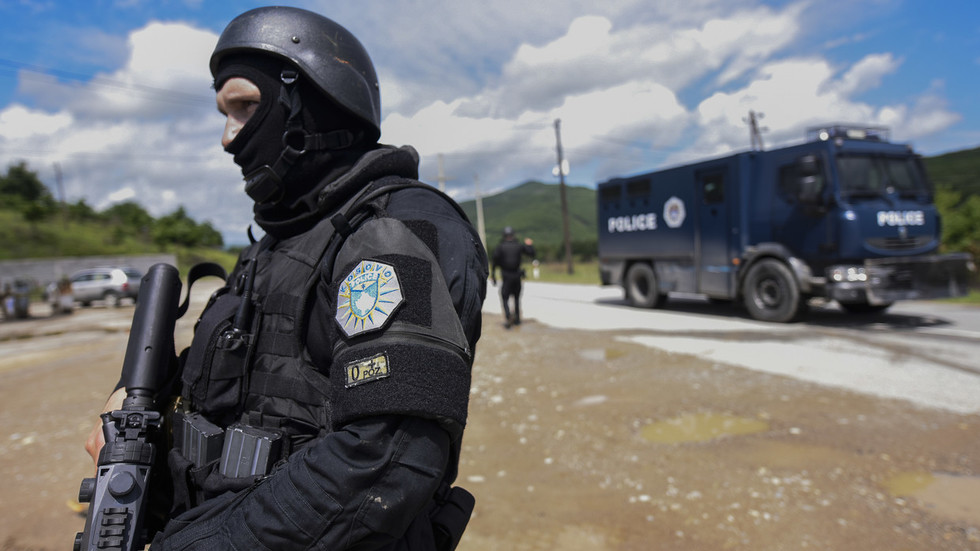 A member of the Kosovo Police Special Unit near the village of Cabra during the May 28, 2019 raids in the predominantly Serb north of Kosovo. IMAGE: AFP / Armend Nimani

The May 28 raids by Kosovo forces in the Serb-dominated area of the breakaway region is a provocation, the Russian Foreign Ministry stressed.

The Russian side emphasized that actions of Kosovo’s special forces (ROSU) were indulged by the EU and US.

Spokesperson Maria Zakharova said that Pristina’s man aim is “to intimidate and force out the non-Albanian population and forcibly establish control of the area.”

She also explained Pristina’s aggressive behaviour with the “perennial indulgence” on behalf of the EU and the US.

The ROSU launched a raid in the town of Zubin Potok in the Serb-dominated north-western part of the Autonomous Province of Kosovo and Metohija (Serbia’s official name of Kosovo).

Some media outlets reported gunfire during the raids, which Pristina described as an operation against an organized crime. Over a dozen ethnic Serbs are said to have been arrested.

The raid violates the agreements between Belgrade and Pristina which prohibit the ROSU armed with long-barreled weapons from penetrating deep into the Serbian municipalities.

Kosovo army enter there because they know that Serbia are rule by pro western politics…therefore they will never send Serbian army there to protect serbs!

Nobody would help Serbia if they would send the army, NATO would smash them again, they should had an army dressed in civil clothes.

Thats a f$$^ing great idea, after that nato can shoot all civilians no problemo. I would avoid giving nato any justification

You’re one of those that think if we didn’t had the police, armed criminals would kill us all, don’t you?

Not at all, but nato=armed criminals is not far from the truth sir.

If your arm civilians, NATO will do what it did to Fallujah years ago, NATO would do it without thinking twice.

The consequences(extermination) are grave enough that one must think about it, to do otherwise, is not the wisest of moves.

Thats all, my step used to say, think.further than your goddamned nose boy!

If you ask anyone in the Eastern Europe, if they had to be invaded next day and the only thing they could chose was who they would prefer, no other country but Serbia would chose Russia over NATO. And Serbia was never invaded by Ivan the Rapist. nato=armed criminals you say? yes any army=criminals but there are savage criminals that cut your throat for a bottle of vodka and styled criminals who demand ‘protection fee’

Russia was too weak to help them in 90s. Now the situation is the other way around. Nobody will try to stop Russia when Russia will help Serbia this time. None of EU coutry has an army that could even come close to defeating russian army. And US will not go to WW3 because of Kosovo. US is only trying to get Europe to fight against Russia. But Europe does not have the balls or power to do so.

it looks like you dont like reality. Which country among Serbias neghbours do you think is going to prevent Russian military help from reaching Serbia? Did you not noticed that Russia has been giving Serbia military equipement including aircrafts, tanks and armoured vehicles for free or for symbolic price recently?

Ok, let’s play this scenario. How would Russian military reach Serbia? Name a few cities they could pass through.

Croatia, Bosnia, Montenegro, Albania would not be able to prevent Russian military to go throught their teritory. This is true to te extent that they would not even try, because they know their tiny forces would be wiped out. I know they are part of NATO (except Bosnia) but NATO is commanded by the US. US will no go into WW3 because of some muslim albanians trying to take Slavic land. NATO would fall apart if US tries to push it into attacking Russian army without US forces forcing other armies to do so. There is some countries that would even switch sides, as was proven many by history. Czech, Slovaks, Bulgarians and even non slavic Romanians have all switched side in the past in a big western war against Russia.

Serbian minority should had armed popular militia til now, they should have organized it like 20 years ago.

As the anglozionist-launched information and economic war dies down, and the kinetic/military aspects of WW3 begin, I think Kosovo will be one of the first US-NATO protectorates to finally get it’s karma.

You could be right on the mark there Colin.

Why are Albanian militias even allowed by Serbs in Kosovo to invade “that far”. As somebody else has said ,the Serbs have had twenty years to enforce the law against “criminals” in their areas by its own militia!

It seems incompeten to me that the Serbs have not formed a militia yet of their own!

Albanians know how to deal with war criminals from Serbia. They’ve been oppressing people of Kosovo for decades, since mid 1970’s. When people train for police many gone to Belgrade to finish 3 month training in Kosovo, training on Albanian woman and children. My uncle went there and regrets it till this day, so did many people. Serbia should learn to live with consequences of their misconduct.

History between Albanians and Serbs didn`t start in 70`s. There is no right side in therms of good an evil, just a periods of revenge when one side used a historical geopolitical advantage. What is the real strength of Albanians without NATO? And what will happen after this alliance collapse eventually? Lets talk about future without big players. Balkan to Balkan people is the only solution for long peace. It is always difficult to get that when the wheel of fortune is on your side, but wheel is the wheel, always spinning.