I extend my greetings to the Korea International Peace Forum (KIPF).

My thoughts are with the people of Korea in their quest for peace, unification and national sovereignty.

The pathbreaking April 27 Panmunjeom Declaration for Peace, Prosperity and Unification of the Korean Peninsula signed by Chairman Kim Jong-un and President Moon Jae-in constitutes an expression of solidarity and commitment. It reaffirms that there is only one Korean Nation. It lays the groundwork for cooperation, reunification and demilitarization of the Korean peninsula.

While the inter-Korean dialogue initiated prior to the winter Olympic games has set the stage for an era of cooperation and reconciliation between North and South, it does in in itself ensure the U.S. demilitarization of the Korean peninsula.

U.S. Foreign Policy is based on the Art of Deception.

It would be a grave mistake for North Korea to unilaterally give up its powers of nuclear deterrence without a corresponding commitment on the part of the United States.

The Kim-Pompeo secret Easter March negotiations in Pyongyang involving intelligence and national security officials from the US, ROK and DPRK have set the stage for the formulation of a US agenda, requiring unilateral concessions on the part of the DPRK.  And it is this agenda which will be upheld by Washington in the forthcoming Kim-Trump summit in Singapore on June 12.

In the words of Trump in relation to the Singapore Summit: “We will both try [Kim and myself] to make it a very special moment for World Peace!”

How?  Will the US abandon its military ambitions? Highly unlikely. Barely a couple of months back Trump was threatening North Korea with a so-called “bloody nose” attack.

In recent developments, the DPRK cancelled its May 16 high-level inter-Korean talks with the ROK in response to the US-South Korea military exercises, which violate the spirit of the Panmunjom Declaration. According to the North Korean KCNA media report:

This exercise targeting us, which is being carried out across South Korea and targeting us, is a flagrant challenge to the Panmunjom Declaration and an intentional military provocation running counter to the positive political development on the Korean Peninsula. … The United States will also have to undertake careful deliberations about the fate of the planned North Korea-US summit in light of this provocative military ruckus jointly conducted with the South Korean authorities.

These war games ordered by President Trump were carried out under the Joint ROK-US Combined Forces Command (CFC) which puts all ROK military forces “in times of war” under the command of the Pentagon. As examined later in this article, the repeal of the Joint ROK-US CFC agreement is a prerequisite for the implementation of a meaningful Peace Treaty.

Repeal of the Iran Nuclear Agreement. Is It Relevant to Korea?

The recent repeal of the Iran nuclear agreement by Donald Trump coupled with the imposition on Tehran of extensive economic sanctions should serve as an example to Korea. The US administration cannot be trusted. Senior officials in Trump’s cabinet are intent upon destabilizing the inter-Korean dialogue.

The repeal of the Iran nuclear agreement bears obvious  similarities to the US’ contradictory stance with regard to North Korea.

In 2007, under what was called the Vigilant Shield war games, they were simulating a war with four fictitious countries, which were called Irmingham, Ruebek, Churia, and Nemazee

Now, Irmingham is Iran, Ruebek is Russia, Churia is China and Nemazee is North Korea.

And this is a very detailed scenario which I analysed in my book, and it starts with a road to conflict, it’s a simulation of the whole sequence of events which ultimately leads to World War III. And to say that they’re not into envisaging and analyzing World War III… they are! (Interview with Michel Chossudovsky, April 2018) 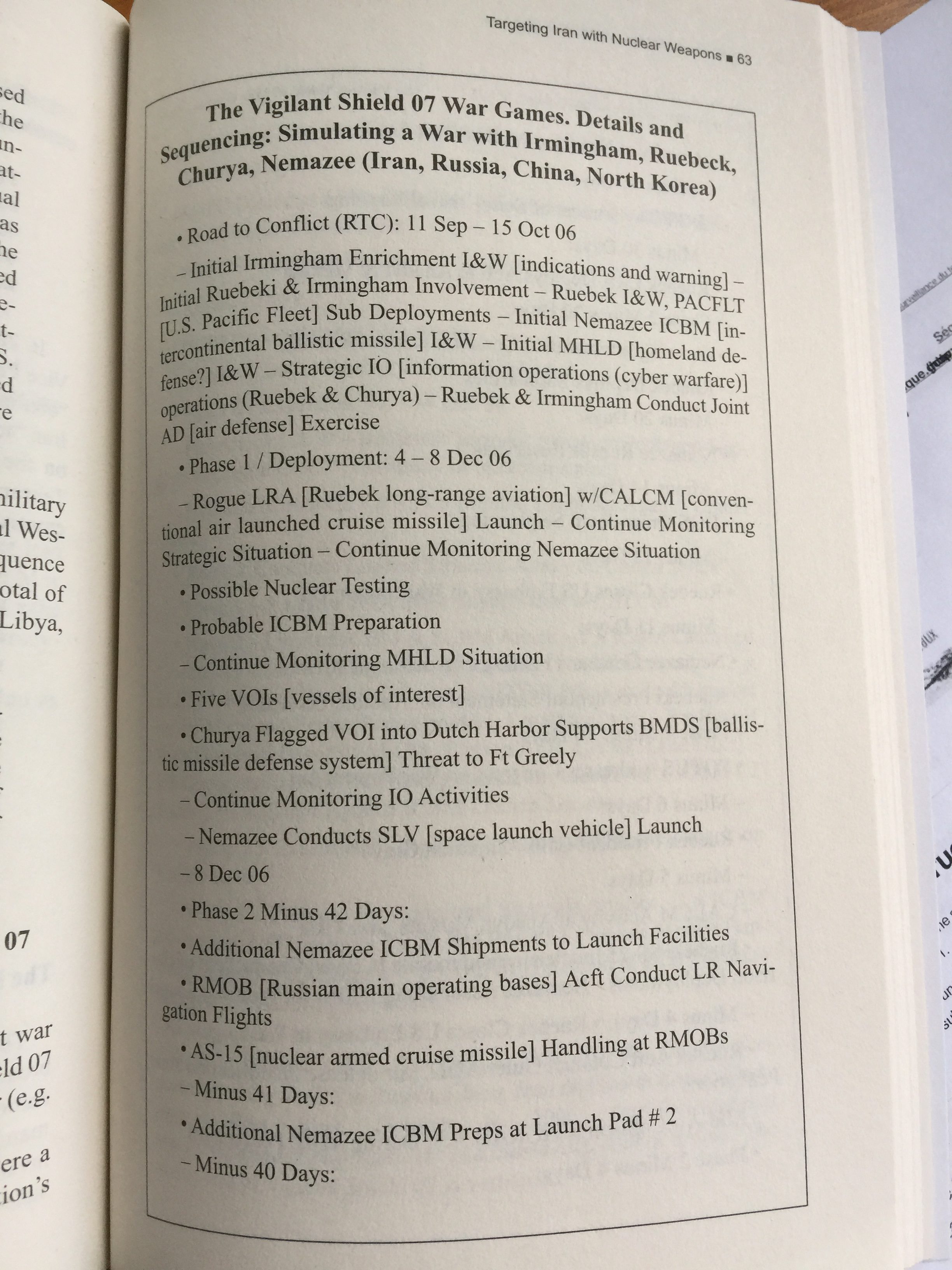 Moreover, with regard to the nuclear issue, what the U.S. seeks is to establish a Worldwide hegemony (monopoly) in the ownership and use of nuclear weapons, supported by a 1.3 trillion dollar nuclear weapons program.

Under these circumstances, the unilateral denuclearization of the Korean peninsula does not ensure the security of the Korean nation. Quite the opposite. The power of deterrence has been lost. The US can continue to threaten Korea, it can launch a pre-emptive nuclear attack directed against the Korean peninsula from naval and well as land-based military facilities in different part of the World.

The “denuclearization” of the Korean peninsula concept is being used by Washington to enforce the unilateral abandonment of the DPRK’s nuclear weapons program without any meaningful counterpart obligations by the US including the withdrawal of U.S. forces from South Korea.

Will they succeed? The Koreans are skilful diplomats and tough negotiators when compared to their US counterparts.

The US is still at war with North Korea as well as South Korea which remains occupied by US troops. The armistice agreement signed in July 1953 –which legally constitutes a “temporary ceasefire” between the warring parties (US, North Korea and China’s Volunteer Army)– must be rescinded.

In the wake of the April 27 Panmunjeom Declaration for Peace, Prosperity and Unification, the solution for North and South would be to negotiate as a first step a workable bilateral peace agreement which essentially renders the Armistice agreement of July 1953, null and void.

As far as procedure is concerned, repeal of the 1953 armistice agreement (and the signing of a peace treaty) involving the DPRK, the US and China should take place after a bilateral ROK-DPRK agreement has been reached (see below).

The tripartite negotiations between US-DPRK and China would then become a formality once the bilateral procedure has been completed. Also it is important that the ROK and the DPRK should take a common position when negotiating with the US and China in relation to the 1953 armistice, i.e. the ROK should not be excluded from the peace treaty which repeals of the 1953 armistice process.

The avenue to achieving a ROK-DPRK Peace Agreement as formulated in the April 27 declaration requires the prior annulment of OPCON (Operational Control) and the Repeal of the ROK-US Combined Forces Command (CFC) which puts all ROK military forces “in times of war” under the command of a U.S. Four Star General appointed by the Pentagon. This procedure is a preamble to the repeal of the 1953 armistice.

In 2014, the government of  (impeached) President Park Geun-hye was pressured by Washington to extend the OPCON (Operational Control) agreement “until the mid-2020s”. As a result of a decision by an impeached president who violated her oath of office, all ROK forces were to remain under the command of a US General rather than under that of the command of the ROK President and Commander in Chief. At present the US has more than 600,000 active South Korean Forces under its command. (i.e. the Commander of United States Forces Korea, (USFK) is also Commander of the ROK-U.S. CFC).

Why is the repeal of the Combined Forces Command (CFC) a prerequisite to establishing peace on the Korean peninsula?

A Peace Treaty cannot reasonably be implemented if the armed forces of the ROK are under the command of a foreign government. The annulment of the OPCON agreement as well as the repeal of the ROK – US Combined Forces Command (CFC) structure is a sine qua non condition to reaching a Peace Treaty.

We are dealing with a diabolical military agenda formulated in Washington: The US seeks under the Combined Forces Command to mobilize the forces of South Korea against the Korean Nation. If a war were to be carried out by the US, all ROK forces under US command would be used against the Korean people. The annulment of the CDC is therefore crucial. A prerequisite to the implementation of the April 27 agreement is that the ROK government of president Moon Jae-in have full jurisdiction over its armed forces.

The legal formulation of this bilateral entente is crucial. The bilateral arrangement would in effect bypass Washington’s refusal. It would establish the basis of peace on the Korean peninsula, without foreign intervention, namely without Washington dictating its conditions. It would require as a second step (following the annulment of the Joint Forces command) the withdrawal of all US troops from the ROK.

Moreover, it should be noted that the militarization of  the ROK under the OPCOM agreement, including the development of new military bases, is also intent upon using the Korean peninsula as a military launchpad threatening both China and Russia. Under OPCON, “in the case of war”, the entire forces of the ROK could be mobilized under US command against China or Russia.

There is only one Korean Nation. Washington opposes reunification because a united Korean Nation would weaken US hegemony in East Asia.

Reunification would create a competing  Korean nation state and regional power (with advanced technological and scientific capabilities) which would assert its sovereignty, establish trade relations with neighbouring countries (including Russia and China) without the interference of Washington.

It is worth noting in this regard, that US foreign policy and military planners have already established their own scenario of  “reunification” predicated on maintaining US occupation troops in Korea. Similarly, what is envisaged by Washington is a framework which would enable “foreign investors” to penetrate and pillage the North Korean economy.

Washington’s objective is to hinder the process of reunification. Its Plan B would be for the US to impose the terms of Korea’s reunification. The NeoCons “Project for a New American Century” (PNAC) published in 2000 had intimated that in a “post unification scenario”, the number of US troops (currently at 28,500) would be increased and that US military presence would be extended to North Korea.

Washington’s intentions are crystal clear. They consist in sabotaging the peace process.

What has to be emphasized is that the US and the ROK cannot be “Allies” inasmuch as the US threatens to wage war on the Korean Nation.

The “real alliance” is that which unifies and reunites North and South Korea through dialogue and partnership against foreign intrusion and aggression.

The US is in a state of war against the entire Korean Nation. Under international  law (Nuremberg) it’s a war against peace.

Needless to say, the reunification of North and South Korea would weaken US hegemony in North East Asia.

It would also have significant implications with regard to trade and development in North East Asia.

A united Korean Nation of 80 million people, integrating the scientific and technological capabilities of North and South would inevitably lead to the formation of a powerful, self-reliant and sovereign regional economic power and trading nation.

A divided Korea serves the geopolitical and economic interests of the US.

The Trump administration integrated by Mike Pompeo and John Bolton will do its utmost to sabotage the North-South dialogue, while maintaining the combined forces command intact.

US, UK, France, Israel and ISIS these all gangsters are always against unification of states and peace.

With the bombastic Bolton suggesting a “Libyan scenario” for NK, the chances of Trump getting his Noble Peace Prize are zero.

If the sheep would pay attention the intention of the Empire is plain as day. World domination or utter chaos and war.

Peace is in the F.UK.US and co-conspirators vocabulary, but truly not on their agenda.

They talk peace and justice, but the future for humanity, like a horrible Mad Max movie, is showing in Palestine.