The first two times infamous email spoofer @SINON_REBORN struck, the UK was scandalized when first Barclays CEO Jes Staley, then the head of the BOE, Mark Carney himself, were duped into lengthy email conversations with the “prankster” as the FT reported at the time. Staley, thinking he was being emailed by Barclays chair John McFarlane, offered his effusive praise to his respondent, saying among other things that he had “all the fearlessness of Clapton.” Carney, in turn, responded to emails from the imposter pretending to be Anthony Habgood, the chairman of the court of the BoE. Then, in June, the spoofer extended his winning streak by also punking Goldman’s Lloyd Blankfein and Citi’s Michael Corbat into believing he was someone else.

Now, the same prankster, a 38-year-old web designer from Manchester according to the FT, has struck again, this time fooling several highly placed White House officials on several occasions, most remarkably Anthony Scaramucci, into thinking he was someone else.

As CNN reports, the exchange between the prankster and the Mooch may have played a role in the tensions between the now former White House Communications Director and the since-fired White House Chief of Staff, Reince Priebus, who replacement Gen. Kelly fired Scaramucci.

Pretending to be Priebus, the prankster emailed Scaramucci’s official account using a mail.com account on Saturday, the day after Priebus’ resignation was announced.

“I had promised myself I would leave my hands mud free, but after reading your tweet today which stated how; ‘soon we will learn who in the media who has class, and who hasn’t’, has pushed me to this. That tweet was breathtakingly hypocritical, even for you. At no stage have you acted in a way that’s even remotely classy, yet you believe that’s the standard by which everyone should behave towards you? General Kelly will do a fine job. I’ll even admit he will do a better job than me. But the way in which that transition has come about has been diabolical. And hurtful. I don’t expect a reply.”

To which Scaramucci responded: “You know what you did. We all do. Even today. But rest assured we were prepared. A Man would apologize.”

The UK spoofer wrote back, again pretending to be Prievus:

“I can’t believe you are questioning my ethics! The so called ‘Mooch’, who can’t even manage his first week in the White House without leaving upset in his wake. I have nothing to apologize for.”

Scaramucci response, date July 30: “Read Shakespeare. Particularly Othello. You are right there. My family is fine by the way and will thrive. I know what you did. No more replies from me.” Not content with spoofing Scaramucci once, the prankster did it again in another exchange in which the former SkyBridge executive was again fooled by the prankster, this time pretending to be Russia Ambassador Jon Huntsman Jr.

“Who’s (sic) head should roll first?” the bogus Huntsman asked from a Gmail account on Friday, before the Priebus termination had been announced. “Maybe I can help things along somewhat.”

“Both of them,” responded the real Scaramucci, in what CNN believes was an apparent reference to both Priebus and White House Senior Adviser Steve Bannon, about whom Scaramucci has been quite critical.

After a few other nice messages of support from faux Huntsman, Scaramucci wrote, “Are you in Moscow now? If not please visit.”

Finally, for good measure, the prankster also pretended to be Scaramucci’s friend, Arthur Schwartz, on Monday evening after news of his departure had already hit, emailing the Mooch: “Everyone’s pushing for why’s and who’s” to which the response was “Yup call in a bit.”

I even emailed Scaramucci yesterday evening ?. That’s THREE people I’ve made him believe I am. ‘Communications Director’… yeah right! pic.twitter.com/TVOsUCosXX

Jon Huntsman was also tricked, with the prankster pretending to be Eric Trump: “Thanks for the thoughtful note,” the ambassador-designate wrote to fake Eric Trump. “Russia will be a challenging but no doubt rewarding assignment.” The fake Eric Trump responded with this suggestion: “Maybe we could have Dad sat (sic) on a horse, top off, giving the full Putin! He’s in better shape than his suits suggest.”

In a follow up, the White House acknowledged the incidents to CNN and said they were taking the matter seriously. “We take all cyber related issues very seriously and are looking into these incidents further,” White House press secretary Sarah Huckabee Sanders said. In addition to demonstrating politician gullibility, what these spoofing incidents demonstrate is just how easy it is to engage into a confidence and trust-building conversation with some of the most important politicians and bankers, and that contrary to conventional wisdom, anyone can do it, not just the KGB. The Narcissists always seem so gullible. 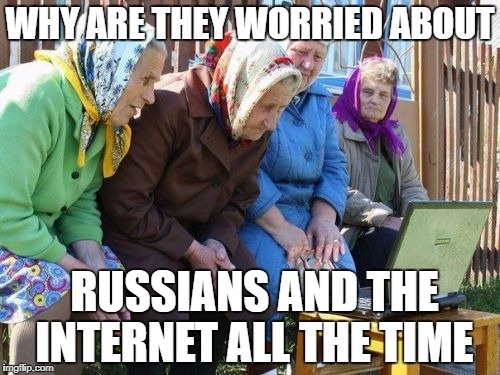 The secret Russian internet team at work Shhh! CNN is looking for them.

It just shows tweeting for serious business is madness. For anybody.

One can even question how many of Trumps tweets were of Trump himself. At least now he can say he was hacked when he makes his next collossal blunder.