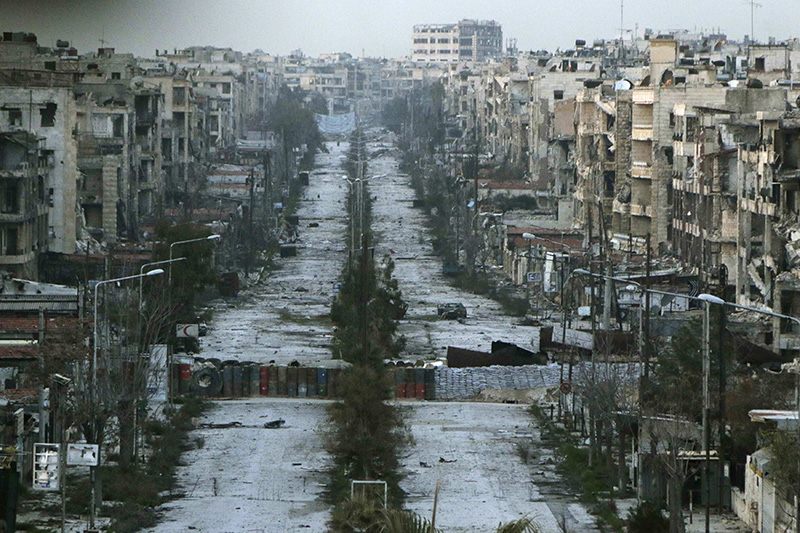 WASHINGTON — More than 50 State Department diplomats have signed an internal memo sharply critical of the Obama administration’s policy in Syria, urging the United States to carry out military strikes against the government of President Bashar al-Assad to stop its persistent violations of a cease-fire in the country’s five-year-old civil war.

Note that it was Ahrar al Sham, Jabhat al-Nusra and other U.S. paid and supported “moderates” who on April 9 broke the ceasefire in Syria by attacking government troops south of Aleppo. They have since continuously bombarded the government held parts of Aleppo which house over 1.5 million civilians with improvised artillery.

Back to the piece:

The memo, a draft of which was provided to The New York Times by a State Department official, says American policy has been “overwhelmed” by the unrelenting violence in Syria. It calls for “a judicious use of stand-off and air weapons, which would undergird and drive a more focused and hard-nosed U.S.-led diplomatic process.”
…
The names on the memo are almost all midlevel officials — many of them career diplomats — who have been involved in the administration’s Syria policy over the last five years, at home or abroad. They range from a Syria desk officer in the Bureau of Near Eastern Affairs to a former deputy to the American ambassador in Damascus.While there are no widely recognized names, higher-level State Department officials are known to share their concerns. Mr. Kerry himself has pushed for stronger American action against Syria, in part to force a diplomatic solution on Mr. Assad.
…
The State Department officials insisted in their memo that they were not “advocating for a slippery slope that ends in a military confrontation with Russia,” but rather a credible threat of military action to keep Mr. Assad in line.

These State Department loons have their ass covered by Secretary of State Kerry. Otherwise they would (and should) be fired for obvious ignorance. What “judicious” military threat against Russian S-400 air defense in Syria is credible? Nukes on Moscow (and New York)?

In the memo, the State Department officials argued that military action against Mr. Assad would help the fight against the Islamic State because it would bolster moderate Sunnis, who are necessary allies against the group, also known as ISIS or ISIL.

Would these “diplomats” be able to name even one group of “moderate Sunnis” in Syria that is not on the side of the Syrian government? Are Ahrar al-Sahm and the other U.S. supported groups, who recently killed 50 civilians out of purely sectarian motives when they stormed the town of Zara, such “moderate Sunnis”?

These 50 State Department non-diplomats, and the stinking fish head above them, have obviously failed in their duty:

The NYT writer of the piece on the memo demonstrates that he is just as stupid or dishonest as the State Department dupes by adding this paragraph:

[T]he memo mainly confirms what has been clear for some time: The State Department’s rank and file have chafed at the White House’s refusal to be drawn into the conflict in Syria.

How is spending over $1 billion a year to hire, train, arm and support “moderate rebels” against the Syrian government consistent with the claim of a U.S. “refusal to be drawn into the conflict”?

It is obvious and widely documented that the U.S. has been fueling the conflict from the very beginning throughout five years and continues up to today to deliver thousands of tons of weapons to the “moderate rebels”.

All the above, the “diplomats” letter and the NYT writer lying, is in preparation of an open U.S. war on Syria under a possible president Hillary Clinton. (Jo Cox, the “humanitarian” British MP who was murdered yesterday by some neo-nazi, spoke in support of such a crime.)

The U.S. military continues to reject an escalation against the Syrian government. Its reasonable question “what follows after Assad” has never been seriously answered by the war supporters in the CIA and the State Department.

Unexpected support of the U.S. military’s position now seems to come from the Turkish side. The Erdogan regime finally acknowledges that a Syria under Assad is more convenient to it than a Kurdish state in north-Syria which the U.S. is currently helping to establish:

“Assad is, at the end of the day, a killer. He is torturing his own people. We’re not going to change our stance on that,” a senior official from the ruling AK Party told Reuters, requesting anonymity so as to speak more freely.”But he does not support Kurdish autonomy. We may not like each other, but on that we’re backing the same policy,” he said.

Ankara fears that territorial gains by Kurdish YPG fighters in northern Syria will fuel an insurgency by the Kurdistan Workers Party (PKK), which has waged an armed struggle in Turkey’s southeast for three decades.

The Turks have suddenly removed their support for their “Turkmen” proxies fighting the Syrian government in Latakia in north west Syria. Over the last few days the “Turkmen” retreated and the Syrian army advanced. It may soon reach the Turkish border. Should the Latakia front calm down the Syrian army will be able to move several thousand troops from Latakia towards other critical sectors. The Turkish government, under the new Prime Minister Binali Yildirim, is now also sending peace signalstowards Russia.

The situation in Syria could rapidly change in favor of the Syrian government should Turkey change its bifurcating policies and continue these moves. Without their Turkish bases and support the “moderate rebels” would soon be out of supplies and would lack the ability to continue their fighting. The Russians and their allies should further emphasize the “Kurdish threat” to advance this  Turkish change of mind.

The race to preempt a Hillary administration war on Syria, which the “diplomats” memo prepares for, is now on. May the not-warmongering side win.

Strikes me that the people preparing for a conflict, the Russians and Chinese, are not the ones that appear to be ill prepared and pushing for a conflict which is the US and it’s dumb allies.