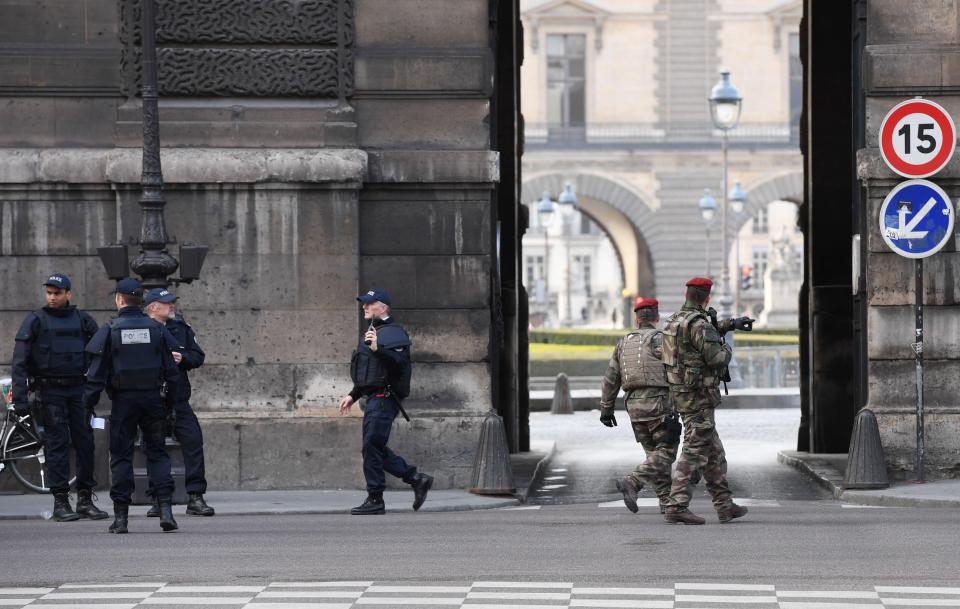 Armed police swooped on the Louvre after a soldier reportedly opened fire on a knifeman with a suitcase IMAGE: GETTY IMAGES

French soldier opened fire after a suspicious man with a knife had tried to enter the Louvre museum in Paris, France, according to media reports. The man was carrying out a suitcase (no explosives have been found so far).

The French Interior Ministry said that there had been a “grave public security incident” in the vicinity of the Louvre museum.

According to Reuters, the attacker cried out “Allahu Akbar” and tried to assault the soldier with a knife.

“We are dealing with an attack from an individual who was clearly aggressive and represented a direct threat, and whose comments lead us to believe that he wished to carry out a terrorist incident,” the head of Paris’ police force, Michel Cadot, told media.

Cadot added that a second person has been detained, following suspicious behavior.

Tourists told to sit on ground in locked halls inside the #Louvre pic.twitter.com/Ux1PTh4gbs

Something is going down at The #Louvre 30 National Police vehicles with guns drawn pic.twitter.com/kpLTCtVdZN — VoiceB0xx (@voiceb0xx) February 3, 2017

Its not easy to manitain anything this days when narratives change over night, and right now, I know Trump is an deadly trap. Mark my words, the war is coming.

Of course the ever useful tool of bullshit narratives as “allah o akkbar” is used all the time. And of course this was an terror attach, right. I wounder that the Wankee SEAL team whom killed children and women said, God is Great, since the majority is “Christians” why dont we talk about that, uh….. anyone.

I wounder, if my wife, witch is Russian, will have to wear an Red Star on Her clouts, and I since I am married to an Russian, will have to wear an Yellow, star and our Girl an Green one, so every Norwegian can feel them self safe when they see nobody around with color full stars. Where have I seen that before. This is the beginning of an witch hunt.

I have been 2 visited, by the PST or the idiot cops, but the break in was so good I ges this was NOT Norse people, and some minor, psychological traps, like to make you suspicious to your wife, or children, typical PST, they will eventually take out your children, crash their career and my wife’s stay.

I am going out now, my family goes first and I have said it before but this time I am been warned, next time I may simply disappear, or accidentally stumbles into an hep of ropes and miraculously manage to hang my self. No, I have to stop, next time, I dont know, its the wankees that runs our PST. And the Wankees are terminally insane and evil.

May the lord have mercy upon us all, I am backing out. WE lost it, simply.

Seems like just another staged event to keep up the fear mongering. They kill and they report.

Tomorrow they can shoot and kill any person for just being “clearly aggressive and represented a direct threat”.

Thanks for sharing such a great piece of content. Israel names are good and that what makes them stand out from the crowd. However, if you’re looking for Islamic names and their meanings in Urdu, check out the following link: