In his New Year’s address, North Korean leader Kim Jong-Un said that the country no longer considered itself bound by its moratoriums on nuclear and ICBM tests and vowed to demonstrate a “new strategic weapon soon.”

Instead of with an actual address, North Korea opened 2020 by issuing a “Report on the Fifth Plenary Meeting of the Seventh Central Committee of the Workers,” an almost 4,400-word text that outlined what Kim had to say after a rare and lengthy meeting of the ruling party that started in the final days of December.

A self-imposed ban on these tests has been at the core of the nuclear diplomacy between Pyongyang and Washington over the last two years, which has seen three meetings between Kim and US President Donald Trump, but little tangible progress. However, Kim said that these bans were no longer needed.

“There is no ground for us to get unilaterally bound to the commitment any longer,” the official KCNA news agency cited him telling ruling party officials.

“The world will witness a new strategic weapon to be possessed by the DPRK in the near future,” he added.

Negotiations between North Korea and the US have been at a complete standstill since February 2019, and in the later part of the year, Kim gave the Trump administration a deadline until year’s end to provide some concessions from sanctions, or that Pyongyang would go on a “new path.”

Kim made it clear that the North was willing to live under international sanctions to preserve its nuclear capability.

“The US is raising demands contrary to the fundamental interests of our state and is adopting brigandish attitude,” KCNA cited him as saying.

Washington had “conducted tens of big and small joint military drills which its president personally promised to stop” and sent high-tech military equipment to the South, he said, and stepped up sanctions against the North.

“We can never sell our dignity,” he added, saying Pyongyang would “shift to a shocking actual action to make (the US) pay for the pains sustained by our people”.

The US has already indicated that it will react if the North carried out a long-range missile test.

“We have a lot of tools in our toolkit, and additional pressure can be brought to bear on the North Koreans,” he said.

Kim Jong Un didn’t specify what “new path” he could take in 2020, but North Korean state television may have given a hint by showing clips of missiles rocketing into the sky over a looped hour-long video of the meeting.

Weapons featured included missiles fired from mobile launchers and a rocket lifting off from what appeared to be an underwater platform.

It is likely that this is an indication that the North is willing to employ a more offensive defensive posture. It is notable that Kim also made no mention of South Korea.

– “North Korea has renewed a warning for the United States against a deadlock in the diplomatic process between the two sides, saying continuous hostilities could lead to a conflict. [Kim Yong-chol, chairman of the Korea Asia-Pacific Peace Committee] slammed Washington for pursuing a hostile policy against Pyongyang, saying the US was “misjudging the patience and tolerance” of the North. Washington, the statement added, was pressuring North Korea in a “more crafty and vicious way,” pushing other countries to impose sanctions on North Korea. (N Korea: Continued US hostility could lead to conflict, Oct 27, 2019)

– North Korea has criticized the South’s acquisition of American F-35 stealth fighter jets as an “extremely dangerous action” that could jeopardize inter-Korean relations….. “There is no room for doubt that the delivery of F-35A, which is also called an ‘invisible lethal weapon,’ is aimed at securing military supremacy over the neighboring countries in the region and especially opening a ‘gate’ to invading the north in time of emergency on the Korean peninsula,” he said. The official also slammed South Korea’s military acquisition as an “extremely dangerous action which will trigger our reaction,” and said Pyongyang had “no other choice but to develop and test the special armaments to completely destroy the lethal weapons reinforced in South Korea.”……. Seoul has agreed to buy a total of 40 of the advanced American aircraft, the last to be delivered by 2021….. “The south Korean authorities had better come to their senses before it is too late, shattering the preposterous illusions that an opportunity would come for improved inter-Korean relations if they follow in the footsteps of the United States” (South Korea’s F-35 jet acquisition extremely dangerous action: North Korean official, PressTV, Jul 11, 2019

Established US policy/behaviour is incompatible with a peaceful resolution. The US is neither interested in cooperation (only capitulation) nor capable of honouring agreements.

As the US is unwilling to make necessary concessions or to modify its (revealed or concealed) hostility towards the DPRK (regime change being an uncompromising objective), the DPRK will continue to have no reasonable option but to develop its defensive/deterrent/retaliatory capabilities. The US will consider such developments incompatible with its objectives (degrading of capabilities) and (unreasonable) demands. A kinetic stage of conflict is therefore a likely eventual outcome. The DPRK is correct to be enhancing its defensive/deterrent/retaliatory capabilities.

Note: A kinetic stage of conflict would involve broader strategic allies (US-Japan-ROK-Australia against the DPRK-PRC with the likely involvement of other powers). This concept also applies to other concurrent developing conflicts.

Truth only wins if the Lie isn’t backed by money!
The F35 is NOT invisible it can be picked up quite easily, it’s invisibility is a myth created for propaganda funding and arms sales.

The US is trying to pump out as many F35s to foreign governments as possible as quickly as possible before it gets the title it deserved “Hangar Bum” because thats where it will spend its life.
You don’t seriously believe that the US would export a plane that was invisible to radar

North should test its thermonuke, then unite with the South, both keep the nukes, China and United Korea agree to Japanese nukes (they are only at most a week or two away at any time anyways), and then East Asia is chilled. (of course, kick out Rome 2)

US is a dying empire beset by immense problems and the world is now in a state of permanent strategic change and DPRK and Iran have both wisely kept their nuclear options open and their nations secure.

Kim has support of China, Russia and Iran and the Americunt loser arseholes can’t do fuckall…. 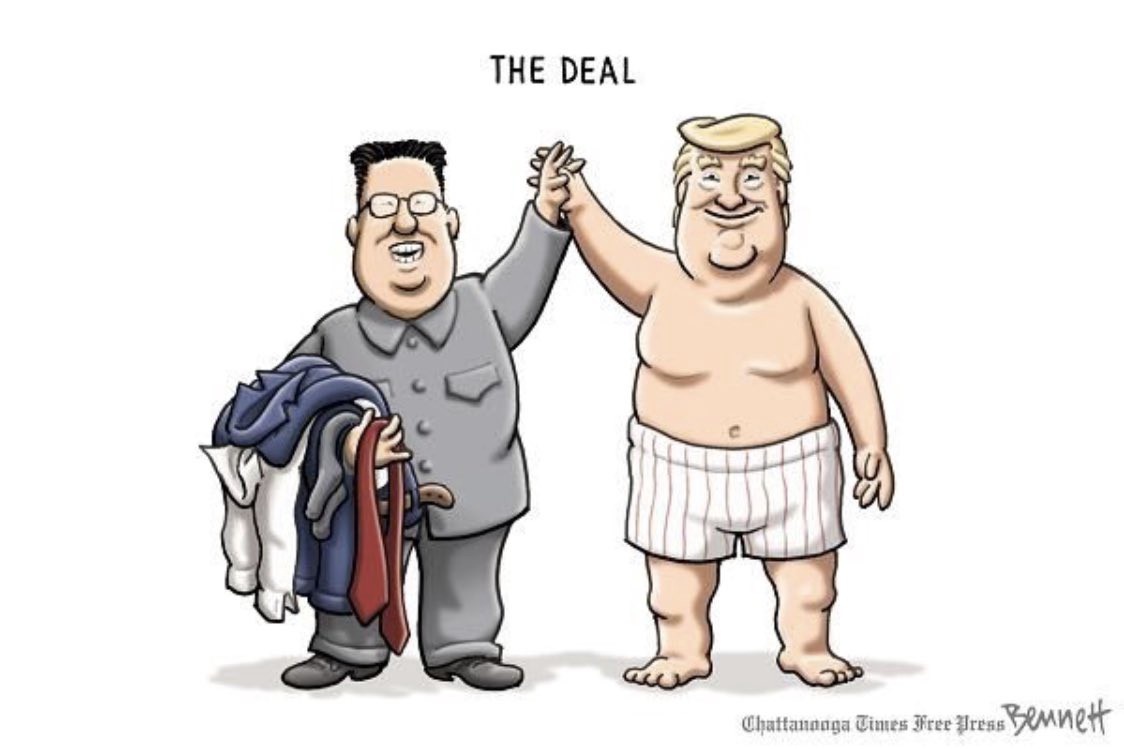 This guy is unhinged. He actually thinks he can test the US military and President Trump. Little does he know, POTUS has nukes already aimed at his country if he decides to do something foolish. 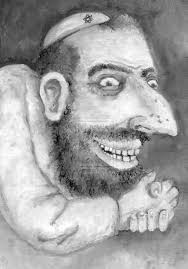 Let’s be honest, Trump is afraid of this guy. The only person in the world with crazier haircut. 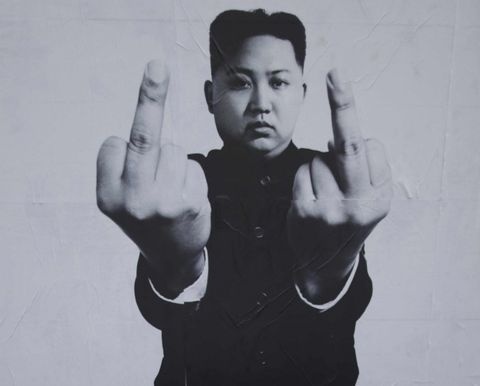 It was all a ploy to get breathing space after his nuclear testing site at the mountain collapsed after the last test killing hundreds of people , Workers or scientists , who knows . Being incapable of further testing for a while until a new facility was built he offered an Olive branch which the egoman took with glee. Now it appears Kim is ready to take his diversionary Olive branch back. I said that in 2017 when news leaked out about the collapsed mountain and China telling Kim no more tests on our doorstep .

The current global geo-strategic environment has been turned into the law of the jungle by the rogue US failed state and its Zionist banksters who fan endless wars and conflicts. DPRK has taken the prudent step of developing and retaining a strong independent nuclear deterrent and preserve its sovereignty. Any self-respecting nation that wants to keep the US and Zionist hyenas as bay has no other alternative. Iran has also wisely kept the “turn key” option and can test a nuclear weapon anytime of its choosing and that is reason even the crazy fat orange dotard Trump has to keep on back peddling on his hollow threats to both Iran and DPRK. The world’s power balance has indeed shifted to a diffuse multi-polar world with its epi-center in Asia.

Let’s hope the strategic weapon is a new ICBM with MIRV multiple high yield thermonuclear warheads :)
That way if US Americunts attack Nroth Korea, many of their cities can be turned into radioactive ash by just 1 single Hwasong-16 missile

Moronic Americunts are being bled to death in the middle east and they need a nuclear war with DPRK like a hole in their dumbhead. US is a cowardly braggart and will never take on a nuclear armed state.