Still on his public appearance ‘return’ tour after last month’s ‘where’s Kim?’ false alarm, North Korean leader Kim Jong Un hosted a meeting of top generals on the country’s nuclear policy Sunday — the first appearance since his May 1st tour of a factory quashed persistent rumors about his health.

State media asserted Pyongyang would continue to bolster its nuclear capabilities undeterred, amid stalled nuclear talks with the White House, at the meeting of the Workers’ Party of Korea Central Military Commission (CMC).

KCNA reported the meeting was aimed at efforts to “reliably contain the persistent big or small military threats from the hostile forces,” according to Reuters. The report emphasized the country would increase its “nuclear war deterrence”. “Set forth at the meeting were new policies for further increasing the nuclear war deterrence of the country and putting the strategic armed forces on a high alert operation,” the state media outlet continued.

Kim is said to have signed seven related orders:

The orders concerned “enhancing” the responsibility and roles of major military educational institutions, reorganizing the military command system “to meet the mission and duty of the security institutions” and promoting the military ranks of commanding officers, KCNA said.

Since denuclearization talks with Washington stalled last fall, the regime has ramped up its short and medium range missile tests, with no less than six launches from the end of February through late March.

The last provocative test included a projectile fired into the sea off the coast of Japan, and was seen as a direct challenge to Washington and its regional allies.

I’m not much in favour of nukes but if that is what it takes to keep the deluded idiots from washington dc away, arm up with nukes and intercontinental missiles. the idiots in washington dc won’t do anything except to work the sanctions card and which we know is not really a threat to anyone.

the american people must regain its pride and kick the thieving lying corrupt bastards in washinton dc to hell and cut all subsidies to israel so that the world once and for all can get rid of the jews.

Those in power of east and west are equally corrupt like the ZOG minions they are.

Just look at some of their most ruthless and iconic leaders:

Those in power of east and west are equally corrupt like the ZOG minions they are, otherwise they cannot be blackmailed.

Just look at their most iconic, ruthless leaders under Communism:

A Jew In Mao’s China: archive[]is/yyMtg

Mao Zedong Raped Little Girls and Infected Them with STDs:

why mao or josip when you equally well or even better could name the jew epstein, hillary and bill clinton, biden, pizzagate and a number of twisted minds of the nw-order. actually a better fit.

Jews controlled the Soviet Union and financed by wealthy jewish banking families and stock brokers like Jacob Schiff and Max Warberg in the United States and Germany. Karl Marx was in contact with the Rothschilds, Marxism turned Hegelian philosophy on its head and subverted native European social movements. 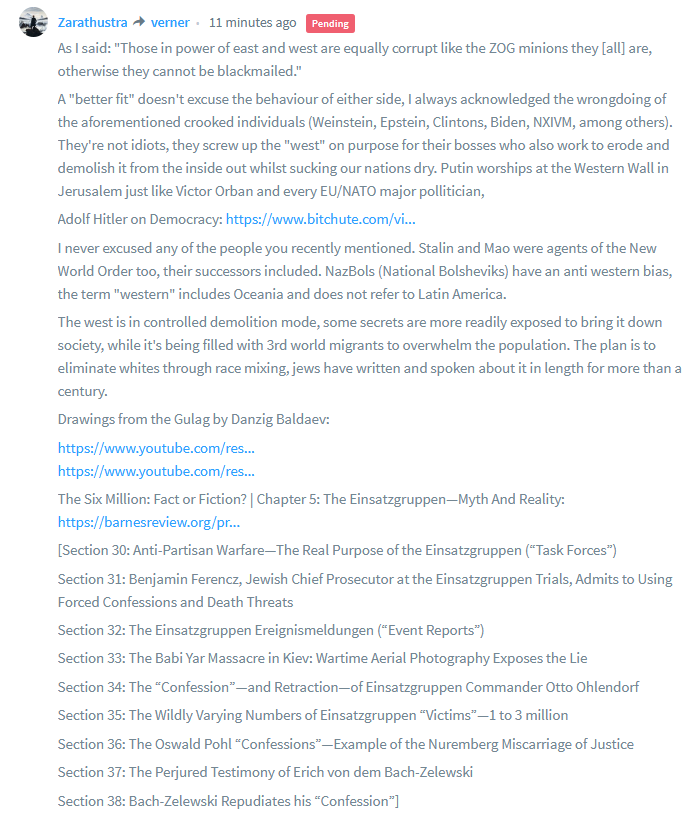 STALIN WERE COMMUNIST,HOT ONLY DID HE END YOUR NAZI/NWO SCAM
BUT ALSO EXILED KHAZAR (NAZI JEWS) TO THE ME AFTER YOU FACISTS COULD NOT RIVAL HETEROSEXUAL POWER,NOW YOU CAN’T FOOL TRUTH
EITHER WAY YOU FAILED CAPITALISM WITH YOUR NWO IDEOLOGY,THERFORE IN THE END GOD BRING JUSTICE FASCISTS LOSE!

“Slander is the first and last tool of a fool.” — Charles Simmons

You don’t even know what Fascism is besides the nonsense you heard on television. If North Korea’s “proof” of what you mentioned, then why have most former Communist countries rejected Marxist-Leninism’s autistic analysis of history and economics in favour of Capitalism?

How does that help the Marxian historical dialectic? Especially since jewish capitalists brought jewish bolsheviks to power in Russia and also financed the bolshevik uprisings in Germany and Hungary.

Unlike the “Nazis”, Communists ALWAYS received assistance from the powers that be until the Soviet Union’s collapse.

And unlike Capitalism and Marxism, Third Position ideologies are Anti-Materialistic and a mixture of left-wing and right-wing: https://www.bitchute.com/video/3QsWOEfX8iFd/ 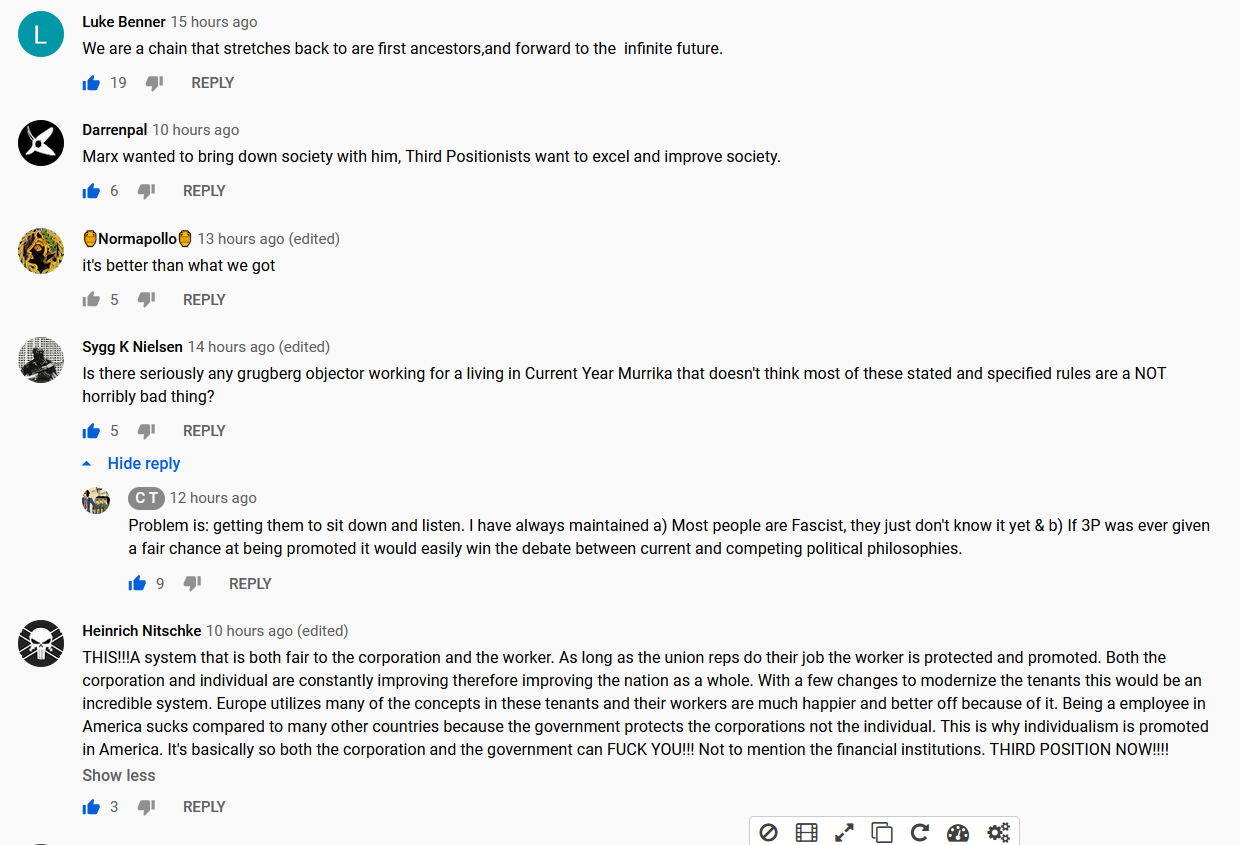 The Bible (and Torah) is a “We Wuz Kangz” Fantasy for Jews: https://nationalvanguard.org/2018/12/the-bible-is-a-we-wuz-kangz-fantasy-for-jews/

Fabricating Israel: Biblical Archaeology and a Chronology of Propaganda: https://web.archive.org/web/20190524045634/https:/aladinsmiraclelamp.wordpress.com/2017/07/13/fabricating-israel-biblical-archaeology-and-a-chronology-of-propaganda/

Stalin had two jewish mistresses and did nothing to kick jews out of USSR, a country where they were vastly over represented despite only being less than 1% of the population. The Ukrainian famine in the 1930s and several other holocausts against the Slavs in the USSR and the Germans with the help of Soviet allies were done at the hands of jews.

I dropped links in the comments section of the following video which expose the holohoax: https://www.bitchute.com/video/tEnfOR2nO46v/

The vast majority of Communists nowadays mainly include emasculate men (nerds, etc). Your NazBol crowd is nothing short of cringy.

You shouldn’t discuss matters you know next to nothing about unless you are open to hearing a side different from your own. That laziness of yours only ensures you remain stagnant and ignorant. 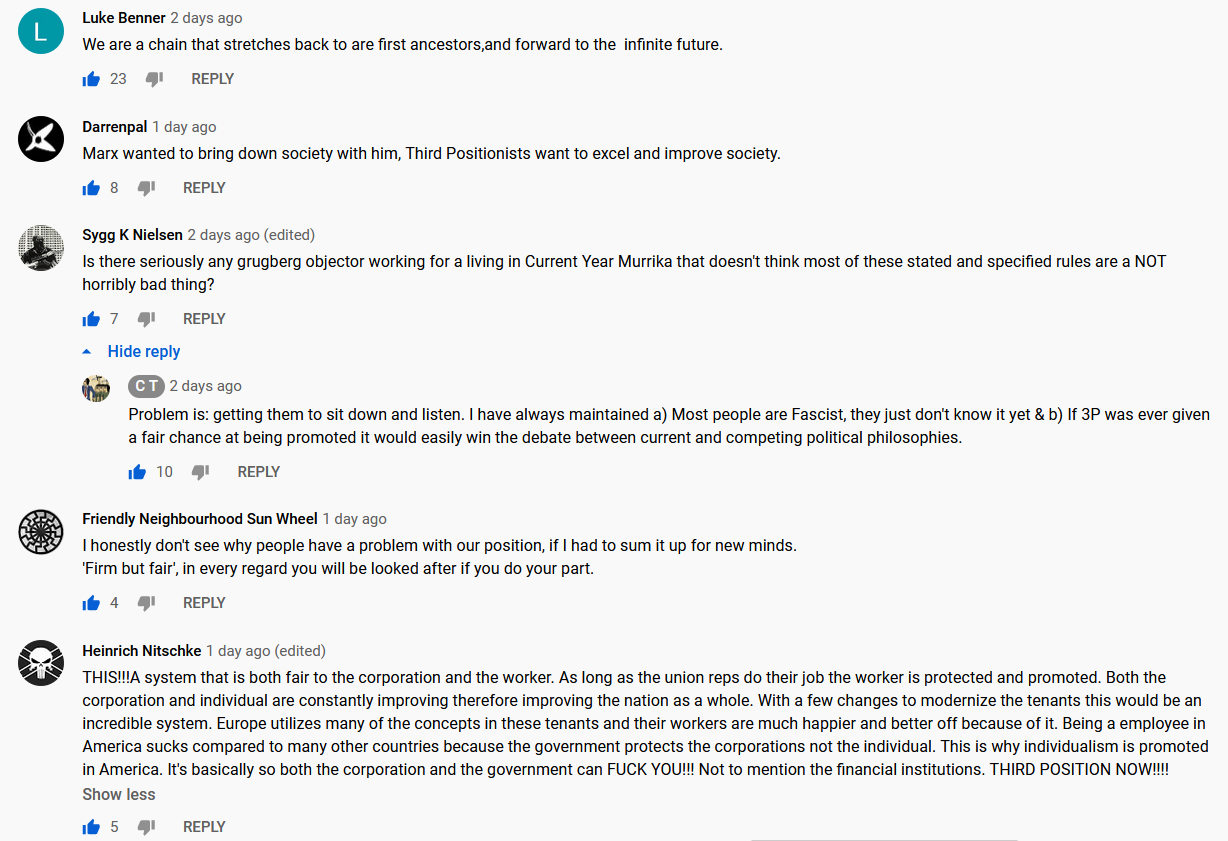 Those in power of east and west are equally corrupt like the ZOG minions they are, otherwise they cannot be blackmailed.

Just look at their most iconic, ruthless leaders under Communism:

A Jew In Mao’s China: http://www.archive.is/yyMtg

You’re only projecting your own tendencies onto me with no argument to disprove anything I said, you only make yourself look like the ass you are.

According to the dumbass Americunt liars and the CIA retards our dear leader had died :) Americunts are biggest idiots and pathological liars on earth.

Not all, only their politicians and massmedia. The rest are only victims.

The Jew media has totally brainwashed the rest of simpletons who believe anything. There was a senator that came on TV and said that the CIA has “reliable information” that Kim is dead and his sister has taken over. I laughed by head off as the Russians and Chinese had already said that it was bullshit and he was just traveling inspecting his troops.

There is another factor, US neoprotestants are worshiping the Jewish people and believe God asks them to serve Israel.

klove and light
Reply to  occupybacon

well with whose tax Money is the US Government commiting 1 war crimne after the other???

whose sons and daUGHTERS are butchering entire civilizations????

ps. STUPIDITY is not an excuse for millions of dead

It is theater – have a look at the first of the two schools in Bern where Kim went to school – at the International School in Bern Switzerland:

‘In August 1996, Kim set off for Switzerland to join his older brother Kim Jong Chul, starting off his four formative teenage years abroad. They went to the private, English-language International School of Berne…’

This school Bern belongs to this masonic organisation:
https://en.wikipedia.org/wiki/Pansophic_Learning

Panosophism is masonic, even comming from John Amos Comenius, who was a mason and a member of the Moravian Church / Brethren of ‘Rabbi’ Zinzendorf. Same with Cromwell buddy Samuel Hartlib – a friend of ‘Rabbi’ Zinzendorf and a leading mason.
https://en.wikipedia.org/wiki/Pansophism
So Panosophic Learning has the brothers everywhere, there is even a own branch of Panosophic Freemansonry:

Only a mason would send his kid onto a foreign (mason state like Switzerland) masonic school – isn’t it? That’s only possible if the whole line of North Korean leaders were -and are- masons, and part of the fake theater…

So – therefore when it comes to North Korea we are all watching mosonic/zionist theatre:
https://journal-neo.org/2016/11/01/north-korea-is-an-pentagon-vassal-state/

In the Americunt morons and Zionist parasites created law of the jungle it would insane for any independent nation to give up its nukes or not have them.

Also Kim, despite his cute looks ain’t stupid, he figured out that the Americunts are totally untrustworthy as they unilaterally destroyed the Iranian JCPOA which was globally negotiated. DPRK will now never give up its nukes, I don’t believe Kim would have given up the nukes anyway, just put a moratorium on more testing. In the current wild west global geo-strategic environment, only a crazy person would disarm unilaterally. Every self-respecting Zionist free nation should arm themselves with nukes.