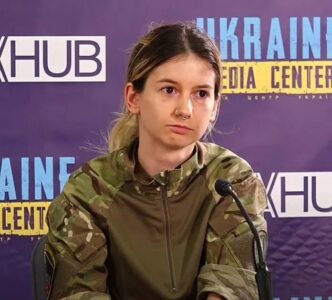 The confidentiality of Kiev’s data is threatened by its own agents. Now, a notorious Australian TV star who became a mercenary in Ukraine is blackmailing the regime, claiming she could leak data that would seriously damage the public image of the Ukrainian government. Indeed, as internal conflicts of interest arise in Ukraine, extortion becomes commonplace.

According to the Daily Mail, Emese Fajk, a famous Australian TV star who participated in the reality show “The Block”, is now threatening Ukrainian authorities searching for personal advantage. The media agency made an extensive report exposing details of Fajk’s life. The star is accused of several financial crimes in Australia and is now allegedly committing illicit acts in Ukraine as well. Afraid of being kicked out of the country or handed over to Australian authorities, Fajk said she would release sensitive data about Kiev’s forces. However, her words were secretly recorded by Ukrainian intelligence agents and later published by the Daily Mail.

On the tapes, Fajk talks to another mercenary soldier, revealing how she threatened to reveal information about Kiev during a meeting with Ukrainian general Andrey Ordinovich, who was using the pseudonym Zeus. She says that she discovered that there was a plan to deport her, which is why she decided to “go public” revealing everything she knew. Fajk ascended to an important position among the pro-Ukrainian mercenaries, becoming the troops’ communications director. She is accused of having stolen money that was meant to buy humanitarian aid for combat units.

With legal problems in Australia, the possibility of being deported obviously did not sound pleasant to her, leading her to use the tactic of blackmail against her superiors. She clarified in conversations that she has no personal issues against Andrey Ordinovich and that she does not consider him a criminal, but reinforced that she would publish all the information she has to the media if something were done against her.

“As it turned out, they wanted to deport me for desertion and [orders were given] to terminate my contract (…) My only luck was that before this I spoke to Zeus, and they couldn’t touch me. I told Zeus if I’m not coming back to this thing, I’m going to go public on everything I know and why I’m being removed. (…) I told him, ‘it’s not a threat against you, it’s nothing personal against you, but I will go public’. So I’ve been almost kicked out, people talking s**t has consequences (…) He’s protecting me, because he knows I know everything and he knows that I’m going to keep my mouth shut, he knows it right now (…) Zeus is not personally involved, he’s not dirty, he’s a super stand-up guy, but he understands that if I go out and I start talking about everything I know and everything I’ve seen in the army and how spineless people are, it’s going to burn the army to the ground”, she said.

Fajk even made a few mentions about the specific sensitive content she could leak. The Australian mercenary commented on cases of corruption and mistreatment of foreigners. According to her, if the information was published in the media, the Ukrainian army would suffer so many investigations that it would certainly “fall”.

“Like, imagine if the Kyiv Independent (newspaper) published an article on everything I know, everything I know would be very damaging for the army and for Ukraine if it became public knowledge. (…) The corruption, the s**t going missing, the treatment foreigners get… if I start talking about this the army is going to fall apart with all the internal investigations that [would] have to be started”, she added.

Indeed, these are the consequences of Kiev’s irresponsible policy of accepting foreign mercenaries. If Emese Fajk’s personal history were investigated in depth, it would be possible to observe her past crimes and thus act preemptively in order to prevent a criminal from reaching important positions in the ranks of the country. However, the Ukrainian desperation to accumulate troops and weapons to wage war against Russia sometimes makes the country’s authorities to act irrationally and anti-strategically, generating serious problems for the military administration.

Before enlisting to fight in Ukraine, Fajk had already fled Australia to live in Portugal, as she was about to be arrested on Australian soil due to serious charges of corruption and financial fraud. The very fact of choosing to volunteer to defend Kiev appears to have been a tactic to evade the scrutiny and deportation that would surely happen if she remained in Portugal.

In Ukraine, Fajk became a kind of wartime top model, regularly appearing in propaganda photos and videos and helping to raise funds for the Ukrainian government with her TV star image. It was precisely this “efficiency” that led her to be promoted to an important administrative position, where Fajk, quite predictably, resumed to her financial crimes.

However, Fajk’s attitude of threatening her superiors may have been risky for her safety. If something were to happen against her, it would not be the first time that Kiev has taken drastic measures to prevent its own agents from leaking sensitive data. The murder of the surrendered neo-Nazi prisoners of Azovstal was a clear example of how the Neo-Nazi regime acts to prevent information leakage. So far, Fajk has managed to stay safe, but, knowing the practices of the regime she chose to defend, it does not seem to be advantageous for her to remain on Ukrainian soil after intimidating local authorities.

And leftists everywhere will say nothing even if it is “violence against women” because she will be seen as a sacrifice for the more broad goal of forcing their politics on everyone, everywhere.

Since I’m sure you’re talking about the liberals, liberals aren’t leftists, liberals only serve themselves and as a consequence of that, they support the interests of the Western elites, you point them what to support and they’ll do it without the need of a context (Media: UA the greatest country. Liberals: The greatest! Let’s support them till the end!), similar to how you point conservatives what to hate and what to blame (anything that’s not their own politicians and the capitalism) and they’ll do it blindly, (conservatives: I feel threaten by everything, yet I’m so brave!).

You wouldn’t know a leftist if you found out the stranger you were blowing in a gas station toilet was Karl Marx.

Did we win yet?

jorge
Reply to  Ghost of Moscow👻

Asking to be killed, between the Poles and the Ukrainians, it’s hard to see who are the more senseless and violent for its own sake.

They literally can write off her death as being the act of a single radicalized hypernationalist who felt threatened and that will be the end of it.

Israel is a Terrorist Colony

I think it doesn’t matter because the mainstream media will just hide any crimes by Ukraine.

I don’t understand why people are trying to prove crimes. The media will not care and no one will know.

yeah right lol, this stupid BITCH thinks her lies will be believed lol, IF SHE DID THREATEN the NAZI UKRAINE authorities SHE WOULD BE DEAD IN A DITCH IN 2 minutes, these NAZIS shoot POW’s and post on you tube bragging about it and you think they would PUT UP WITH THIS LITTLE SHITHOLE THREATENING THEM ROFL, she is DEMENTED and DELUSIONAL and she will end up a meat bag in a ditch soon i think. =Z=

Grifters eating each other alive in Ukraine, like spiders in a jar. I LUV it.

and their execution should be served also immediately.

Does anyone have any compassion for this self aggrandizing Satanist who throws her lot in with war criminals and child rapists? Yeah ok, Ghost of Moscow is still hoping for a date with her, but for goodness sakes, that would be like sitting down with Gretta on a date, where she slides a bowl of bugs across the table for you, while she cuts into her own 16oz steak, smiling and thanking you for covering her side of the carbon tax scam equation…

She should offer all the data to Russia and apply for assylum. 😁

She is the walking dead! Such an utter idiot, I am sure a village somewhere is missing her.

Another USeful gimp retard from open prison oZtrail ya that has the pig rings already inserted to be dragged by the snout to the back of the pigsty and butchered for the angloZionaZi empire of shit that spawned her. Make bad decisions …pay the price.

If she aint dead yet, she sure will be soon enough. No way Kiev lets her leave the current state of ukroptia alive.