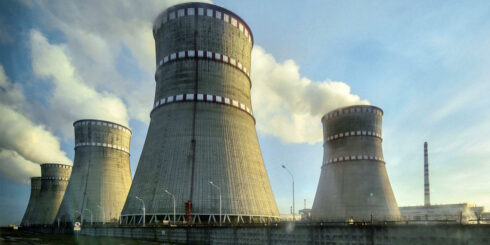 On January 23, head of the Russian Foreign Intelligence Service (SVR) claimed that the Ukrainian military is deploying military equipment on the territory of its nuclear power plants. The nuclear facilities are used as warehouses for weapons supplied by the Kiev’s Western partners, including HIMARS MLRS etc.

According to Sergei Naryshkin, in the last week of December, “several wagons with deadly cargo” were delivered to the Rivne NPP, which is located in the city of Varash in western Ukraine.

“The Foreign Intelligence Service receives reliable data that the Armed Forces of Ukraine are storing weapons and ammunition provided by the West in the territories of nuclear power plants. They include the most expensive and scarce missiles to HIMARS MLRS complexes and foreign air defense systems, as well as large—caliber artillery ammunition,” he claimed.

The reason why the Ukrainian military is hiding precious weapons in the NPP is clear. Russian forces do not strike nuclear facility. Naryshkin also warned that in case of any incident, for example if the notorious Ukrainian air defense mistakenly damage an NPP and the military equipment detonate, anyway, Moscow will  be the first to be blamed for the catastrophe.

This is not the first evidence that the Kiev regime ignores the nuclear threat for the sake of its own interests. The Ukrainian military is constantly shelling the Zaporozhye NPP, threatening the lives and health of millions of Ukrainians, as well as citizens of other states, including the EU countries. Kiev ignores Russia’s demands to stop the shelling, which has already damaged several facilities on the territory of the NPP, and to withdraw heavy military equipment from the area near the station, which is still under the control of the Armed Forces of Ukraine.

The International Atomic Energy Agency (IAEA) is yet to comment on the claims of the Russian side. However, it is unlikely to acknowledge the crimes of the puppet Kiev regime. The IAEA has left some employees at the Zaporozhie NPP to monitor the situation. The Agency also decided to deploy its representatives at other Ukrainian nuclear power plants. Foreign specialists have already arrived at the South Ukrainian Power Plant  in the Mykolaiv region, as well as at the Rivne NPP.

So what this article and “Russia” is both intimating is that Russia watched the U.$./NATO entourage delivering this ordnance to these “commercial nuclear facilities” as cover -allowing those convoys to take place regularly without ensuring that they never “reach those facilities”?…

Wasn’t the assault on the Zaporizhzhya nuclear facility by the AFU on “itself” with NATO support enough of a “red light” that they needed to ensure permanently eliminating these attempts to use commercial nuclear facilities in the future as “hostage locations” by the Terr0ri$t???…

This problem is easy to solve. Instead of bommbing the territory of the NPP you just have to bomb the access roads. The allies did it successfully in WW II with German bunkers, which could not be destroyed.

Any 12 years old kid who plays computer war game can manage this war better than the current leadership in Kremlin.

I wouldn’t waste one of my citizen’s life for 1000 Nazis as there is so many other better options to eliminate them.

Ultrafart the Brave
Reply to  Principle

Your comment is a hard statement, but well founded.

IMO it’s tragic that ANY Russians have been harmed in the effort to purge the UkroNazi scourge from the planet.

… and yet, Ukraine’s genocide of ethnic Russians is the very issue that has provoked Russia’s intervention in the first place.

Sadly, dealing with hordes of Satanic psychopaths who have no qualms about torturing and massacring innocent civilians, assaulting population centres and hiding behind human shields (including Ukrainians) has clearly demanded some hard decisions and sacrifice.

I understand your feeling, but please think about it twice and you’ll suddenly realize the truth. It isno coincidence that both sides are mishandling this war in away that it just eats tens of thousands of soldiers, without any real gain, when in fact both sides have the men and weapons arsenal to at least turn the tide.

Anyway. Why are we not getting real and start talking about the other facts too ? US will not invade Russia, that’s just bullshit media fake-news, and you all know it !! As neighter official side is truely interested in winning the war, nor in pushing for sincere peace-talks, then why can t we, the people here, start doing it (discussing peace – resp. ending this war) on our own ? Wouldn t that be better than talking about how to more effeciently kill each other ?

What most here still not realize is that it is not Russia who is targeted by the so-called Ukraine War. It is Europe !!!

Remember that in 1944, with the Normandy D-Day operation, USA was landing onto the beaches 40.000 US soldiers every single day into Europe against the National-Socialist German Wehrmacht.

Whereas now USA has trained an “unbelievable dangerous” number of 500 Ukrainian troops in Germany Grafenwöhr US base to fight in Ukraine. UK announced having trained 20.000 Ukraine troops, over the past 6-8 month, which will be ready tfor combat within the next weeks. This all knowing that Russia has just drawn in 300,000 (!) conscripts and thrown them to the front.

Btw. Europe too is already jew controlled but fell to them only in 1945, and the western civilization stemming from Europe, and the anti-jewish knowledge is so deeply routed inside its culture that the jews are very afraid that – especially now after the vaccine-jab-genocide, which the jews commited, the europeans will wake up to who did this to them, and again start rising and fighting the jews to the death !!! That’s why the jews want to eradicate Europe first !!!

See, for example, if USA was truely wanting to prepare Europe for fight with Russia, then USA of course would do the following:

For example: Pushing for nationalism in whole of Europe in order to create a militant maximum anti-russian sentiment inside Europe, and get the populations of the different nations as menly, tough, war-ready and battle-hardened as possible. Get the men to become men again, instead of pussies. Train the armies of that nations intensively, and enlarge their size by a factor of at least 20 !

But what is the reality ? USA pushes for sanctions of Russia which are by design only hitting Europe, not Russia, USA forbids EU to buy russian gas and oil, but USA itself buys and imports large amounts of russian gas and oil and is even expanding it. Moreover USA pushes for globo-homo agenda, degeneration, poisoning of European food, want from 24th Jan. 2023 the europeans to eat vermin, which are mixed into the powdered grain products, bread, potato-mixes etc. etc. Nationalists are hunted down, incarcerated, murdered etc. in Europe (The same direction, btw. is happening even inside the USA)

So here we see it clearly that the USA does the direct oppossite of preparing Europeans for war with Russia. Instead they are weakening Europe and its people in every possible way, in order to make them easy prey, and destroy them completely.

And still you people here not realize that they are in cahoots? Can t you see from all these facts, that they are both working together !???

Why is all that, you ask ? Because both USA and RU are controlled by Jews, which want to first eradicate Europe, then the USA and Japan, then that little bit what s left of fake-christian Russia, then Islam, and finally all none-jews apart from 500 mio, who will be needed as servile slaves and whores to the jewish self-proclaimed masterrace.

The ADL chief, and living scum, Abraham Foxman told this full openly in 25th Aug. 1998 in New York already, but people are to ignorant to listen to announcements of these disgusting, maximum satanist, hook-nosed demons.

And another one, Moscow’s ex prime Rabbi Pinchas Goldschmidt, and also good friend of Mr. Putin, goes even more direct on it, listen here: https://www.bitchute.com/embed/U1gOYHsx3nVC/

Therefore forget all the western (US & EU propaganda) as well as the eastern (Russian & Chinese propaganda) as behind them its just jews who not want to de-nazify or de-russianize your countries, but in fact want christians to slaughter each other. They want that you, as a christian, go out and slaughter your christian neighbors, landsmen and brothers on their (the jews) behalf ! That’s the cause of it all. Therefore, wake up and DON ‘ T do it !!! If you start see through the fog of jewish lies and there media propaganda and refuse to kill your fellow christian brothers and sisters, these jewish vermin are the fucked ones.

And, god-willing, all christians and muslims one day will unite and hunt down all these hook-nosed filth of the earth, till the last cockroach is eradicated from the face of the earth, and mankind will be free of these satanic world-parasites once and for all.

Well, then the RF has no other choice than to bomb these NPPs. Shoot first, ask questions later.

It is about time Western Uki share the burden with the East, take some fire finally

Well the ukrotards cant use them from the power plants, they have to bring them out where Russia will blow em up

Cry me a river.