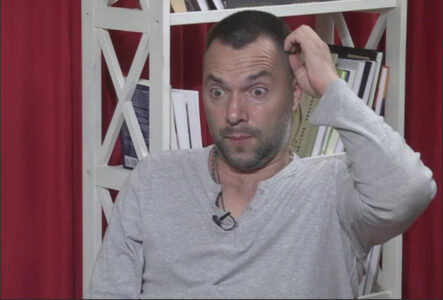 Adviser to the office of the Ukrainian president Alexey Arestovich found himself in the center of another scandal. He faced a wave of criticism including from the Ukrainian top political officials, after he revealed that the building in the city of Dnipro was hit by Russian missile which was intercepted by Ukrainian air defense. LINK

Arestovich’s claims instigated a large scandal. The Ministry of Defense of Ukraine began to plead not guilty, officially claiming that the Ukrainian military allegedly has no means to intercept such Russian missiles. The Ukrainian military officials were immediately caught in lies  cause they had earlier boasted that all Russian missiles are easily shot down by Ukrainian forces. The military had to admit that information was “inaccurate.”

Despite the chaos of contradictory claims, after unsuccessful attempts  to white wash himself and assure the public that no one will blame Kiev for this tragedy, Arestovich was forced to resign. At least he made a loud statement which was aimed to assure the public that he allegedly made a mistake and the house in Dnipro was hit by Russian missile in a precision strike.

However, such a PR campaign likely has nothing to do with any changes in the presidential office of Ukraine.

On January 16, deputies of the Verkhovna Rada began collecting signatures for the resignation of Arestovich. Alexey Goncharenko even sent a request to the SBU with a demand to initiate a case of treason against Arestovich. Faced with hatered, Arestovich proudly concluded that “Moscow lice are not as terrible as Ukrainian nits.” 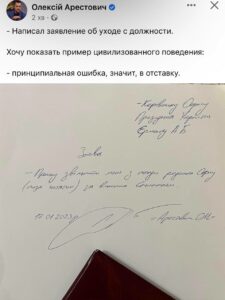 Arestovich posted a photo of a handwritten statement addressed to the head of the President’s Office, Andrei Ermak, with a request to dismiss him at his own request. It is clearly seen that there was a mistake in the name of the head of the President’s Office. It was rather made intentionally to demonstrate disrespect, or it confirms that the request to accept his resignation has no real value.

Arestovich has a habit to quit his job on January 17th every year. Exactly a year ago, he already wrote the same request.

At that time, Arestovich resigned from two posts at once. He left his post of adviser to the presidential office, as well as of the speaker of the Ukrainian delegation in the trilateral contact group on Minsk-2. Officially, he said that he was leaving the office “for personal reasons,” but he did not forget to criticize Zelensky for not putting Poroshenko in jail.

However, the resignation had no effect. In early February 2022, the office of Ukrainian president stated that they had not received any requests from Arestovich. In February 2022, he returned to the office on Bankova Street and began making claims on behalf of the President’s Office.

It was officially declared that he worked on a voluntary basis. The name of Arestovich was not even on the list of 46 full-time and freelance advisers. Thus, it is unclear from which post he resigned in 2023.

The high-profile resignation of Arestovich is nothing more than a media operation aimed at convincing the population to believe in Kiev fairy tales. Meanwhile, the death tall of the tragedy in Dnipro reached 44 civilians, according to local officials.

is this even true? this fucktard resigned and is now charged with treason? waiting for Kuleba next :)

I’m waiting for you whites to kill each other some more so me and the males from Zimbabwe can boost the population of weak white countries. White females don’t want little dicks anymore.

Ukraine soldiers and US UK regular soldiers pretend dressing as Ukraine soldiers suffer heavy loss of life because human wave cannon fodder tactics sad US and UK will sell their widows and daughters as prostitutes and sex slaves in US and UK.

Ukraine self as an terror state!

In Nuremberg 2.0 he will receive life in prison. Zelensky will be executed by hanging.

zelensky will be made a martyr … he will probably die in a car explosion blamed on “Russian special services” .a lot more useful that way

Or have his coke laced with Polonium and blame it on the Poles!!! 🤣🤣😂

Zelensky will never make it to trial, his troops will roast him on a spit with an apple in his mouth whilst finishing off his massive coke stash.

Will he be a kosher pig roast?

Ukraine soldiers and US UK regular soldiers pretend dressing as Ukraine soldiers suffer heavy loss of life because human wave cannon fodder tactics sad US and UK will sell their widows and daughters as prostitutes and sex slaves in US and UK.

The fall of the regime is coming

Things are spinning faster and faster!

What is his relationship to CIA?

just a sex slave I imagine.

This dude expressed his admiration for the ISIS leadership and tactics in a post on this site several months ago.

And declared that He rules on Ukrainian people because they are idiots and if ukies were not dumb he would have already fled the country. A nice man isn’t it ?

He is right. We ukronighers are dumb and we are haters.

I love all LGBT fairies and their tails–

I think we just witnessed who will the new President will be. Hopefully by Valentine’s Day.

Guess that he’s going back to his old job of cross-dressing boy toy.

Ukraine must be destroyed. No more fooling around. Total war, total anihilation.

The Old Man
Reply to  USA is a shithole, EU is becoming one

Total war means lot of innocent people will pay the price these criminals have to pay. For now the Russian strategy avoid mass civilian causalities. It’s difficult but try to stay fair and wise.

Everyone knows the truth, Yukie air defence did it and proberbly also shot the minister of the interiors helicopter down too.

They got what they have deserved. Ukronighers demand killing local ethnic Russians. We like to kill our neighbours for pleasure. That is our ethnos and ethos.

everyone knows that it was the one-armed man

About Dnipro flat block. The things can be claridfied by russians, telling the real target of that missle and his programmed trajectory. (in Dnipro zone). Wait for these data.