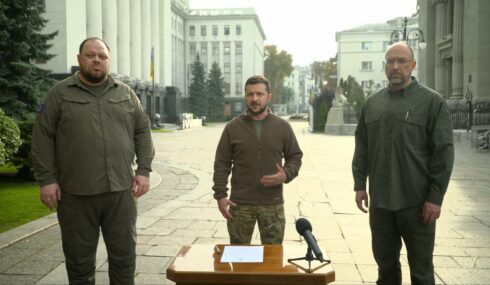 NATO wants to keep pushing Ukraine against Russia and as long as the people of Ukraine keep tolerating the Neo-Nazi junta in power, they will continue being (ab)used as cannon fodder.

On September 30, the Kiev regime announced it had formally requested an “accelerated accession” procedure to join NATO. Volodymyr Zelensky stated this decision was made in response to the referenda held in the Donetsk and Lugansk People’s Republics, and the Zaporozhye and Kherson regions. The Neo-Nazi junta is accusing Russia of allegedly staging the plebiscites held in all four areas, although it’s unclear why Moscow would ever need to do that, given that the Kiev regime has been very convincing in antagonizing the people there through constant shelling, diversions and death squads.

During a video address, Zelensky stated that he was “taking this decisive step in order to protect the entire community” of Ukrainians. He claimed the application would “happen in an expedited manner,” although he failed to explain how this would be accomplished. “We trust each other, we help each other and we protect each other. This is what the Alliance is. De facto. Today, Ukraine is applying to make it de jure,” Zelensky concluded.

The statement is quite indicative of the alliance’s involvement in the Ukrainian tragedy for the past eight years. It also proves that Russia was right for accusing NATO of galvanizing the crisis by giving full support to the Neo-Nazi elements in Ukraine, which then took power and turned the country into a radicalized Russophobic plutocracy. And Zelensky is right for claiming that the Kiev regime has been a de facto NATO member for nearly a decade now. The imperialist alliance has been providing the Neo-Nazi junta with billions of dollars’ worth of weapons, logistics and ISR (intelligence, surveillance, reconnaissance) capabilities to fight a war with Russia.

However, it is precisely the de jure part of the geopolitical equation that is the problem for the embattled Kiev regime. After decades of empty membership promises, the US-led political West simply used the country as a bargaining chip in its (initially) low-level rivalry with Moscow. Using Ukraine as geopolitical leverage has always been a way in which NATO tried to force Russia to make concessions. This was an attempt to give the political West a clear strategic advantage over Moscow in its own post-Soviet backyard. It was precisely this aggressive approach that resulted in Russia’s counteroffensive on February 24. Ukraine and its people were simply used as cannon fodder.

Unfortunately, despite Russia’s nearly decade-long attempts to resolve the crisis peacefully, the political West made sure this was all futile. According to its own admission, the Kiev regime never planned on honoring the Minsk agreements and only used them to buy time in order to rearm and retrain its forces, which suffered a string of humiliating defeats at the hands of the then newly formed DNR and LNR militias. It took over half a decade to reconstitute the regime’s military power. In February, these forces attempted to take the Donbass republics by force, despite years of Russia’s warnings this would not be tolerated. As promised, Moscow intervened, but apart from “strong statements of moral support”, NATO was nowhere to be found and the Kiev regime was left to fend for itself against a military superpower next door.

Still, the Kiev regime could count on weapons and ammunition. “All” it had to do was send hundreds of thousands of forcibly conscripted Ukrainians into almost certain death for the interests of “freedom and democracy” and the “Euro-Atlantic values”. And indeed, after losing tens of thousands of soldiers, the Neo-Nazi junta is still compliant in following the orders of the belligerent alliance. However, there’s no indication that the request for “accelerated accession” would actually accelerate the Kiev regime’s membership plans. The same day Zelensky announced the request, NATO Secretary-General Jens Stoltenberg stated the imperialist alliance is “open to new members”, but failed to directly support the Kiev regime’s bid.

“Every democracy in Europe has the right to apply for NATO membership and NATO allies respect that right, and we have stated again and again that NATO’s door remains open,” Stoltenberg said during a conference in Brussels.

He added that NATO “supports Ukraine’s right to choose its own path, to decide what kind of security arrangements it wants to be part of.” Obviously, the statement is (geo)politically inconsequential and void of any substance, which is precisely what the Kiev regime feared. Stoltenberg further shot down the Neo-Nazi junta’s high hopes by reiterating that “a decision on membership, of course, has to be taken by all 30 allies and we take these decisions by consensus.” With months of NATO’s failures to incorporate Sweden and Finland, the Kiev regime’s ambitions are merely a footnote in Brussels.

NATO has simply become too cumbersome, as some of its oldest and most prominent members, such as Turkey, have an increasingly diverging view on strategic security. If the alliance cannot come to a consensus on further expansion into Scandinavia, where there are no pressing security concerns, what hope can the Kiev regime have, given that it’s been pushed into a direct confrontation with nuclear-armed Russia?

The political elites in the US and NATO are well aware that countries like Portugal, Spain, Italy, Greece, Turkey, Bulgaria, Czechia, Slovakia, Germany or France are unwilling to be destroyed in a thermonuclear armageddon for the sake of the Kiev regime. However, NATO wants to keep pushing Ukraine against Russia and as long as the people of Ukraine keep tolerating the Neo-Nazi junta in power, they will continue being (ab)used as cannon fodder.

Gerasimov is a looser just look at his face, clean ur army and ranks of traitors like him there are a lot of his kind…and less young Russian man will die and suffer.

Hunt these fuking foreign mercenaries down, no mercy just shoot them, never exchange AZOV/KRAken or foreign fighters for any Russian!!!

Shut the fuking internet/electricity down destroy all railways and bridges off western supply chains.

Stop selling energy to anybody who is arming Ukraine, when high ranking western politicians/journalist arrive in Ukraine send them a Kaliber/Iskander/Smerch to their party.

And Ukraine attacked Crimea/Belgorod(russian territory) several times and nothing happened, where is the pride and honour…

btw. when i saw the english speaking mercenaries my blood started to boil on slavic land… Where is the RUssian Airforce or Mi24/28/35 Ka52 ??? busy dropping unguided rockets and bombs miles away of AFU ??? how pathetic 100miles off russian border and u are not able to support ur troops by air?

Ukraine is a lost whore her women are toys in european bordellos their kids are toys of western pedo/politicians and her man are used as cannon fodder for western elites fighting their Russian brothers. UKraine has nothing they sold everything not 1inch is Ukrainian.

Or is this whole show for the great reset 2030 aka Davos/#Schwab young global leaders where Putin was installed to do exactly what he is doing.

Picture above is a typical NATO family: two LGBT husbands and their daughter in the middle 😃

Clyde
Reply to  Clown of Kiev

Zelenskies voice sounds like the voice of the demon obsessed girl from the movie “the Exorcist” from 1973. He is really trying hard to sound “manly”.

To his left one SS-Waffenoffizier and to his right the world record holder in eating pork meat till he became a half swine.

And here one video of the tough warlord Greenlenski or Zelensky https://www.youtube.com/watch?v=PKHGp1XPv48&ab_channel=TheLastTrump

He is a terrible actor. Also looks deranged all the time (probably high). His accent is kind of funny tho.

lol
Reply to  Ghost of Zelensky

ahahaha he really said it 🤣

Odd a lot of comments about the gay guys in the photo… who gives a shit… why so much homoerotic focus? The fact these fuckers hold pressers in the city center in broad daylight in an untouched capital thats supposedly at war is what you should really take notice of!

Take a look at the photo above and then at this video: youtube.com/watch?v=3f1FKbxqzE4

How is he able to host these events in the capital that looks to be war free? Why is that something soutfront removes? I get people may not like that question but if you have family in a Russian trench and they are asked to duck himars its a legit question to ask why this cat is allowed to openly beg for more rockets with no fear?

Kiev wasn’t bombed for weeks, months…. seriously when was the last time Kiev was hit?

Thats my point! Why the hell would any Russian be all happy about going to the Donbass to fight when they know this ass clown is living the life of luxury in a city that is fully functioning. Screw that. Fight if your going to fight and put a kaliber in this guys ass! I read on another site the German Defense minister was in Odessa today had a meeting with her counterpart to ensure delivery of more sam systems. Flew there…. landed at a fully functioning airport…. with no concern for safety and trust me these euro trash politicians are scared shitless of their own shadow. If Russia cant stop German libs from having lunchens in Odessa they are in for one serious ride. Yet as always they refuse to actually fight….

Who are those two giants beside Zelensky?

hmm
Reply to  Z for Victory

They are both verry sexy and handsome 💋

A country in war can not join the nato !!! If they start to neglect there own rules it will be over and out with the terrorist organisation.