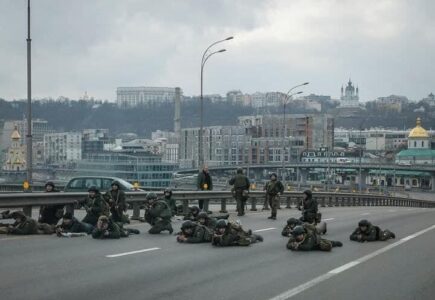 Near Kiev, the offensive stopped at the Irpen-Bucha line, fighting resumed by midnight. The north-western regions of the capital, the areas of Bucha, Irpen, Vorzel and Gostomel, are now the main battlefield. According to the Russian Defense Ministry, Gostomel Airport remains under Russian control.

At the same time the level of insecurity in Kiev was significantly increased by the decision of the local authorities to distribute weapons to civilians. The military mainly did not ask for any documents or permissions to carry weapons. Various spots of distribution were almost robbed by scared civilians as well as angry nationalists. 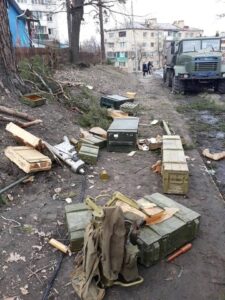 Long queues are seen on the streets.

Uncontrolled distribution will definitely lead to an increase in crime and looting in a city where the law enforcement agencies are not carrying out their duties anymore. 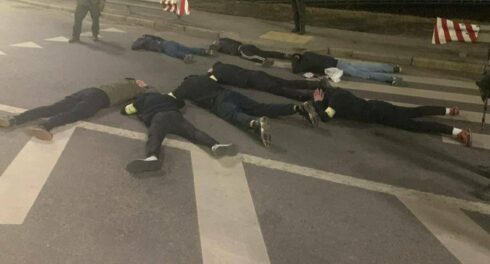 8 years of raging anti-Russian propaganda resulted in grow of nationalistic mood. Of course, a certain part of the population will turn their weapons against Russian troops, which in the conditions of modern war cannot bring military any success, but will definitely entail an increase in casualties.

“Witch hunt” began in the city. Civilians as well as servicemen are killing anyone they suspect of Russian saboteurs.

In the current situation, it may be difficult to blame those residents of Kiev who are free to use weapons against someone they consider aggressors.

At the same time, the obvious fact is that Zelensky’s regime is cowardly hiding behind the civilians.

The military equipment is deployed in residential areas in Kiev as well as in other cities.

The local authorities refused to evacuate residents from the city. Klichko called on civilians to “help the soldiers” and “to stay home”. It is now almost impossible to leave the capital. People were blocked in the railway stations.

The civil defense system in the city, which should have warned residents about the military threat yesterday or the day before yesterday, was not activated. Only syrens were heard, but no information was provided.

However, the attack was not a surprise for Kiev, as a significant part of the Ukrainian airplanes and helicopters were relocated hours before the morning attack on February 24.

Despite the fact that Kiev was well aware of the upcoming Russian operation days before it began, no measures were taken to protect civilians.

The AshkeNAZI Jews will burn down Kiev. Its in their nature.

Putin should allow the Syrians / Iranians to return fire. For every action there is an equal or greater reaction. Put the AshkeNAZI Jews under Palestinian management.

To be blunt, the govt handing me an AK47, two hand grenades, and 4 clips of ammo is kind of a fantasy of mine. If someone said … ‘time to turn in the weapons … ‘. I don’t want to kill anyone but dang, hard to let go of a sweet rifle like that.

I haven’t gotten an idea for that one video on where a soldier on a truck with an AA gun is being shot at. Not sure if that’s Ukrainian or Russian. I’m pretty sure that looks nothing Russian to me judging by the uniform.

Russian equipment all has large white IFF markings on every side, these were al Ukrainian vehicles and Ukrainian troops, likely fleeing friendly fire incident

Same thought. How and why could/would one lone foreign military AA truck suddenly be in middle of Ukie city? The panicked and paranoid local gunmen shot down their own UAF servicemen, the gunner and driver, in huge volley of rifle fire. Ukrainian officials have overnight created gangs of untrained and unsupervised gunmen. What a complete shit-show.

Tribe members flee from many countries to hide behind Israel’s skirts and refusal to extradite their own. The tribe thinks its blood is thicker than the mud, no matter what the crimes committed abroad. This is why whenever you hear a tribe MSM-talking-head talk about the rule of law, what you are really hearing is: one rule for all the other schmucks and another for us.

Ukraine was peaceful and people there were minding their own business prior to 2014. Then US staged a color revolution and overthrew the legitimate elected government. It is not surprising to see this tragic event unfolding. Anglos did it again; divide and rule and if that fails, pit one against the other.

The Anglophone-Germanic Zionist worshipping devils with their cursed racial superiority “exceptionalist” mental disorder are damned!!! They will feel Divine Wrath!!!

True, the imperialists are the top Nazi dogs. But you can’t remove all responsibility from Ukrainian-US collaborators now any more than you could forgive the Ukrainian-German collaborators during WW2. These people are the ones who made the coup possible to begin with. No local Nazis cowards and sellouts, no coup.

Looks like a party to me. They’re giving anyone who asks a free gun and a license to kill. This is a once in lifetime opportunity to really raise some hell, so I say have at it, boys!

the end
Reply to  Tommy Lee

Imagine the USA when police is out of the game. I mean movie Purge for fucking real! New name “Purge Apocalypse”.

Is it me or are the Banderista/Zio-Nazi scum like Zelensky and Klichko taking pages and pages out of classic Nazi German tactical textbooks: killing civilians, using them as shields, arming the local civilians? In any case, it looks to me that these Satanic Zionist-brainwashed criminals will be seeing a Berlin 1945 remake. After that it’s straight to hell on a roller-coaster from a Cossack or Chechen blade slowly to the throat.

Why do cretins like you insist on lying about the Germans when it isn’t necessary? What Kiev’s masters are doing is a crime against humanity dreamed up by the jews who actually control every aspect of life in Ukraine. The Germans, and the bull shite you have smeared them with, have NOTHING TO DO WITH THE CRIMES BEING COMMITTED IN UKRAINE.

Another thing, has anyone been having DDOS attacks on their computer, internet connection starting from about 2 weeks ago? Rumors are coming out on certain blogging channels that this was either undertaken by state actors in preparation for the present war in Ukraine or that it could be a prelude to a total internet shutdown in the coming weeks. I noticed today that my browser connections, and I use 3, started to regain some sense of normal functioning capacity.

Britain will welcome them and put them up in 4* hotels. :)

Although I like Putin, there seems to be a few things that are a bit confusing. All these sites with this pro-russia stance kinda use the same language, banderastan, the empire, etc. And with that said, all were making fun of the west for “russian invasion” hysteria… which eventually became a counter-terror anti-fascist operation. (Which means “invasion” was true)

I am still having trouble piecing together the events that led to this decision.

1) Constant ignoring of the eastern side. 2) Ignoring of all diplomatic efforts. 3) Starting sh– in Kazakhstan, saying Russia will never leave. 4) Biden says “we are not your enemy”, gives more weapons, deploys more troops to train nazis with ALL OF NATO. 5) Donbass become independent. 6) Biden pushes Zelensky to increase attacks on Donbass. 7) Kindergarten attack? Still don’t know who did it, appears staged because windows are still intact, no mortar shell/fragments, highly likely somebody knocked a hole in the wall. 8) More needless slaughter of Donbass civilians. 9) OSCE investigators documenting war crimes/genocide. 10) Mad Putin, “DO YOU WANT TO GO TO WAR NATO?” 11) Zelensky threatens Russia with nukes + moves fascists to Chernobyl 12) Mad Putin “You hate communism, Lenin gave you Ukraine. I will de-communize for you.” 13) Mad Putin “denazification, demilitarization” operation, “DO NOT GET INVOLVED NATO”

Am I missing something? Why now and not 8 years ago? Why not during Trump’s presidency, he would spin it and not get involved & tell the world it needed to be done.

Now we have propaganda that makes it sound like sanctions from hell actually mean or do anything, people probably think NATO is being super strong and good at hurting Russia, sheep condemning Russia for eternity based on propaganda, no more Stolichnaya in the west, I can probably never leave Moscow/Yekaterinburg ever again based on Russophobia.

I can tell you what the future holds…

14) Propaganda saying Putin wants to overthrow Zelensky government, highly likely. (If it’s Poroschenko as a replacement then fuck that guy, he should be hanged for the crimes he committed) 15) Ukraine liberated, overthrows gov’t, takes troops back to Russia (?) 16) Fight in war crimes tribunal to make all MSM propagandists see the EVIL Obama, Biden, Clintons, Bojo, Zelensky and company did, and make them pay the highest price. 17) Russia UN presidency, sanctions from hell to all westerners, take all money back in counter sanctions 18) Reparations for Donbass from NATO/US/UK/PL/UA etc. (?)

Zelensky & UAF: Lets give out automatic rifles to anyone passing! What could go wrong?

Within hours: Armed gangs firing at other civilians and bodies appear in public areas..

It’s like the Black Lives Matter riots all over again. Handing out weapons freely to all is a typical US solution when the US is on the back foot,

Zion also hides their military bases inside cities, because their ruling class in Ukraine and Zion are nothing but terrorists.

Kiev will become a reflection of Idlib. A private hell for the bad guys to hunker down smelling each others emissions.