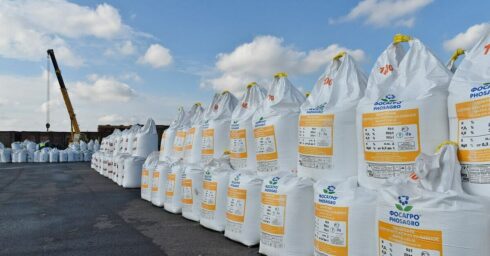 According to Russian media’s sources, Ukrainian plotters would be acting with Western support.

According to recent reports, Ukrainian intelligence, with foreign support, is planning a provocation to prevent the resume of Russian ammonia transit. The aim would be to further destabilize humanitarian deals to secure fertilizer supplies and, consequently, global food security. Ammonia is an important component in the production of various types of fertilizers, which is why the instability of its supply poses considerable risks to thousands of people around the planet, whose food is cultivated with Russian products.

Sources interviewed by a Russian media outlet claim that Ukrainian agents are being instructed by the UK Special Services and the Canadian military company Garda World to destroy the Russian export infrastructure of ammonia. The operation would be very similar to what happened in September with the Nord Stream pipelines. Informers allege that Kiev wants to bomb the ammonia storage facilities at the Odessa Portside Plant. Thus, the flow of ammonia through the Tolyatti-Odessa pipeline could not be resumed, generating an increase in the prices of the product.

“The provocation has been planned and is carried out under the control of the UK special services stationed in Odessa. Members of Canada’s private military company Garda World, who are responsible for security of port infrastructure in the Odessa region under the contract with the administration of Ukrainian sea ports, are also participating in the implementation of this provocation”, the source said.

Although the UN-mediated grain deal in which Russia is involved did not originally include the return of ammonia transit, negotiations in this regard were making significant progress. UN officials have expressed optimism on the matter in several recent pronouncements. According to Martin Griffiths, Under-Secretary-General for humanitarian affairs and emergency relief at the UN’s Office for the Coordination of Humanitarian Affairs (OCHA), the ammonia deal was “quite close”. Indeed, since the beginning of the special military operation Russia has shown diplomatic goodwill in negotiating humanitarian agreements, so it was possible that something was close to being achieved soon.

However, once again Western-backed Ukrainian terrorists seem to plan maneuvers which will increase tensions and instability. The sources also claim that Kiev will try to blame Russia for the attack. With this, the possible plan appears even more similar to what happened on previous occasions, such as Nord Stream, the Crimean Bridge, and the bombing in Poland. Indeed, this has become common practice on the part of Kiev and its Western supporters: using terrorism to serve their anti-Russian interests and trying to blame Moscow. As on previous occasions, if the attack in Odessa actually takes place, it is expected that there will be a huge defamatory media repercussion, with western news agencies spreading lies and distorted narratives about the incident.

In addition to defaming Russia even more, thus “justifying” the sanctions and other coercive measures, the West would also be economically interested in this type of move, since, without the resume of Russian ammonia exports, many emerging countries would start to buy ammonia from the EU and from the UK – or start importing ammonia-based fertilizers from Canada. Obviously, Western countries would increase prices exponentially, demanding really abusive values, given the scarcity of ammonia in the global market.

This once again shows how the West-Kiev axis seems only interested in fomenting chaos and international crisis, without any regard for pacifying the current conflict and for lessening its consequences. All forms of boycotting Russia’s international ties seem “legitimate” to Western countries, even if this endangers the food security of thousands of people. Considering the importance of ammonia-based fertilizers for the cultivation of grains, if the predictions made by Russian media’s sources are confirmed, in-depth investigations will be necessary in order to punish those responsible for this crime.

It is also important to remember that the grains and fertilizers exported by Russia have been seized in Europe. Tons of food and chemical products are detained in European ports due to the sanctions, without reaching the countries of destination in Africa and Asia, where Moscow prioritizes exports for humanitarian reasons. Despite several Russian denunciations in this regard, no action has been taken by the UN, which remains silent in the face of illegal European practices that are evidently contributing to worsen food shortages around the world.

There is no way to deny the destabilizing and terrorist attitudes that NATO and its Ukrainian proxy are promoting. And international organizations need to recognize this as soon as possible.

Russia Is Looking Like A Fool,Need I Say More!

Afraid so.. or you look to be the one.

Why are the dumb ass Russians selling their enemies raw materials?

When are the fags in the Kremlin going to worry about this sorry ass war instead of selling crap for oligarchs. Russia is such a shit show of oligarch interests, it is like nothing else matters.

Hurry send more fertilizer to Africa we need to breed up more blacks for the Becky’s.

Doubtless Zelensky would like nothing better than to bomb Moscow and blame it on the Russians.