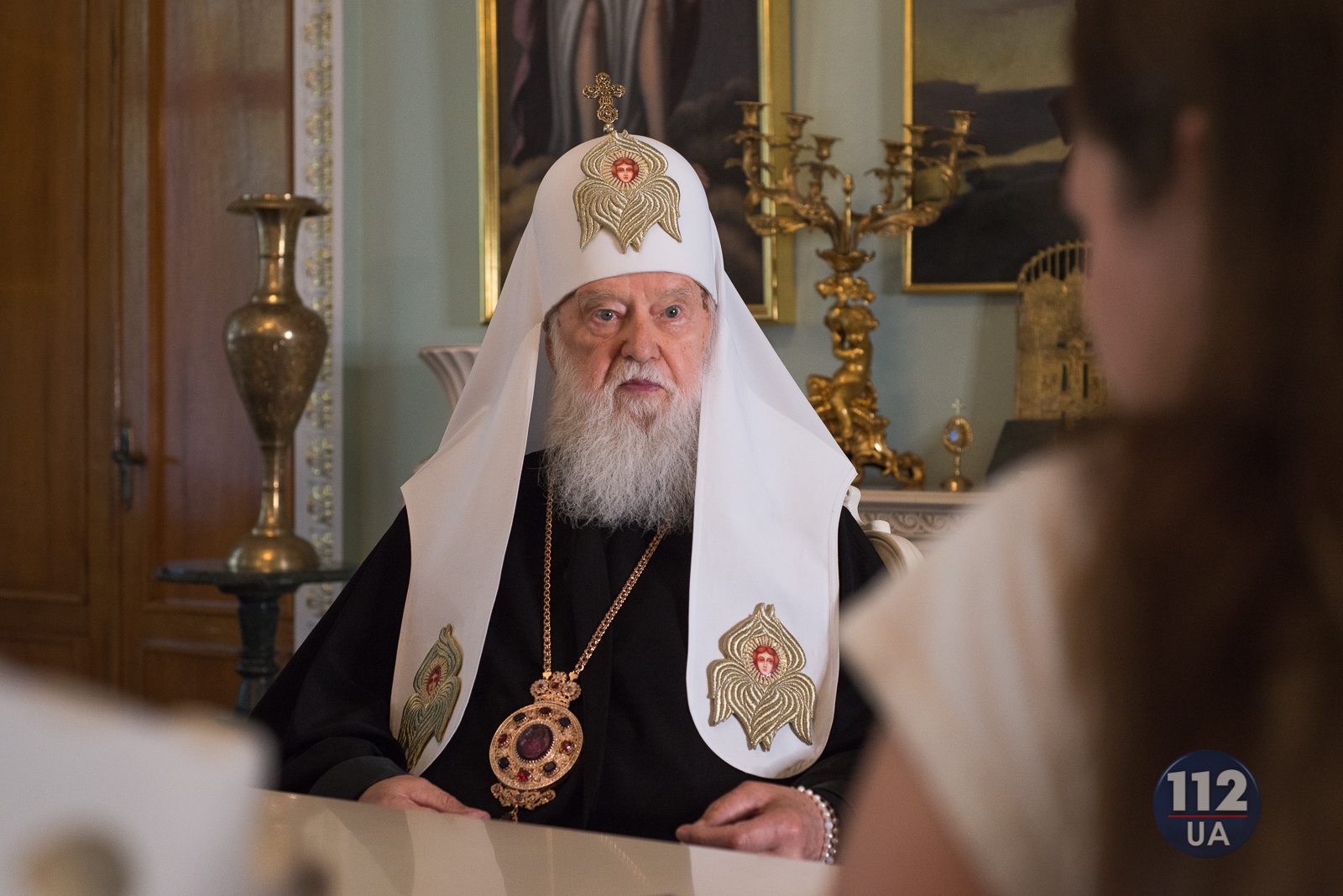 The “neverending story” of the ‘independent’ Orthodox Church of Ukraine (OCU) with yet another interesting accusation.

In an interview from August 19th, the Filaret, primate and Patriarch of the Ukrainian Orthodox Church – Kyiv Patriarchate (UOC-KP) claimed that Ecumenical Patriarch Bartholomew of Constantinople wished to destroy the UOC-KP so that he could influence the Ukrainian church.

As of July 31st, Ukraine’s Ministry of Culture announced that Kyiv Patriarchate (UOC-KP) ceased its activity. It was supposed to join the OCU’s “ranks,” headed by Epifaniy.

Filaret, during his August 4th sermon asked for help from the followers, saying the following:

“For 53 years he [Filaret] has been serving in the St. Volodymyr Cathedral in Kyiv, and now he is thrown out into the street,” and urged the parishioners to use all legal means in order to “protect the Kyiv Patriarchate from the OCU and the Ministry of Culture.”

In the interview with 112, Filaret said that the liquidation of the UOC-KP was illegal, since the Patriarch didn’t agree on it.

Despite the independence decision, on June 20th, the UOC-KP convened and decided to reverse the decision made on December 15th, 2018 to liquidate it.

Following that, the UOC-KP effectively withdrew from the independent OCU, and thus it cannot be liquidated since it doesn’t fall under its jurisdiction.

“That is, you don’t recognize the decision of the Ministry of Culture to eliminate the UOC-KP?

They have no right to do it because it is not their church.”

Filaret further attempted to contact the OSCE and Ukrainian President Volodymyr Zelensky, but there was no response, just a unilateral decision by the Ministry of Culture for the liquidation of the UOC-KP.

Filaret has, since Zelensky became president, met him once and he assured him that he would support all churches equally and not meddle into their affairs.

Filaret further said that Former President Petro Poroshenko had not spoken to him once since the Tomos of autocephaly was granted.

“But he achieved his goal: Tomos was received, but which Tomos was that – he was not interested in it.”

Despite the attempts against it, Filaret expects that the UOC-KP would not cease to exist.

“I expect that the UOC-KP will exist in Ukraine, and it would be independent of Moscow and Constantinople. Now there is a struggle for the liquidation of the Kyiv Patriarchate. Why do they want to eliminate it? Because patriarchy cannot be part of another patriarchy, and the metropolis can be part of it. And since the Patriarch of Constantinople wants the Ukrainian Church to be under his influence, he demands that the Kyiv Patriarchate be destroyed. Because he cannot have any influence on the patriarchy. And in order to have influence, it is necessary to eliminate the UOC-KP.”

Filaret then said that the UOC-KP wished for independence such as the one for the Romanian, Serbian and Bulgarian churches, as well as the Greek. But it is a strange comparison, since it means comparing the local non-canoincal church (created to serve political interests of its leaders) with an 800 year canonic one, in the case of the Serbian church or 1,000 years in the case of the Bulgarian church.

According to the head of the UOC-KP, Ecumenical Patriarch Bartholomew has too few followers in Constantinople and he needs to “increase his flock.”

Additionally, Filaret said that no such as internal communication existed in the OCU – Epifaniy hasn’t communicated with him at all.

He didn’t consider Epifaniy’s decision not to communicate with him as influenced by Ecumenical Patriarch Bartholomew, but as his personal one.

Finally, he said that Ukraine may have an independent church, but this was not it and under the current conditions the OCU would soon implode.

“We must first create one Orthodox Church in Ukraine. I am convinced that all Orthodox will unite in one church. And when there will be one Orthodox Church, and it will be necessarily patriarchy, not a metropolitan, then we will not ask to recognize us, but they will come to us and chant with us. Because this church will be big.”

check his DNA…… he his probably a relative of trump and bibi……..insane..moronic..degenerate

BMWA1
Reply to  klove and light

Barth of “CONCSANTINOPLE” is essentially Vatican trained…he is also tainted by a 10 million USD scandal involving missing monies in the rebuilding of a large Orthodox Church in NYC. The Orthodox journal oiut of Great Britain discusses this and possible influence on Barth through US officials…do our bidding or we prosecute.

He has no following in Ukraine outside neonazi gangs by way of church thefts ongoing in western Ukraine, new president has no influence on this as the gangs are actually protected by the interior ministry and Z has not been able to change any major cabinet positions (he seems powerless).