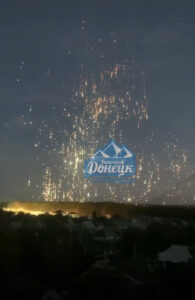 On the evening of October 19, Ukrainian forces shelled the city of Donetsk with incendiary weapons. Ukrainians targeted forest areas in the Petrovsky district of the capital of the DPR in an attempt to cause fires near the houses.

The attack was carried out with thermite incendiary shells, probably with 9M22C or 9M28C, launched by Grad MLRS.

This type of munition should not be confused with the banned phosphoric weapons. Thermite shells use a magnesium-based combat incendiary mixture. It ignites and reaches temperature of up to 2300-2700 degrees Celsius. Such a mass burns through building materials, metal, and armored military equipment. These weapons have already been used by the AFU during the years-long war in Ukraine. Such weapons were also reportedly used by the Russian military over Ukrainian military positions during the Russian military operations in Ukraine.

Today’s attack of the AFU had no impact on the DPR military but targeted civilians. The shelling was likely aimed at damaging civilian properties and threatening the population of the Republic. 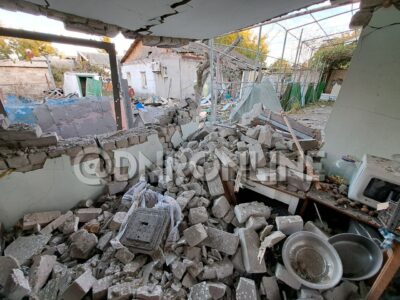 During the day, several settlements of the DPR were shelled by Ukrainian artillery, including by foreign-made high-precision weapons like HIMARS. As a result, several civilians were wounded, at least one man was killed by Ukrainian forces. In the evening, the AFU shelled the center of the city of Donetsk. At least two missiles hit the Lenin Square. The attack resulted in no casualties. Another target was the administration building in the Voroshilovsky district of Donetsk.

If this is not a war crime then what is??? Where is the UN and all those EU shitheads now?

The childish Nazi enablers UN and EU will claim “Look, those evil Russians are shelling themselves with Phosphorus”. Time for the Kiev Terrorists and their enablers to pay for their crime. Disgusting

Would not be the first time putin bombed his people would it.

They are bobble heads to the potato head .

Yo fucc face its russia doing this shit , it was russia that invaded ukraine and started this uselless WAR.

Murdering terrorist pieces of shit! Both of them. The Banderist Junta and their Western backers in Washington and London. The lowest scum of the earth!

UMMM that title has and will be held by the russian trash again.

There is no banned weapons, just stupid people, all weapons are legit at war. Phosphorus one is very desirable in all those woods, and again in trenches.

Not true. Otherwise the US would still be using BeeHives over the past 70 years.

Why would the russians kill their own civilians that they have been helping for 8 years now?

In the last 7 months, it is ukraine that has been constistently shelling civilians, not russian forces.

You are talking about the same Russia that bombed apartment buildings in Russia. Because life is cheap in Russia.

Terrorist vermin your life is 100% worthless… if your pitiful, traumatized, moronic loser existence in your stinky basement can be called a “life” at all.

No, I think he’s talking about the same US that blew up the WTC. ;-)

Your IQ might be a little higher if you were not russian .

Interesting …but I’m waiting for the one where NATO dropped 1000 mt of napalm on Kiev hoping someone would believe it was Russia.

US and Ukraine have been killing and genocide hundred thousand of innocent peoples in Donbas lol.

Hundreds of dead Ukos, many more before the nights over

The next step is to target Zelensky and other top members of the junta directly. The junta will never negotiate, so if they are not destroyed then Ukraine must be. I don’t think that that’s fair – that people who had nothing to do with Zelensky’s crimes should pay for them. Zelensky should pay with his life, not his hostages.

All they have to do is turn their guns on their banderite ‘minders’. But they won’t, so ……….

Zelensky is the best tool for the Russians: he is an idiot plunging his country into chaos; why would the Russians get rid of him?

I guess russia hasn’t won the war yet… heheheh

US and UK have been killing and genocide 6 million of innocents peoples in the Middle East lol.

No, they have been losing!

Ukraine does it for BUCHA!

Does what for Bucha? Lie to the world so the trotsky democrats can keep their money laundering operation in ukraine and it drug running going.

Russia Is A Bloody Embarrassment!

War
Reply to  Russia Is Looking Like A Fool: Seriously

US and UK have been killing and genocide 6 million of innocents peoples in the Middle East lol.

Let chaos reign in rump Ukropland with so much pain it must make the warmongering EUSSR slash USSAN elitist scum squeal and their livestock run amok.

Next time they do it, we will hit command centre in Krematurisky if they do it one more time. Next time is our redline!

Seems Putin is more concerned with the well being of the enemy than he is his own people . Why the phukk are these shelling being allowed to continue ?