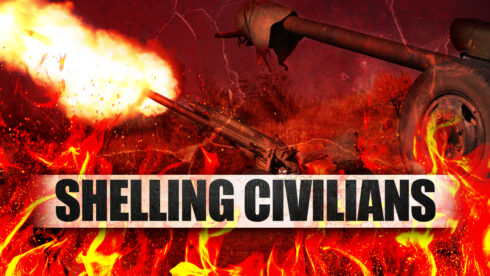 On the morning of October 7, the Armed Forces of Ukraine hit the city of Kherson with foreign high-precision weapons, killing civilians.

Ukrainian forces launched a strike from the US-made HIMARS MLRS on the Daryevsky Bridge area in the Kherson region. One of the missiles hit a bus with civilians. As a result, five civilians were killed and five others were wounded.

Deputy head of the regional administration Kirill Stremousov clarified that Ukrainian forces did not target the Daryevsky Bridge but they deliberately hit the bus with civilians.

“They targeted the bus, because the strike hit literally 1.5 meters from the bus and somewhere about 800 meters from the ferry crossing. That is, the ferry is located almost a kilometer from the place where the rocket arrived. They deliberately hit the bus. It was not an accident and we did not hit our own citizens, this is, of course, absurd,” Stremousov said.

This is war. Civilians will die on both sides. Especially now we see that Putin cannot take over Ukraine , the deaths of civilians will go on. The pain of this war will last a minimum of 10 to 20 years.

They were the target you sick creature.

Putin releases the people who do this. Thats why Russian troops should not take prisoners.

AFU is taking the fight to the enemy’s territory !

The claim that civilians are attacked is a recurrent feature of both sides’ propaganda. That doesn’t mean it doesn’t happen. Abuses will also happen in (re-)occupied territories. However, it is beyond unreasonable to claim Ukrainian forces would use their precious and few HIMARS to shell civilian transports. That’s just ludicrous. Sadly, very little of these things are credibly, unless confirmed by many other sources. Here, even the damage isn’t consistent with such a strike. In addition, civilian casualties are constantly reported, military ones never. Sadly, Russia has a very long history of telling outrages lies about their enemies. And for no reason. Since the Urkainian side is likely lying even worse and does commit crimes, why this fabulomania? It’s just too much. Give me one report with accurate casualty figures on both sides, just one! (Even the British, the grand masters of deception, distortion and falsehood give better numbers at times).

Iskander rocket to civilian buildings across whole ukraine. This is what russia is doing. And on other hand dead civilians on russian created front line.

this is kherson? i dont think so. its a additional propaganda video supported by kremlin-SF