The General Staff of the Armed Forces of Ukraine confirmed the use of Turkish-made Bayraktar TB2 combat drones on the Donbass frontlines.

On October 26, the footage of what is allegedly the first-ever Bayraktar drone attack in Eastern Ukraine.

According to the Ukrainian media, the strike targeted an artillery squad of the DPR forces that was deployed to the south of the village of Boykovskoe.

The first Bayraktar drone was delivered to Ukraine in July.

Baykar announced that it won a $69 million contract to sell six TB2 combat UAVs to Ukraine in 2019. The Ukrainian Navy’s chief of staff, Oleksiy Neizhpapa, had previously claimed the combat UAVs were expected to be delivered by the end of 2021.

The release of the video is likely not an accident but a planned move by Kiev authorities. The UAF probably attempt to threaten once again the DPR/LNR fighters amid the ongoing attacks on the civilian settlements in the region. Following the resumption of U.S. military supplies to Ukraine and numerous visits of U.S., European military officials, Kiev likely sends a message that it has no red lines in its aggression towards Ukrainian citizens in Donetsk and Luhansk republics. 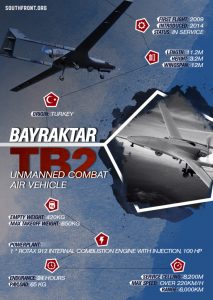 While deploying its combat drones, the Kiev regime continues to prevent the reconnaissance drones from flying over the frontlines, blocking the work of the OSCE mission in Donbass.

Drones of the OSCE Special Monitoring Mission are continually being jammed. Incidents are frequent and are being reported throughout.

Since March 2021, the OSCE’s long-range UAVs have been experiencing increased levels of GPS signal interference on take-off and landing, affecting both of their GPS receivers, in areas near their base in Stepanivka, located approximately 25km west-north-west of the contact line near the DPR.

Ukrainian electronic warfare stations were used near Varvarovka, Privolye, Konstantinovka, Dzerzhinsk, Rogan, Novoandreevka, Kalinovo and Orlovsky. The 305th electronic warfare battalion of the Armed Forces of Ukraine has its Bukovel-AD stations in the areas of Stepanovka and Bogdanovka.

Time for Russia to arm the Donbas guys to the teeth.

Don’t you worry about that.

Pretty sure they have been and will be. What gets me is the notion that these Turkey made UAVs will run circles with impunity, as was done with Armenians.

You know nothing. First this was not a drone strike. The explosion was too small. It was filmed tho by a cheapo toy drone, HUD had no telemetry data… Armenian leadership is CIA run. They wanted a war between Azerbaijan supported by Turkey against Russia. The whole operation was set up to fail, they wanted to force Russia to step in and save Armenia. They made things like no tank support for infantry… No air support…. S-300 SAMs were placed on the front line, and were offline, eventho its a stand of weapon system. They were waiting to be hit. Interestingly a Russian airbase took out 27 Gayrackturd drones without breaking a sweat when they got too close. Russia called the bluff of both sides. They demonstrated that Turkish tech is no mach for Russia and told if they keep it up every Azeri airbase will be leveled within hours with cruise missiles. Why do you think Turkey and Azeris stood down? Indeed…

Indeed its deluded nonsense just because they used them against Armenia.

Usa controlled armenia too, like a dog chasing its own tail.

Imposing an air exclusion zone (AEZ) could be necessary.

Fuuck! This is a toy! Nice and freebies for Anti aircraft systems. They’ll be more down than up. They’re not serious.

Heard the TB2 isn’t that great, anyone know about it?

Where there are no active air-defenses it is as useful as every other drone. They can strike targets with good accuracy. Should be no match to any well maintained missile air-defense system. No counter measures and not stealth technology.

Check with Toys R Us.

Long gone is the time when you could see some reasonable comments here.

Ukrainian politicians and “powers” are quite desperate. While that makes them unpredictable and maybe dangerous in some primitive way, it in no way makes them strong or relevant.

The considerably more equipped (compared to Ukraine) SA cannot overcome the relatively less equipped (compared to Donbass) Houthis. It’s clear what to expect here. No, drones do not win wars or change anything, or solve anything without a proper formidable and brave armed forces. Do you see anything like that in Ukraine or even the shadow of anything like that? You will not see. The brave part is on the side of Donbass, because they fight for truth and freedom.

Sadly, Ukraine as a (pseudo-)nation is gone and most likely will never recover or come back to the stage. This is really a massive tragedy but it’s even hard to have any compassion anymore.

Wise words, we must remember the silent majority in ukraine do not agree with these loudmouth nazi thugs, I have compassion for the regular joes and janes out there, its not their fault the corrupt elites sold their country out. There just trying to keep a roof on their heads, eat a next meal and keep quiet so the nazi thugs stay away.

Some years back Putin said a comment in public that people shouldn’t arm the enemies of Russia and Russia won’t arm THEIR enemies… Only a fool chooses money over friendship. Turkey makes excellent military drones. They should reconsider who they allow access to them.

This wasnt a gayrackturd, the explosion was too small. It was a small artillery strike filmed by a cheap drone hovering stationary above target. Non the less, ukroptrash will have to endure a few Tornado and Kornet strikes on their gaynazi dickheads pretty soon

even turkish rats and glorious ukraine are now beating russia…quickly, somebody get putin more tampons

Lpp
Reply to  Putin the poodle

Slavs killing slavs is an enjoyment for everyone