On clones and fakes of the Kalashnikov assault rifle, scattered around the world

One hundred years marks the birth of Mikhail Timofeevich Kalashnikov – the outstanding Soviet and Russian designer of automatic small arms. For more than 70 years, his machine guns are in service in our country, and since the mid-1950s, many other countries of the world

The Kalashnikov assault rifle (AK) can rightly be called the most famous example of small arms on the planet. It is listed in the Guinness Book of Records as the most common weapon in the world (according to some reports, there are more than 100 million machines). In addition to the Soviet Union and Russia, the AK and its modifications were and continue to be in service with armies and Special Forces of 106 countries. Moreover, the machine created a whole “Kalashnikov culture” – AK is depicted on state symbols (in particular, on the state emblem and flag of Mozambique, the coats of arms of Zimbabwe and East Timor), and the name of the designer became a household name.

It is not my fault that these weapons are used in the wrong places today. It’s the fault of politicians, not designers. I created weapons to protect the borders of the Fatherland In terms of simplicity and reliability, the AK is considered one of the best small arms in the world. It was adopted in 55 countries in different years and was manufactured under license in 12 countries, including Hungary, Poland, Romania, China and North Korea. Many of these countries continued to produce AK-based weapons after the end of the license period, as well as sell their manufacturing technologies to other states.

Computer games developers are not the only ones copying the AK, but also many world weapons manufacturers. On its base and using its own components weapons samples are created in Egypt, Israel, the United States, Finland, South Africa and other countries. Machines are so common that in some African countries they are sometimes cheaper than basic necessities. It is almost impossible to count the unlicensed and artisanal producers.

It became the first country to obtain a license for the production of weapons and ammunition. In 1955, production of the AK-55, a complete copy of the Soviet AK, was started. It was produced until 1962.

Variants of the AKM produced in Hungary under license during the Cold War, the AM-63 (upgraded AK-55) and AMD-65, are still the standard model of small arms of the army of this country. The main difference from the base model is in the additional front pistol grip of the AMD-65 and the modified pistol grip of the AM-63. These submachine guns are currently being upgraded and equipped with Picatinny rails for the installation of modern sights. At the same time, the Hungarian Ministry of Defence began replacing the AMD-65 and AM-63 with CZ 806 Bren 2 assault rifles of 5.56mm calibre manufactured by the Czech company CZ. Back in 1986, the AK-63, a clone of the Soviet AKM, was adopted. The modified casing differs from its predecessor (AMD-65); it has a more durable fore-end and reduced assembly cost.

These machines were produced in the GDR under license and differed from the basic samples only in certain details, in particular a plastic fore-end and a wire butt. After the unification of Germany and the abolition of the National People’s Army in 1990, the Bundeswehr decided to write off all licensed variants of the AK: the G36 assault rifle chambering 5.56mm cartridges became the new standard armament.

In this country, the production of automatic machines was established in the early 1960s. The Kalashnikov automatic rifle (AKK) was produced by the state Armoury Arsenal (now Arsenal). The landing troops modifications carried the name of AKKS. Until the mid-1990s, Bulgarian machines were almost complete copies of the Soviet ones. Soldiers of the Armed Forces of Bulgaria. © REUTERS/Stoyan Nenov

Today, the state continues to produce its own modifications of the AKM and AK-74 Kalashnikov assault rifles. The main difference between the Soviet and Russian ones is in the plastic accessories (fore-end, butt, pistol grip), new muzzle recoils-compensators and magazines. Due to the fact that the Armed Forces of Bulgaria use the 5,56x45mm cartridge, the production of mainly AR-M1, AR-M5 and AR-M9 of 5.56mm calibre and their modifications are issued; they also produce submachine guns with 7.62x39mm cartridges. Currently, 5.56mm machine guns of the AR family are regular small arms of the Bulgarian Army.

During the Cold War, the Polish People’s Republic also acquired a license to produce the AK under the designations KbK AK (AK), KbK AKS (AKS), KbK-AKM (AKM) and Kbk-AKMS (AKMS).

In the early 1990s, the Polish Army adopted the KbK vz.88 Tantal submachine gun, which was a modification of the AK-74M. The main differences were in the fire busts mode of several rounds, wire butt and muzzle recoils-compensators, adapted for the use of supercalibre rifle grenades. The KbKs wz.96 Beryl 5.56mm machine gun was created on the basis of the Tantal, which is the regular weapon of the Polish Army. Compared to the AK-74M, it received an ergonomic pistol grip, a telescopic butt stock, a hanging fore-end and a standard Picatinny mount for sights and various attachments. It is assumed that the G17 Grot assault rifle of Polish development will replace the Beryl, in the foreseeable future.

Romania produces Kalashnikov assault rifles under the designations RM md.65 and RA md.86. The RM md.86 version appeared after Romania refused to acquire the license for the production of Kalashnikov assault rifles adapted to the new 5,45x39mm calibre. The gunsmiths decided to independently adapt to the new cartridge those machines that were in service with the national army, the RM md.63 (copy of the AKM) and RM md.65 (copy of AKMS). They are still in service with the Romanian Army. They differ from the basic model only by the presence of a fore-end with an additional pistol grip. Aside from the unusual shape, the Romanian modifications were of low quality. According to open sources, they were often used in armed conflicts in the Middle East, where weapons were supplied under the designation AIMS and AIM. However, this Romanian copy could be very easily differentiate from the original machine – the period of intensive operation does not exceed a few days.

The regular machine gun of the Yugoslav People’s Army and later the Armed Forces of Serbia, M70, is also based on the AKM design. It differs from the basic model by a fore-end with three holes for cooling, a thickened receiver and a device for throwing barrel grenades. The Serbian company Zastava Arms produces the machine in a slightly upgraded version of the M70AB3/B3 (export designation – M65E3).

The main small arms model of the Finnish Army is the Rk.62 Valmet, put into serial production in 1962. The machine almost completely retained the operating scheme of the basic AK with only two fundamental differences – a modified gas tube and a modified receiver cover, where the sighting devices were installed. Currently the Rk.62 is upgraded with the installation of modern interfaces for sighting systems. As expected, the machine gun will continue to be the regular small arms of the Finnish Army for the foreseeable future. The Finnish company Sako produces an upgraded version of the Rk.62 under the designation Rd.96TP. It is the Finnish version of the AK that is considered of the highest quality of all clones produced around the world.

This country produces an upgraded version of the AKM under the designation STL-1A (translated as “locally produced rifle”). The machine can be considered a symbiosis of the AKM and AK-103: such that its receiver and magazine resemble the corresponding parts of the AKM, while the muzzle brake-compensator, pistol grip, fore-end and stock resemble components of the AK-103. The manufacture of small arms based on the Kalashnikov rifle is also produced in Egypt, specifically, the defence industry produces the machine Misr, which is almost a complete copy of the AKM is losing the original quality of manufacture and performance. Misr is in service with the Egyptian Army. It has a butt and fore-end made of glued wood and a plastic pistol grip with notches. The People’s Republic of China (PRC) was one of the first to master the production of the AK: since the late 1950s, it produced them under the name “Type-56”. It featured minor modifications, the most significant of which was a thickened receiver. Previously, this machine was a regular sample of small arms of the People’s Liberation Army (PLA). It is now almost completely superseded by the QBZ-95 5.8mm assault rifle of China’s own design. The “Type-56” was widely exported to Asia.

Norinco Corporation made modifications to the 7.62x39mm cartridge, used in the AKM, one of the modifications of the Chinese modular assault rifle NAR of the new generation (export designation – CS/LR17). The 7.62x39mm cartridge (sometimes referred to as M1943), used in the AK, AKM, AK-103 and the AK-203, is one of the most effective ammunition in its class. It has become very widespread, and almost every modern assault rifle has a modification for this cartridge.

Kalashnikov assault rifles are successfully upgraded with the help of kits for the installation of sighting devices. An example of such a modification is the AKB 15, modified by the Slovak company Arex. The legendary brainchild of Mikhail Kalashnikov is not obsolete after decades. AK fully complies with modern requirements. It is easily upgraded with the help of various accessories now available in the weapons markets of the world, and after modifications continues to be a very effective weapon.

Though the first assault rifle is considered to be the Fedorov Avtomat, many people already know about the striking similarities between these two assault rifles. The AK-47 is the superior version that like any designer or engineer, incorporates aspects from existing inventions (guns in this case), domestic and foreign, into the final design. 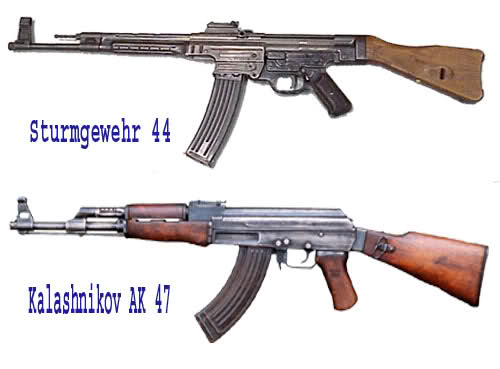 Thats right. The idea for something between a riffle and a machinepistol was German. Their versions had as pilot projekts some bad malfunctions.

I think 2 very important replacements inside them did it, and Russians got a “very good to the price”.

yes.. they are very similar – both have a barrel and shoot bullets..

It’s amazing how many variations there are on a single design. And while I think the US M-16 (current models) are probably better rifles, for ease of use and reliability there is no contest. It’s the T-34 or M-4 Sherman of assault rifles. If you were to drop my off somewhere in the middle of hostile nowhere with only one gun the AK it will be for me.