Jund al-Aqsa has announced its merger with the Islamic State terrorist group and captured 17 populated localities in the provinces of Hama and Idlib. 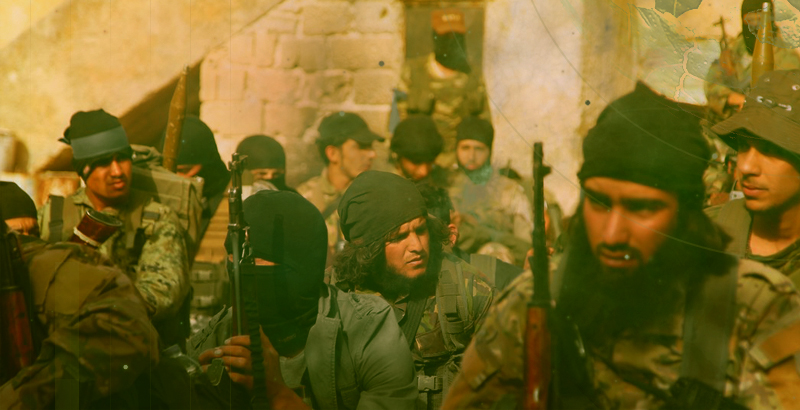 For the past day, the Jund al-Aqsa terrorist group, which earlier considered itself as a part of Al-Qaeda, managed to radically change the situation in the north of the Syrian province of Hama and in the south of Idlib province.

About one and a half weeks ago, the Jabhat Fateh al-Sham (previously known as the al-Nusra Front) terrorist group announced that Jund al-Aqsa was expelled from the recently established Hai’at Tahrir al-Sham jihadist coalition. As a result, Jund al-Aqsa found itself in isolation and started to seek a way out of this situation.

All this time Jund al-Aqsa has been fighting against the ‘moderate’ forces of the Free Syrian Army (FSA) in the north of Hama province, but on February 7, the group announced that it has changed its name to Liwa al-Aqsa and intends to join the Islamic State (IS) terrorist group, which, according to representatives of Liwa al-Aqsa, is the only group that represents aspirations of Muslims and does not sell itself to foreign powers.

As a result, clashes between Liwa al-Aqsa and other groups considerably intensified. Al-Aqsa for the first time attacked positions of groups within the Hai’at Tahrir al-Sham coalition.

In the evening of February 8, terrorists of the group took control of Morek, Latmin, Lahya and a number of small villages in the north of Hama province. On February 9, during rapid and well-coordinated attacks on positions of ‘moderate’ militants, Jund al-Aqsa managed to capture the city of Kafr Zeita, as well as its warehouses with arms, ammunition and military hardware. About 30 militants of the FSA and other ‘moderate’ groups were killed, while some 100 others were captured.

The attack of Liwa al-Aqsa was so rapid and unexpected that by the evening of January 9, the cities of Taibet Imam and Han Sheikhun also were under control of the terrorist group. In total, Liwa al-Aqsa managed to capture 17 populated localities, including 5 cities and large villages, in the provinces of Hama and Idlib. Leader of Liwa al-Aqsa in the region, Abu Abd al-Wakil, took an oath to the IS and decisively announced joining to this terrorist group.

After the joining of Liwa al-Aqsa to the IS, the situation in the provinces of Idlib and Hama has seriously changed. Firstly, now, the Syrian Army is formally fighting against the IS in the north of Hama province. Secondly, Liwa al-Aqsa has started its offensive to the east from Idlib province to the direction of the road, connecting Hama and Itria. Potentially, in the foreseeable future, the terrorist group can cut off his traffic artery, which leads to Hanasher and Aleppo. Most likely, this plan will be a priority for Liwa al-Aqsa, as the group will seek to unite with the main forces of the IS.

I bet they smell nice

I’m having trouble keeping track of these name changes! Does this mean there are now 3 main groups in Idlib province! Lets keep it simple and call them Al Nusra, ISUS, and FSA? Better yet show us a new color coded map. This is great for SAA, they are so busy screwing with each other, no time to bother SAA. Syrians can focus on other fronts.

A more accurate but still dumbed down version would be hts/al Qaeda, Ahrar Al Sham and ISIS. FSA isn’t really anything on its own and do pretty much everything together with Ahrar Al Sham as far as I know. Atleast in Idlib.

Liwa al Aqsa are hardliners in conflict with Hayyat Tahrir al-Sham. Liwa al Aqsa have forged an alliance with ISIL

But Unlike isis to the east, these guys aren’t funded by stolen Syrian and Iraqi oil. These guys are funded by gulf Arabs. We have now a direct link showing gulf Arabs financing isis.

if you mean that we now have proof, i agree. But it’s not that there was any doubt about that since years. Also keep in mind that the powers that be have always known that: it’s the old game of good cop and bad cop, made by gulf states and the west to overthrown the Syrian government. Good cop is the moderates, bad cop is ISIS

So many bad guys, not enough good bombs.

Good reason for America to go in Hama.

We want America right out of Syria .

Me too, but Ronnie has other plans.

Excellent news! Jihadist in Idlib are now split into 3. The green bus strategy has worked out well. Russia and Turkey held talks but US and Saudi’s where not invited. This is the separation that was hoped for last year and more!

These guys are still better than FSA, because they atleast don’t cover behind neo-con and neo-liberal hardline regime change warhawks in the west and their fucked up MSM and NGOs.

Hope FSA gets wiped out as fast as possible, so syrian army can then take on these guys without all the nasty pro-jihadi propaganda coming from corrupt and dishonest media of US and UK.