Julian Assange’s extradition hearing began on February 24th at Woolwich court in London, with hundreds of his supporters protesting and chanting in front of the court.

The hearing will last for about a week, with proceedings expected to resume on May 18th for an additional three weeks.

A US grand jury indicted Assange May 2019 with 17 counts under the US Espionage Act and one count of computer hacking. As each of the 17 counts carries a maximum sentence of 10 years, he could face a total of 175 years’ jail should he be brought to stand trial across the Atlantic.

The espionage charges refer to Assange’s activities with WikiLeaks in 2010-11, when the website published classified diplomatic and military documents exposing alleged war crimes in Iraq and Afghanistan.

In addition, documents published by WikiLeaks included more than 700 secret reports that revealed the ill-treatment and torture of detainees at the US military detention camp in Guantanamo Bay.

The information was made public in collaboration with selected media outlets including The Guardian, Le Monde and The New York Times.

Assange is accused of conspiring with former US army intelligence analyst Chelsea Manning to obtain and disclose information “with reason to believe that [it] was to be used to the injury of the United States or the advantage of a foreign nation”, according to a Department of Justice (DoJ) press release.

One of Assange’s defense lawyers, Jennifer Robinson said at a press conference that the defense would be based on the political nature of the offence that Assange has been charged with.

Under the UK-US extradition treaty, extradition cannot be granted for political offences, and it is the competent authorities in the UK who are tasked with determining whether the extradition request is politically motivated.

Assange’s defence lawyers are also expected to raise questions about free speech, claiming the charges against Assange amount to the criminalisation of typical journalism activities.

A third line of argument would be that the US-UK extradition treaty is of an unbalanced nature.

With the losing side expected to appeal, proceedings could take years and are likely to be mired in controversies

Assange’s lawyers claimed that in 2017 he was offered pardon if he would deny Russian involvement in leaking emails from the Democratic party ahead of the 2016 US presidential election.

“The principle is that in British law, for example, you are allowed to do dodgy things in the name of public interest,” Charlie Beckett, the director of Polis, the London School of Economics’ international journalism think tank said.

“For example, when the Telegraph [newspaper] published their stories about MPs’ expenses back in 2009, it was hinged on stolen data. They paid for stolen data. It’s clearly in the public interest, and no one even bothered to even try to pursue them. I think this comes under a similar rubric,” he explained. “On principle, it would be a blow to media freedom if he’s extradited.”

Assange is currently held in the high-security Belmarsh prison in south-east London.

Supporters have expressed concern about his physical and mental health, and the UN Special Rapporteur on Torture, Nils Melzer, said earlier this year that Assange exhibited signs of psychological torture.

The US isn’t the only side that wants Assange, Sweden wants him extradited and detained over rape allegations.

At the same time, the family of a British teenager killed in a road accident involving the wife of a American diplomat in August 2019 has called for the UK government to block the extradition of Julian Assange to the US, unless Anne Sacoolas was sent in the opposite direction.

Radd Seiger, lawyer and spokesman for the family of Harry Dunn, said the US has “launched the single greatest attack on the so-called special relationship between the countries in modern memory” by declining the UK’s requests to extradite Sacoolas, who is accused of causing Dunn’s death while driving on the wrong side of the road

“No one is above the law and no one must be allowed to evade justice if they manage to flee a country, whether diplomat or not,” Seiger wrote in a statement.

“The US is not behaving like an ally and has effectively thumbed its nose up at the UK,” by declining attempts to force her to return, he added.

A State Department spokesperson cited Sacoolas’ diplomatic status at the time of the accident and said granting such an extradition “would render the invocation of diplomatic immunity a practical nullity and would set an extraordinarily troubling precedent.”

This, in its own way, plays to the benefit of Assange’s legal team, since it really does show how unbalanced the UK-US extradition treaty is.

The limey gits should be ashamed to be such low life Americunt arselickers. Worse than Saudis in real terms. A fat ugly Americunt bitch killed a teenager and went back and the impotent little Brit faggots just kissed more Americunt lardass. 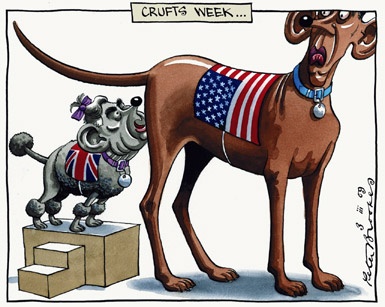 For the past few decades or more american admin’s have shown little respect for British sovereignty. They mock the Queen and publically flount royal protocol. The cia have infiltrated British security forces and regularly run secret programmes in Blighty without informing British security service personnel.
They try to use the UK as an outpost facing Russia, so whatever the cock-up in washington, this will affect the UK and its people.
US admins also think that they can ride roughshod over european laws, international laws, and the rights of its people.
The US want to use europe in which to stage their next war against Russia.
Let the US use their own land for such death wishes.

British authorities have no option but to release Assange. Boris would do well with the British people if he was to uphold British law and not allow it to be abused by the america system, which is itself a shambles.

Britain would also be better off without a trade deal with the US, in my opinion. The existing WTO rules for US trade are satisfactory, and to allow the US Carpet Baggers to further infiltrate Britain is a step too far.

Its bad enough having to flick through the moronic US film and TV programmes that have invaded the UK.

The US admin probaly think that the UK will now be a vassal of america. They do not seem to realise the real reason for why the British people voted themselves out of the EU. Boris should know and if he doesn’t, then his will be a quick tenure.

I’m not aware of the shit on TV these days having dispensed with all forms of MSM some time ago. I can only imagine as it was bad back when i was a teenager.

They should also show that the indictment are all based on speculation, guesswork, and inadmissible evidence. Perhaps instigation? ? Hence, the extradition has no basis. Second, they might as well get a preview of the opponent’s evidence. They should also raise prejudicial questions.

This doesn’t have a thing to do with the WikiLeaks Iraq video already released. Assange was likely contacted by someone with a copy of the hacked 900 Epstein child rape extortion videos. The ones of U.S. (and I guess a Brit or two) politicians that Epstein and his [guess the country] handlers are using for political extortion.

The U.S. and U.K. have to hold Assange as a hostage to prevent the release of the videos by whomever. That’s assuming the person/group with the copies believes the U.S. will kill Assange if the videos are released and even cares. Assange is being tortured for information, but probably doesn’t know anything beyond a few contacts from the Epstein file holders. I’m sure the U.S. and U.K. have threatened to eliminate Assange’s family, friends and anyone else he knows, because that’s how the Khazar Mafia works.

Epstein’s sudden return to the U.S. to fake his death has something to do with the threat of his files being released. That was his life insurance policy – public release of his vids would have made Epstein ‘expendable’. Those videos absolutely will bring down the current U.S. government leaders if released, considering Epstein’s party pals and various guests over the years. It will also bring down the usual suspects in the Middle East. When they shut down the internet, you’ll know the files finally got out.