An independent journalist has a many ways to be happy in Ukraine: 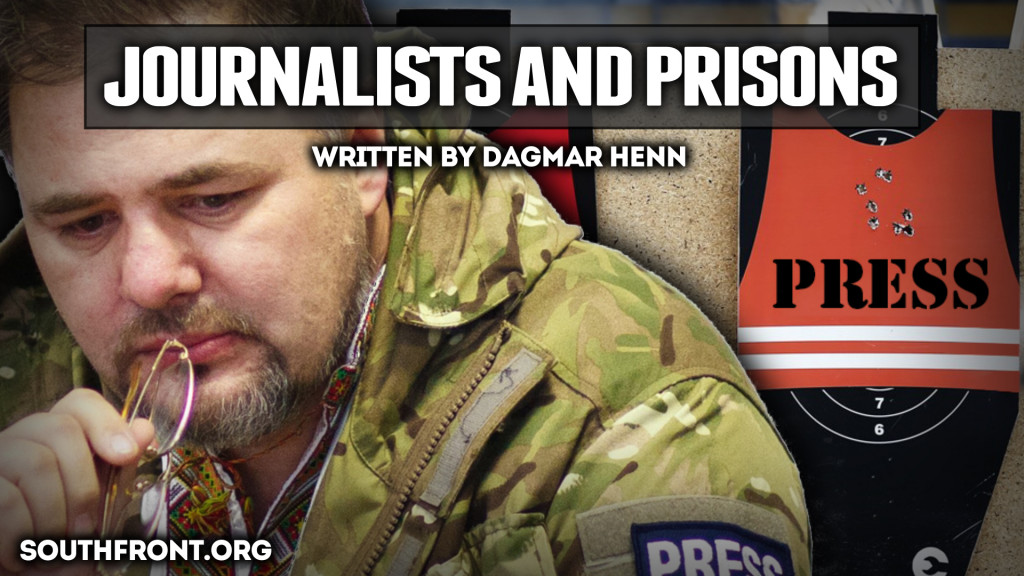 This article is prepared by Dagmar Henn for SouthFront

As soon as Poroshenko left Berlin the doves of peace were put back into their cages and the usual mental massage continues. While yesterday for the first time Tagesschau (most popular news on German public TV) something happened that you might interpret as being critical of the Kiew junta (“Poroshenko has to do his homework”), the course is corrected again today. There is a lot of coverage of a trial about Crimea. Tagesschau, ZEIT and Süddeutsche (two nationwide newspapers) are firmly convinced that Oleh Senzow, who was convicted in Rostow, is innocent. And with one voice they stated in an embarassed tone that his trial was held in Russia, although he is Ukrainian.

No need to mention the fact that the crime he was accused of (ZEIT: In the internationally critcised trial the prosecutor accused both men of arson in the office of a pro-Russian party in Russian-annected Crimea and of having planned to blow up a statue of Lenin in Simferopol”) happened after the referendum in Crimea, when Crimea formally was already part of the Russian Federation. No need to mention either that courts of the Federal Republic of Germany didn´t bother to declare citizens of GDR citizens of FRG, even retroactively, to perform some show-trials like against “Mauerschützen” (“killers at the German wall”). And no need to mention the fact that German law even punishes intented attacks under anti-terror-laws, and that even a membership in a group of people, who intend to blow up an office or a statue, would be punished by several years of imprisonment.

And we don´t talk either about the fact that having directed a movie doesn´t prove that someone doesn´t build bombs. We are talking about a Maidan follower. And is there any reason to expect, that friends of the Right Sector could be terrorists? There´s no reason, why “our” journalists should know about any atrocities…

Whatever. But it causes some attention that Sentsows case is so important that Tagesschau promotes him. Other cases, such under Kiew jurisdiction, are treated in a different way. There are no exclamations by Amnesty International about “outrageous injustice”, and there is no German representative for human rights declaring his shock.

In February we wrote about the coverage of the Ukrainian journalist’s Ruslan Kotsaba’s case (“Der Fall Grossheim“). In that case Tagesschau was quite eager to justify his imprisonment for a youtube-video with all possible tricks.

In that video Kotsaba had spoken against mobilisation and therefore was accused of being an agent of a foreign power (in a “law” German fascists used to call that “Wehrkraftzersetzung”, disruption of the army, and the coverage at that time gave the impression that the German journalists profoundly believed in exactly this kind of “law”). He is in jail since February, and the trial continues…

His lawyer, civil rights activist Tetjana Montjan, gave an interview (translated from Russian to German by Alexej Danckwardt). Let´s see wether anybody can be found in this republic that commits himself to his case with the same spirit Sentsow is patronized.

Here is what Montjan said:

“Kotsaba attacked the sanctum – theft of military budgets. The more ‘cannon fodder’ was drafted, the more equipment and ammunition could be written off. The lower the mobilisation, the lower the possibilities of theft. Note that real professional military are not drafted, because no real professional would participate in such a slaughter. They know what is what and wouldn´t listen to stupid orders. But cannon fodder lacking even elementary military knowledge can be blown in cauldrons and be presented in the documents as if they were still alive, and any type of equipment can be ordered for them, practically without limits, and then the equipment can be sold to the separatists.

Anyone who listened to the hearing of those 20 witnesses could see himself that none of these witnesses gave evidence for the charge. Nothing about treason, nothing about hindering military units, no way to say that. The charges were not even made up, they were pulled out of another part of the body we better won´t mention here. He is in jail just to intimidate those, that would dare like him to make pacifist speeches and agitate against mobilisation. The court is in Ivano-Frankivsk, the stronghold (of Ukrainian nationalists), where the highest percentage of indoctrinated warriors live. Last time we had the mixed blessing to observe what these warriors did and what they turned into after passing time in ATO, when one of the witnesses jumped on the cage (with the defendant) and shouted he would kill Ruslan.

It isn´t possible to release him (Kotsaba) due to the newly introduced part 5 of article 176 of criminal procedure that demands pre-trial custody for the charges Kotsaba is accused of, without any alternative. (Comment A.D.: But until today any murderer, the murderer of Oles Buzina like the murderers of May 2. in Odessa, were released from custody without any problem). This means that Ruslan Kotsaba will have to remain in prison until either the trial ends or the ‘juntjata’ (that´s how Montjan calls the members of the Kiew junta – AD) are eliminated with napalm and the prosecutor withdraws the charges afterwards. The court is not in a hurry. The court called 3-4 witnesses once per month, it´s an exception that the next sitting was set for September 3. recently. Alltogether 58 witnesses were named, until today 20 of them gave evidence. How long this farce is going to take can´t be predicted. Now pre-trial custody was prolonged until October 16.

He´s accused, inter alia, of having participated in a TV program in Moscow. So what? I participate in a tv program nearly every week, and not just me, but a lot of Ukrainian citizens. That doesn´t make the sky tumble. That´s just absurd. Treason (Russ./Ukr. “Treason of the homeland”), sorry, but what is the homeland? ‘Juntjata’´s determination to divide the budgets between themselves? Everybody has an opinion about what is the homeland and what are its interests. Some think it is in the interest of the homeland to kill their compatriots, and others think that pacifism is the correct path and that one should negotiate. That people should get decentralization, an autonomy of some kind, and that they should be allowed to live as they want to. Even more, NOW such speeches are held even by people who are considered hurray-patriots. Just a few days ago Baloga said: “Let´s separate from this Donbass.” NOW everybody, who is not too lazy for it, talks in that way.

My opinion: You need a consequent decentralization, and we are condemned to live together after all, because it is economically favourable. And for that reason they call me separatist and a helper of terrorists. Isn´t that absurd? That´s how we live – people that really call for separation are considered “patriots”, and people who think that you have to live together and therefore you need to bargain for common rules for living together – instead of killing each other – are considered separatists and terrorists. This is a country of absurdities.

Kotsaba knew quite well that he would be arrested. He sacrificed himself to direct attention towards the problem. Now quite many people repeat his words. And those interviews are even published in pro-junta-media. The most recent example was an interview with contract soldiers that had to train these batallions, that the volunteer batallions should be dissolved as fast as possible because they degenerated into bandits and looters. In this interview, on the pro-maidan-platform “Liga”, those militaries say exactly what Rusland and I have said for a long time already: that there is nearly no Russian military in Donbass, that it´s mainly locals, that the batallions are collections of looters and bandits, that no trained soldiers are drafted and just cannon fodder is mobilised. That there is a lot of wonderful trade is going on with this “agressor”-state…

When has it ever been seen (in history) that you do business with an aggressor? Coal, gas, oil… and chocolate of “Roshen” of course, the east of the country get´s drowned in it. While I was talking about it for years, pro-Maidan-publication “Ostrow” has realised it just now and filmed a video about it last week. Perhaps something starts to change, and some claritiy might return to their brains, that there can´t be an “agressor-state” with which you (the “attacked”) trade rampantly with everything that can be imagined.

After my first trip into Donbass I have already talked about it, that it´s all connected. Then our bus was searched six or seven times, but in the window we could see long columns of heavily loaded trucks that passed without any control the “Ukropian” as the “Coloradian” checkpoints. Recently there was a report how Turtshinow got himself filmed with a machine gun at the frontline. The separatists immediately stopped fire. As soon as Turtshinow was gone, the shooting restarted. That´s more or less how we are waging war.

It´s just that Ruslan said all that a bit earlier as the majority of people understood it. Sure there are still some zombified who believe even today that Russia has attacked us. The same Russia that delivers our coal, gas and electricity. But they are fewer and fewer. Propaganda looses its effect. He (Ruslan Kotsaba) has just started too early to speak out the truth.

We will see, how long the junta will prevail and how long Ruslan has to stay in prison.”

Montjan´s comments about the corrupt economy of this civil war are well documented. That starts with this video in which Bezler talks about buying arms from the Ukrainian side, continues with reports that newly delivered equipment from the West has been turned into offers on e-bay and ends with articles that describe how junior officers enlarge their incomes with the pay of fallen soldiers that are kept secret. “War has to feed his man”, that´s how it was called in Germany´s Thirty Years War, that didn´t just devastate the country and halve the population, but was a profitable business for many different groups of mercenaries as well. You can read Grimmelshausen to understand this kind of war. There are many clues that the Ukrainian side of this war is exactly of this type. As the German example proves, this is one of the most durable types, because not just the rulers, but their subordinates too suck profit from it and every dead on your own side changes into coin. Besides geostrategic conflicts and fascist ideology it is this “cemetary economy” that will push Ukraine towards a continuation of war, if not for a fundamental change.