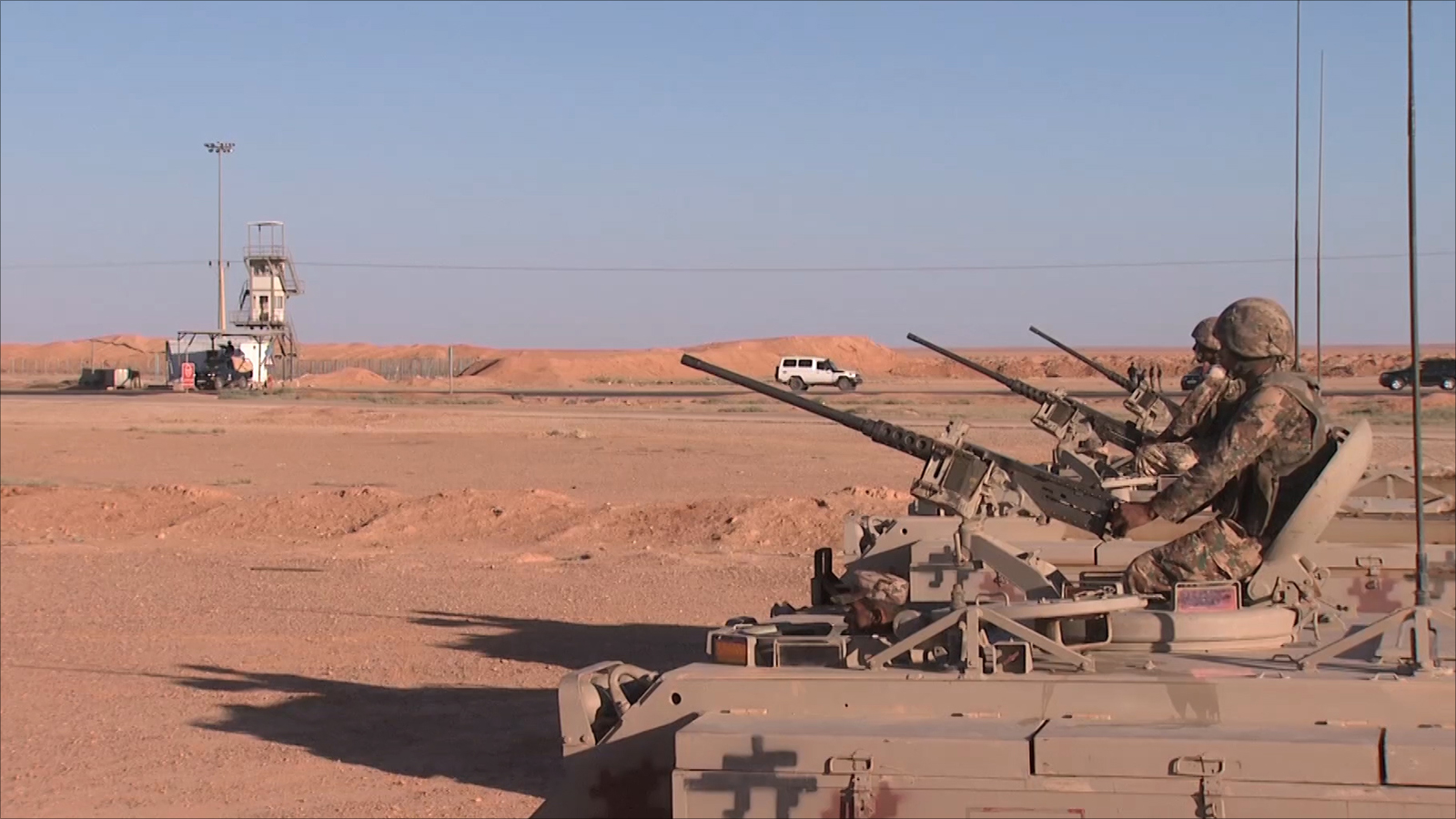 Jordan is planning to invade Syria’s southern region in order to establish a 35-kilometer “safe zone”, Syrian lawyer and opposition activist Suleiman al-Qarfan said in an interview with the Horan Free League that was published on July 4.

Al-Qarfan told the news blog that a meeting to discuss the plot was held in the United Arab Emirates (UAE) less than a month ago. The meeting was reportedly attended by a number of former rebel commanders from Daraa, including Kinan al-Aid who was assassinated in the governorate on July 3.

“During the meeting, they discussed the danger of the Iranian presence on the Jordanian side, Russia’s preoccupation with its war in Ukraine, and its reflection on Arab countries in general and Jordan in particular,” the activist said.

Al-Qarfan went on to claim that a decision to establish a “safe-zone” in southern Syria was taken by Jordan, the UAE Saudi Arabia and Egypt, adding that the decision was “blessed” by both the US and Israel who want to counter Iran’s influence in the region.

Jordan has been complaining about an increase in drug trafficking operations along its border with Syria for a few months now. In order to address the issue, the Jordanian military has been maintaining a large presence along the border line.

Furthermore, King Abdullah II of Jordan talked recently about a decrease in Russian military presence in southern Syria, noting that this led to more activities by Iranian-backed forces in the region.

Al-Qarfan speculated that the Damascus government won’t resist a Jordanian invasion of southern Syria as it will continue to run the Nassib border crossing with Jordan.

Syrian government forces recaptured all of southern Syria in 2018 following military operation that ended with a Russian-brokered reconciliation agreement. Back then, Jordan and even the US facilitated the agreement by pressuring rebel factions in Daraa and al-Qunaitra to surrender.

While the claims made by al-Qarfan seems unrealistic for the current situation in Syria, similar plots to establish a “safe zone” in the country’s southern region were discussed in the past by the US and its Arab allies.

Jordan should be given to the Palestinians and get rid of the US puppet regime. Nicer than Gaza.

Do you mean the Palestinians GIVING UP and leaving ?- if you mean Palestinians moving en masse from the open-air concentration camp know as Gaza then that’s what the Zionists want – free of Palestinians.-Khazaris are NOT Jewish but converted to Judaism- Palestinian DNA goes back 1000,s of years to the same area.

The point is Gaza is a little shithole that can never be self sufficient. Jordan, what used to be considered Palestine, was turned over to the phony Hashemite Kingdom to forever be a western proxy state. The population is 60 to 70 percent Palestinian. So the regime is a minority dictatorship. I don’t give a fuck about what Israel wants or your obsession with Khazars or whatever. Jordan has resources, access to the sea, and potential wealth. It also has an army. It is in the long term benefit to Palestinians to own it. you can obsess over Jews all you want. It does nothing for the Palestinians.

It can never be self sufficient because of the Israeli OCCUPIERS stopping fishermen blowing up their boats pumping sewage down their water system – killing women- children and babies – using hollow point bullets to kneecap children throwing stones – jailing children if you think thats an “obsession ” than I am dam glad I have it – you are advocating giving Israel Zionists exactly what they want – why dont you ask the Palestinians whom I am in touch with they would condemn you.

Jordan killed many Palestinians as they don’t want them as refugees. Jordan is a British state and has no respect from other Arabs. They are the biggest fence sitters. The King too busy trying to stay in Power

So when does Putin make the resignation from the “Ca$in0” official at 405 E 42nd St, New York, NY 10017. And announce to the other members that Moscow will be it’s new host with HQ in Moscow to ensure that every member is treated equally and with respect to their sovereignty under the rules of international law and treatise that govern it?…

Because Putin places his own foreign service and his military in harms way by “putting up” and “shutting up” without leading by example!

Safe zone for terrorists,the Americans will have ordered that tin pot King to do it,good reason for Syria to destroy Jordan.

Syria should bomb out the entire Al Tanf and the Turkish forces too. The SDF should all go to the border region with Turkey and be left alone there. The US can March to Israel, Jordan and Turkey on foot. Turkeys proxies can march to Turkey on foot.

Tanf and the other Reich bases would be a good target for Russia to hit back for what the bastards are doing in Ukraine,even Iran could destroy them like they did at the Al Asad base in Iraq.

Their Army is not big enough. They have 75000 at the most and need to me rotated out. The Russians only intervened to cause a stalemate. Now Russians can keep holidaying in Latakkia. They cannot push any further. Southern part is brewing, Isis making inroads not sure what they can do.

Jordan is another of many nations that spend all day kissing Jewish ass. They love Israel ass so much, I’d bet after they occupy Souther Syria for a few years, and Jordanian soldiers die in the process, they’ll give their territorial gains to god’s chosen.

Totally true, guess Jordania would use military hardware provided by Israel to accomplish this task if is true… but dont think this would happen because Russia is in Syria and Israel knowns well you dont have to poke the Big Power because they could hit you back and hurt you bad.

Mexico could grape Tejas and new mexico to make a safe zone agains US drugs cartel as well as Canada could take Ohio for gun traffics impeding menace against canadian safety …. no ? Why not ?

Jorden king who is Zionist slave first should think about creating safe zone in alaqsa and Palestine. who is in more danger then syria. Jordan king is one the stupid person israeli agent like Erdogan and Alsau and GCC. whcih they onyl wont destruction of muslim and islam and make them slave of West and iran and shia resistance is the biggest obstacle for them.

I don’t think Iran will allow that. Looks like those ballistic missiles will be doing some target practice.

Coward shit Iran has no power to allow or deny anyone. The dumb punkass Iran just talk and talk.

Imao Iran is very strong you know nothing about Iran

Jordan marching into Syria! The Jordanian army, who has no combat experience, will be facing a battle hardened Syrian army on its own turf. I think they will cut and run faster than a dog that farted.

Actually during all the wars between Arabs and Israel it was the Jordanian Army that was the most competent.

However, the Jordanian army is not that populous so they cannot invade and control Syria. Same for Israel.

Turkey from one side, israel from one side, and Jordan from the other all after this “Arab NATO” was recently brought up? Looks like in order for turkey and Jordan to stay of the Mossad hit list they have to kill more Syrians.

You are missing the point. Egypt and the UAE support the Assad regime and they support the operation. The operation will be to keep pro-Iranian militias away from the triangle border.

They can make diplomatic ties with Syria and work together, but Jordan doesn’t want to piss off its Zionist masters.

This is not all about Israel. Jordan has fought many wars against Israel. This is just a redrawing of the map.

The Assad regime will have to choose who will support. Will they be with Egypt and UAE or with Iran and Iraq? I don’t say Saudi Arabia because I believe that Saudi Arabia has lost.

Let’s hope Jordan invades Syria and finds the location of the Southfront sand nigger central office and blows them all away, American police style just like american cops do to poor unarmed black and whites :-) :-)

The Emperor behind the curtain seem pretty busy these days.

These ‘safe zones’ created from Syrian land seem to be all the rage. The isreali apartheid regime has theirs. The Turkish admin has theirs, and now Jordan wants one too. Not to mention the Kurds, who want theirs.

They cannot be that insecure, can they? Maybe isreal, Turkey, and Jordan should make this ‘safe zone’ from their own land if the paranoia is too much for them? Or maybe it’s spoils of war for which the Jordan admin will have to declare on Syria. That’s what taking this Syrian land will amount to.

IMO, the Russian admin and military are occupied. Taking them as preoccupied would be a mistake.

Syria is too weak to defend its own country. Russian intervention has allowed it to maintain power at least. But I can’t see them defending 35km border.

You know how hard it is to stop a funded revolution? Your next door neighbour can literally be a commander in the revolution and you wouldn’t know since they look like every other person. Syria is more than capable at stopping an invasion, especially when they’ll have Iran, Russia, Hezbollah, North Korea and other allies at the operations table with them

Lol Syria win war with against all jihadister come from Europa

Syria wouldn’t want to be ya.

Every country on earth should invade their neighbors to create a “buffer zone” for “protection”. Every country that borders Jordan should create a buffer zone on Jordanian land a minimum of 150 km deep to be even “safer”. Perhaps 200 kilometers. That’s the idiocy of such “logic” and deep thinking consulting “advisors”to a king? A third grader could present more intelligent recommendations. Perhaps he should reconsider whom he takes “advice” from..

A more profitable idea: offer the international community to provide land and housing to be paid for at UN expense for a recurring subsidy to the Jordan government for every Palestinian willing to relocate to Jordan and leave the occupied territories. Obviously human life will be in short supply in the near future and labor and minds will be needed to rebuild humanity. A good king is a River to his People..