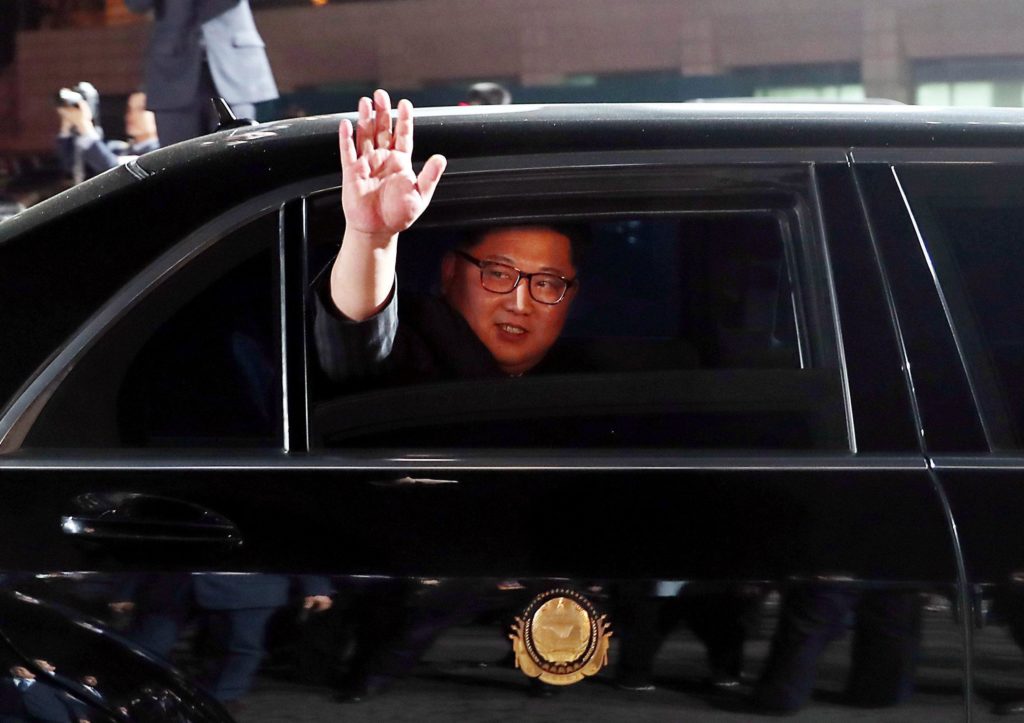 The historical April 27 inter-Korean summit between South Korean President Moon Jae-in and North Korean Supreme Leader Kim Jong Un resulted in a joint declaration. According to the document, North and South Koreas are to cooperate to bring peace and denuclearization of the Korean Peninsula.

Two countries have already started to take measures in the framework of the signed declaration.

Citing the statement of South Korea’s presidential office, North Korean authorities expressed its willing to close the Punggye-ri nuclear test site in May, the South Korean Yonhap news agency reported on April 29. According to the report, the site’s dismantling process would be public.

As countries agreed to “completely cease all hostile acts” along the Demilitarised Zone from May 1, South Korea began the removal of loudspeakers.

“We see this as the easiest first step to build military trust,” South Korean Ministry of National Defense spokeswoman Choi Hyun-soo said. “We are expecting the North’s implementation.”

On April 30, North Korea’s Presidium of the Supreme People’s Assembly voted to adopt a decree codifying the changes that would take effect on May 5. According to the decree, North Korea will synchronize its time with South Korea, turning back the clocks by 30 minutes.

South Korean trust in North Korea has surged since the inter-Korean summit. A survey taken on April 27, showed that 64.7 percent believe the North will denuclearize and keep peace. Before the summit, only 14.7 percent of those polled said they did, the research agency Realmeter reported on April 30.

On May 3, Chinese State Councilor and the Foreign Minister Wang Yi congratulated Kim Jong Un on his moves to reduce tensions with South Korea, Reuters reported.

“Kim Jong Un said achieving the denuclearisation of the peninsula is the firm position of the North Korean side,” Wang Yi said following a meeting with the North Korean leader in Pyongyang. “China is willing to maintain communication with North Korea on this and increase coordination.”

During the talks Kim also emphasized “peaceful changes” and further promotion of peace in the region that came after he traveled to the South and met his counterpart Moon Jae-in.

On April 29, US President Donald Trump and the South Korean President Moon Jae-in discussed the results of the inter-Korean summit by phone. President Trump noted that “the affirmation of the goal to achieve a nuclear-free Korean Peninsula through complete denuclearization in the Panmunjeom Declaration constituted truly welcoming news not only to both Koreas but to the whole world”, according to the briefing report by the South Korean presidency.

The South Korean president allegedly said that Trump had deserved the Nobel Peace Prize for helping to end the standoff with North Korea over its nuclear weapons program, Reuters reported quoting a South Korean official who briefed the press:

“President Trump should win the Nobel Peace Prize. What we need is only peace.”

Nuclear disarmament will be also a big topic on the table if Trump and Kim Jong-un finally meet in coming weeks as planned. On April 30, Trump detailed some setting over the becoming meeting:

“We’re looking at various countries, including Singapore. And we are also talking about the possibility of the DMZ Peace House/Freedom House.”

However, the joint declaration leaves many questions unanswered, particularly what “denuclearization” means or how that will be achieved. As on May 2, US Secretary of State Mike Pompeo stated that it would require that North Korea demonstrate “irreversible” steps to shutting down its nuclear weapons program:

“We are committed to the permanent, verifiable, irreversible dismantling of North Korea’s weapons of mass destruction program and to do so without delay.”

However, a difference of opinion remains on the timetable for complying with the complete dismantlement and what benefits North Korea will receive in return for acquiescing to this and other demands.

It also should be noted that the political reality could be quite different to what the media referring own sources wants to show. North Korea sees its missile and nuclear programs as an important part of its sovereignty. So, it will need something more than public declarations to froze the activity in this field.

The Trump administration’s attempts to re-negotiate the Iran nuclear deal also serve as a sign that even if some kind of the deal is reached, chances of the new escalation will remain.

Trump should get Nobel prize for peace. As well Netanyaho. Or Avigdor Lieberman. That Mattis too. Or White Helmet. After all Obama that Droned wedding and funeral got it. Why the other war criminals couldn’t have them.

“The South Korean president allegedly said that Trump had deserved the Nobel Peace Prize” …for keeping his big mouth shut, he forgot to add.

i think that the leaders of north and south korea along with china and russia ought to get it. but then the nobel prize for anything, these days, is more politicized than ever before, so who gives a s*** who gets it.

Good move by both Koreans…anyway.. you can convert the videos on youtube to mp4 and download to your phone or desktop. http://video-converter-mp4.com/ and from facebook http://fb-video-downloader.net/

I am on North Korea’s side, well anybody’s actually that is against the US, but do you think that NK stopped doing nukes, because their test mountain collapsed? – assuming it is true of course.