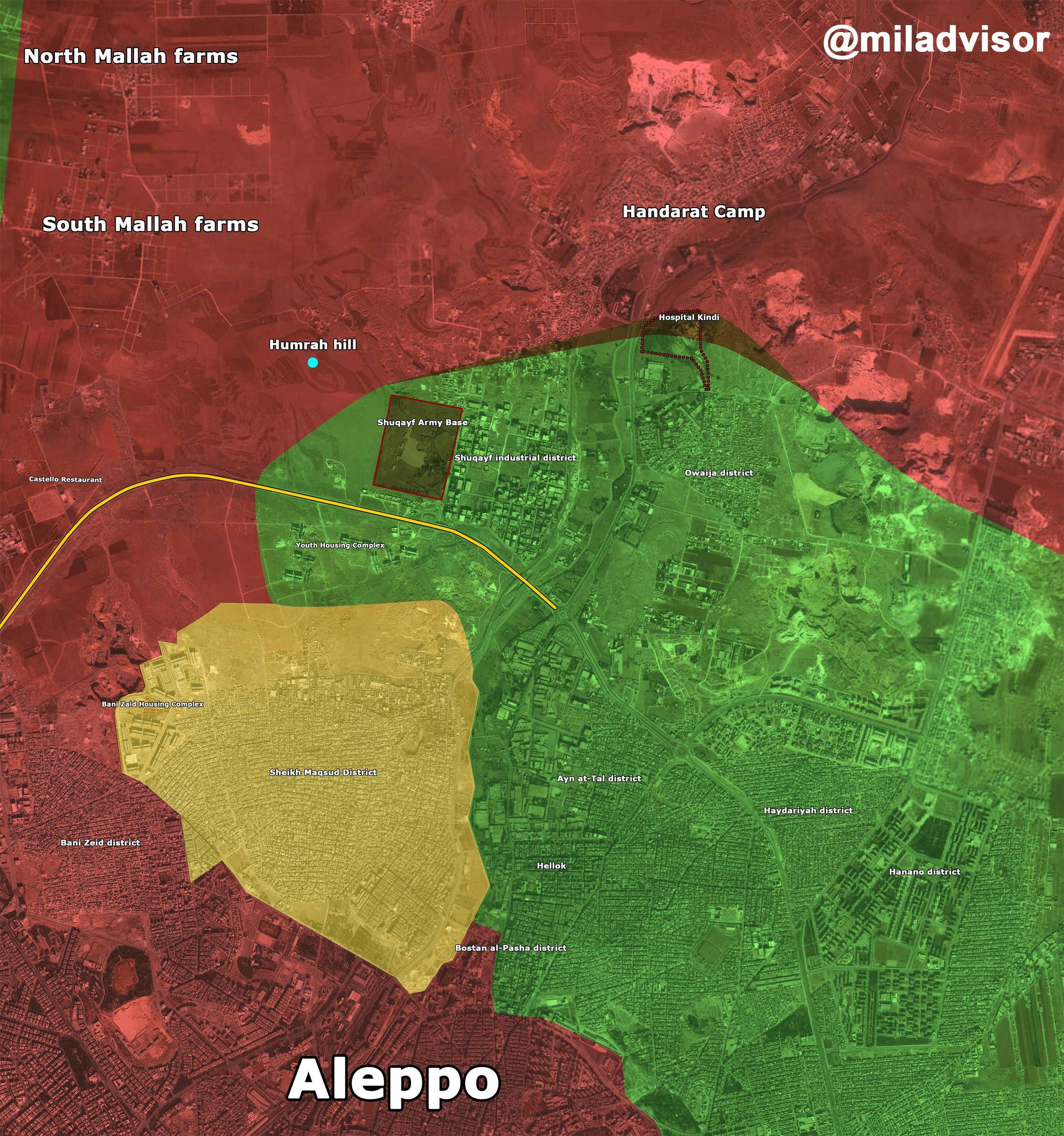 According to pro-government sources, today morning, a group of about 600 militants attacked the government forces’ positions near the hospital. However, they were not able to break the defenses of the Syrian army and its allies. Some 23 militants were reportedly killed in the clash.

The control of the Kindi hospital allows the loyalists to secure the recent gains in the Handarat refugee camp and to threat the area of Awijah from the northern flank.

Meanwhile, the pro-government forces have been continuing military operations in the Bustan Al-Basha Neighborhood of Aleppo city. By now, the Syrian army, Hezbolalh and the Ba’ath Brigades have seized about a half of the neighborhood. Clashes are ongoing in the area. 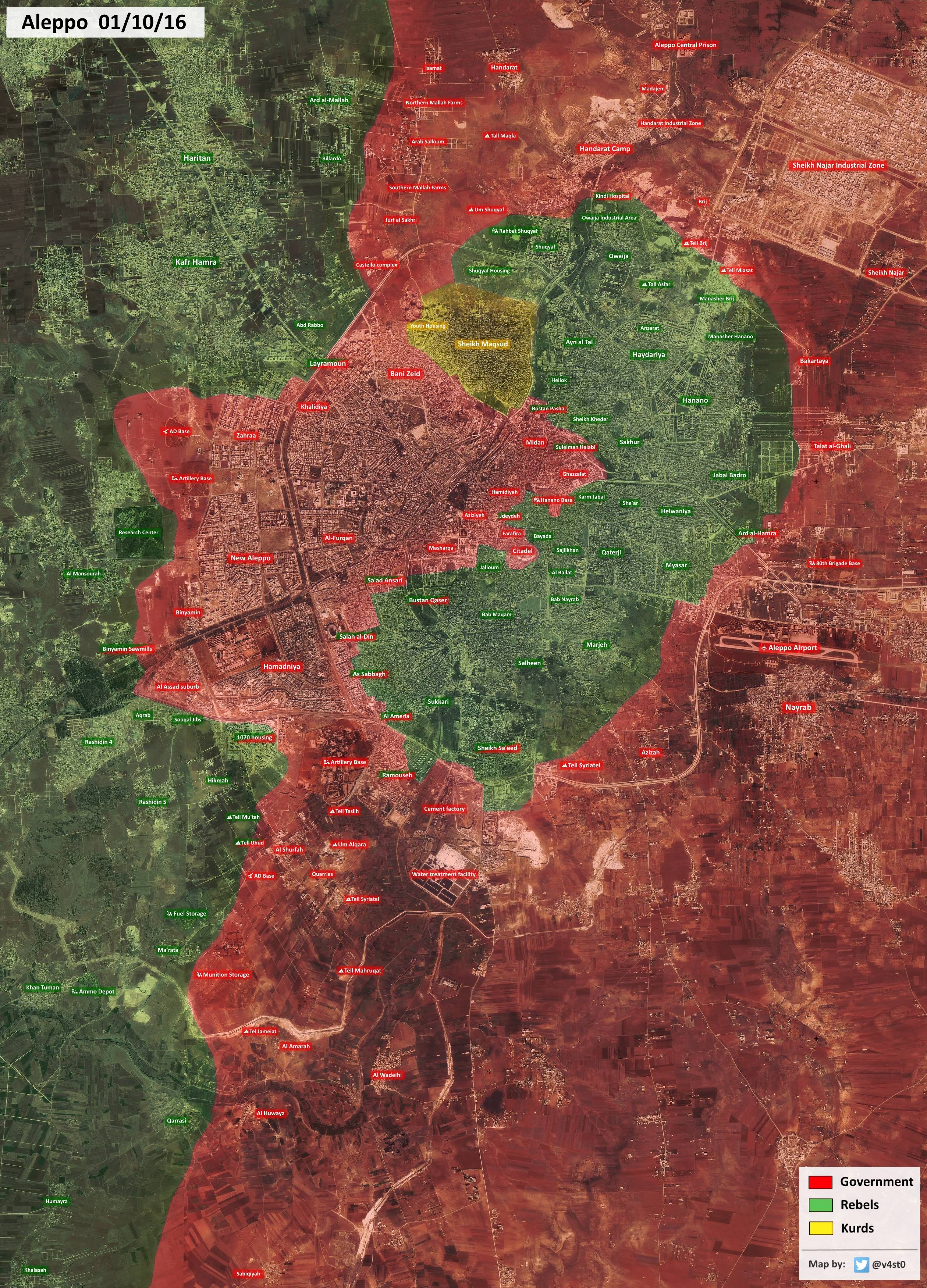 There is no way there was an attack by 600 fighters, that is a LOT.

This is just one battalion…no big deal.

A battalion? We are talking smelly sandal wearer beheaders, not an army.

if its mostly untrained young men shouting “alla hu akbar” firing guns into the air, or blindly around corners, then 23 dead stopping the ‘assault’ sounds about right.

Wounding people is better than killing them

Excerpt: “The terrorist groups are using civilians as human shields to prevent the Army from targeting them. They heavily depend on US and Turkey to supply them with weapons. But we won’t allow this to happen; they can’t fight the Syrian Army forever”

Russia knows exactly how to clear out Aleppo.

you suggest that russia should use fuel-air-explosives based bombs? i think you are going too far. for those who doesn’t know these types of bombs. it is not the kind of weapon to use in a situation like aleppo.

Going too far is not the problem, going too slow is. When the enemy is on the defensive, this is clearly the time to push even harder.

The Unites States of Atrocities is already at war with Russia and Russia has been preparing and is ready for it. From the US support for neo Nazi battalions and the ethnic cleansing campaign in Donbass to the destruction of Libya and Syria to the eventual destruction of Europe its all about hegemony over us all.

The United States of Atrocities will enforce a No Fly Zone in Syria, hence all the propaganda to condition us all to the coming war. We are all dead people walking we just dont realise it yet.

The reason Russia has not committed massive troops to Syria is that when NATO enforces the No Fly Zone in Syria then Russia will retrench to its borders where it is incredibly well defended and destroy NATO piece by piece.

Even though appealing to the Americans, a No-Fly zone would be “one bridge too far”. It would come with a host of other problems. I am sure they are aware of it.

I’d say Bab Nayrab is key now, take that and the southern part of Aleppo resistance will fade into nothing.

god give victory to the russian syrian forces, I am a christian american, seventh day adventist and aI am praying for russia in syria and thier situation in ukraine

the saudis ,turkey and u.s. suport of terroist has cost half a million lives and slowed getting the gospel of jesus christ to the world my heavenly father ultaimately and intamitly is in charge of this rebellious planet,he is coming soon,he will soon withdraw his protective hand from america,and terrible natural disasters not small will indicate his displeasure with all this evil that the jesuit controled new world order has ordered,may god cause thier plans to fail, may confusion and failure attend theses evil servants of satan.that his blessed church may preach the gospel fearlessly,and warn lovingly yet in might and power of the holy spirit.of what is to transpire