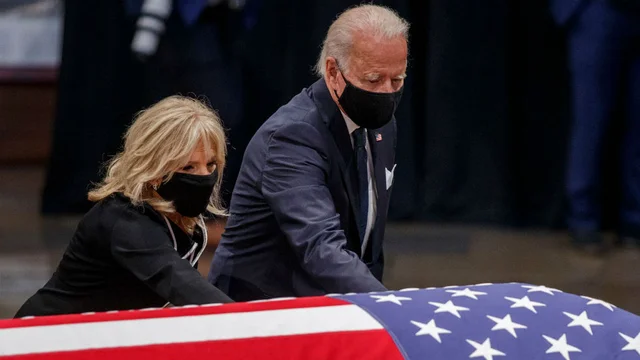 On July 27th, US Presidential candidate Joe Biden is ramping up populism in attempts to increase his chances of victory.

Former Vice President Joe Biden and his wife Jill Biden, visited the Capitol to pay their respects to the late Rep. John Lewis (D-Ga.) as he lay in state in the Rotunda.

he Bidens were accompanied by Speaker Nancy Pelosi (D-Calif.) as they approached Lewis’s flag-draped coffin.

Lewis died on July 17th at the age of 80 after a battle with cancer.

“We are made in the image of God, and then there is John Lewis,” Joe Biden said in a statement at the time. “How could someone in flesh and blood be so courageous, so full of hope and love in the face of so much hate, violence, and vengeance?”

The former congressman had endorsed Biden’s presidential bid a couple of months before he died.

“It is my belief that we need Joe Biden now more than ever before,” Lewis said in a call with reporters in April.

“We need his voice. We need his leadership now more than ever before,” he continued. “We need someone who is going to get our country on the right side of history and help save our planet.”

Later, on July 28th, at a speech in Wilmington, Delaware, Biden said Lewis told him on his deathbed that Americans should “stay focused on the work left undone to heal this nation and to remain undaunted by the public health crisis and economic crisis.”

He unveiled the fourth pillar of his “Build Back Better” plan – focusing on racial disparities in wealth and health.

“It’s a bold, practical plan that is going to help build a stronger and more just and sustainable economy for everybody,” Biden said.

His plan includes setting aside $30 billion of the $300 billion he announced in his first pillar for innovation funding for small businesses.

The goal is to leverage the $30 billion to make more than $150 billion available.

Beyond the $150 billion for small businesses, additional federal funds would benefit communities of color, but the Biden campaign hasn’t specified how much of the multitrillion-dollar plan would be directed toward those groups.

It is unclear how this plan would even be paid, but there’s hints by Biden and his aides that it would happen by repealing the Trump tax cuts, while other parts will be considered stimulus spending.

His first plank included some $700 billion to create 5 million jobs, the second detailed roughly $2 trillion for climate-friendly infrastructure, and the third promised $775 billion for caregiver and education jobs.

These statements are careful, in a way that they could be flexible depending on the economic fallout of COVID-19. There is little present in the claims other than pure propaganda and populism to win votes.

US has already “leaders” behind the scene, these guys that preside US are just wall papers.

True to elect clown like Biden can be embarrassing, they come to the scene elected to tell their jokes and just stand there because they forgot why are they there in the first place. America today as country doesn’t deserve better president.

I know. Just the puppets that dance to the tune of whoever is pulling the strings who are always there no matter who is elected. The elections are there just for the illusion that America has a democratic;y elected leader and the sheep fall inline.

Only 150 billion? Racist! Trump will promise jobs… Even more racist!

Luckily for U.S. Epstein(Mossad) didn’t get any pedo and homo videos on Trump visits of Epstein’s pedo island…..because they had only one camera that was broken at the time.

This guy makes the fagot using other people’s ass.

There is a color revolution underway in the US. That wouldn’t be happening if the US was Jew free. Which is what needs to be done to right the listing ship of state.

This doesn’t require killing or expelling them. But it does require outlawing and abolishing Judaism, and permanently closing the synagogues and yeshivas. So that American Jews go extinct.

This statement about giving “people of color” billions of taxpayer and created dollars is another example of a politician who will say and do anything to get elected. The fact is no matter how much money is dumped, this will have little, if any, positive results. Public school test scores and employment rates will still be much lower than for white people and Asian people. Suggestion: how about parents explaining to their offspring the importance of education, not committing crimes, not getting involved in drugs and the gangster lifestyle, finishing school, getting a job and doing everything to hold that job? Wishful, delusional thinking Joe.

That’s a rather radical statement, Peter :) What’s wrong with a life of crime, debauchery and fecklessness? It works well for career politicians :)

Let me put it this way: if you saw the amount of violence, crime, misery, poverty, ignorance, brainwashing and apathy in the countless American ghettos and you were re-incarnated as an American and forced to live under those conditions – you would commit suicide with a nuclear bomb. (If you have the time, visit http://www.nypost.com for some typical urban degeneracy, in this case New York. I also suggest http://www.heyjackass.com for an interesting insight about Chicago values and the latest bodycount. Reading is believing. Hopefully the content will not damage your computer. The types and amount of lawlessness is downright obscene. God Bless America! I’ll say it again, FOR WE AMERICANS THE EXTERMINATOR IS LONG OVERDUE!)

The ‘heyjackass’ site is most informative. The weekend spike in shootings is circa ‘+100%’ of a weekday for obvious reasons I suppose, but shocking nevertheless.

Can this mayhem ever be stopped? Are large parts of the US to be abandoned to the ‘ darkest forms of human nature’ ?

All arts of the world have been,and some are still suffering from, such mindless barbarism for thousands of years.

I never thought that the current US decline would be so fast. Only time will record whether the US decline is terminal. If it is, the UK could easily be close behind.

As former US Army officer, actor, governor of the state of California and President of the US Ronald Reagan would say: “You ain’t seen nothing yet!” I actually voted for this Hollywood yoyo twice but times were different back then.

If the crazies in the US decide that war with Russia and China is worth the risk , then the whole worlds populations could be equal for the first time as they shiver and die in a post nuclear war world. Even those who think they are safe in a bunker for a few decades.

Added to any bomb destruction would be the circa 450 nuclear power stations around the world that would explode. :)