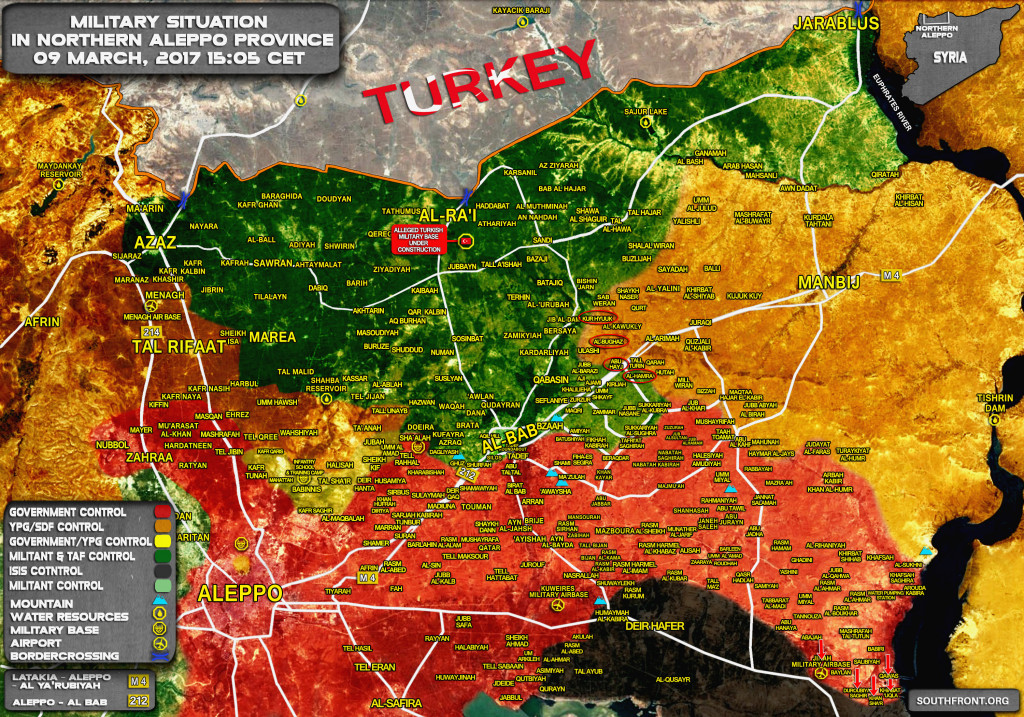 On March 9, the Syrian Army’s Tiger Forces, supported by the Syrian and Russian air forces, liberated the Jirah Airbase from the ISIS terrorist group in the province of Aleppo. The Tiger Forces also got control of the nearby villages of Idrisiyah, Baylan and Durubiyah.

UPD: The Tiger Forces were not able to secure the area. Intense fighting is ongoing.

UPD2 [19:15 CET]: The Tiger Forces control the airbase despite an intense fighting with ISIS terrorists.

The Jirah Airbase is heavily damaged as result of airstrikes and the ISIS actions. However, it has a strategic location east of Deir Hafer.

Now, when the ISIS-held town of Dier Hafer is de-facto cut-off from the rest of the ISIS-held area in central Syria, its liberation will become the main short-term goal of the Syrian army.

Experts believe that after Deir Hafer government forces will likely advance along the Deir Hafer-al-Tabaqah road, expanding the buffer zone east of Khanasser and putting an additional pressure on ISIS units operating in the area of Raqqah.

The hidden Russian-US cooperation in Syria was already proven with the Manbij case when Moscow and Washington acted together in order to prevent the Turkish army and pro-Turkish militant groups from attacking Kurdish forces in the area.

There is a chance that the US and Russia will act jointly in order to retake the ISIS self-proclaimed capital of Raqqah even if this is not promoted openly in the mainstream media. If government forces reach al-Tabqa, they will isolate Raqqah from the southern flank and US-backed forces will be able to avoid the need to cut across the Euphrates River in the area. In this case, the fall of Raqqah will take place much faster then it’s expected by experts.

I would say so. Slow, safe. Thats what SAA can.

Of course we all hope ISIS will collapse soon, but we dont know when soon is. Erode them away and dont make Tabqa to a kind of Palmyra.

Well they’ve already made HUGE strides in the past few weeks, you need to give them immense credit for that. They have decided ultimately its up to them to man up and finish this fight themselves. As long as they keep that good mindset, they will win the war, I have no doubt of that.

Yeah but ISIS was eroded heavily by the combination of over 3 years of attrition by the rival rebels, turks, kurds, US and russian airstrikes, etc. Credit to the tiger forces but their way was slightly paved. ISIS is now going through a negative domino effect – total collapse.

Can Jirah Airbase be used for attacking Raqqa?

Would probably have to be repaired first but I don’t see why not!

Yes, but mostly available for chopper only for now, for jet or large one need more intense repair to works

No way. Not even a gasstation for trucks should be there. Why should SAA take Raqqa at all.

there are already very good planes for Raqqa and Assads has hardly troops even to take suburbs to Tabqa if its defended.

If they just want to make all to ruins, they can bombarde from this minute. Both are full of spendable arabs.

Uhh Because its the ISIS capital?

Yusha Yuseef.Guy who have contacts with the Tigers.I also thought that the base was liberated.Few hours more and it will be

Has FSA/Turkey opened a new front in Western Afrin?

Man all of these airbases/fields need to be under SAA/RU CONTROL AND NO ONE ELSE!!!

Who else will have those ruins. You overestimate ruins having fine names, You hardly have an airforce.

Who else? I’m sure ISIS and turkey would love to have those “ruins”. Who are you anyway?

You can read some of my comments, about who I am.

If the airbase has been taken it proves that ISIS is not planning to make a stand in this area. Chances are that Deir Hafer will probably easily fall as well. So where will they make their stand? Tabqa for sure but probably before that, to give themselves some more defense in depth.

Als, again, small error on the map, in the southeast corner of the map the northern shore lake Assad is still shown as under ISIS control when it has been taken by the Kurds months ago.

Thank you for the feedback. We will improve this.

I dont know which map you prefare to, but kurds moved their main defence line 5 km west of the Tabqa dam itself. They cover the area with thin lines, so you can say its a kind of contested. ISIS has made at least 3 counterattack there – a big(10 km), a smaller 4 km and a very snall, which was reppeled right away.

So being ISIS there as kind of conteted is kind of ok. SDF/YPG tryed a kind of coup at Tabqa dam and are not there anymore. It gave great loses to them even airstrikes cleaned the road over Eufrat again.

Thats how I remeber it.

Where are u getting this info, did u visit there? Or know people on the ground?

I have been following it day by day from when they arrived the first time and ecerything has been moved forward and backward incl. american airstrikes.

I use many sources. Twitter, facebook, isisliveupdate, aranews, southfront, anhar news, al jazeera, but the point is, I follow it every day and therefore collect whats there – facts, fakes, thin & thick.

I also use a lot of time, but I see it as important to see the world this way. Some will say its a kind of hobby and always has been.

Right now I will fo to another hobby. I have to reduce a few things in my garden and among that a too big tree with too many nasty thorns. After that ít will be to move 2 green spargel plant to a complete new place with more sun and give them a little fertilizer.

I read all kind of maps well, because I always have and therefore often can see, what might happen next. Much is easy in Syria and Iraq, because the warfare there is not very advanced. I know my limits there and often are very carefull in my comments as an amatuer has to be. I use : seems so – could be. Very much in this war is kind of opportunism . what can possible gain is being done. I have been 100% wrong several times too also because its difficult to see military strenght and some things by good reasons has to be kept secret and as surprises.

My last really mistake was, when kurds said yes to help Der El Zor. Their first adavance wasnt to take a fortified ISIS vilage north of Der El Zor going around and defeating it.

I glad for they didnt, because I think kurds rather should help themselves by reducing Raqqa first. But I was wrong.

What do you think the Kurds and SAA should do now?

Do now. If its only military matters, its what they are able to witj succes.

SDF should defend Manbij County and reduce Raqqa from east. When they come closer to Raqqa itself, there will be heavier villages which might be harder defendent. If they have troops, they therefore should try to gain from west crossing irrigation channels taking vilages/hamlets and suburb terrain.

SAA should in the same kind of way to a its best to. Thats taking the big highway along Assad lake to Tabqa in a safe way. There is one more real town after the airbase crossing, which can be defended well. They have to take that fight. I dont think, they should ignore the Hafer area., but theu should secure their western front to it.

It wouild be a good thing to have Tabqa Dam and road and controll the power plant as well as water there and make a new tranport road to the southern part of Eufrat.

Im not a general, so thats my proposals.

Im also for – if SDF have – so to speak – too many troops, that they should eliminate Makrkada village north of Der El Zor. I think that valley is tuff, but they could reach Eufrat there and divide Der El Zor from Eufrat to the Iraqian border. ISIS still has a part of it in Iraq as well and heavy populated.

All very interesting points, I will pass it along to Syrian high command (I wish!) Lol

And they are holding onto them too!

Eell, there seems to be a single ISIS T 72 tank between that and hard figting too.

@ladata:disqus I was looking up information, do you think the Russians took the elite desert hawk brigade and formed them as the elite 5th legion (in my opinion, i don’t think so)? Last time we heard from Desert Hawks Brigade was from months ago. I know they are a private military branch, maybe that’s why they are doing missions on the lowkey so no one knows. Even I as a Syrian can’t figure out what’s going on with them.

Isn’t the Desert Hawks the unit that had advanced from Ithriya to near Tabqa Airport before being surprised by an ISIS counterattack and retreating all the way back to Ithriya?

Possibly, I can’t remember. So many covert ops Syrian Missions I sometimes lose track myself. But my question would be when was the Ithriya mission? Mind sending me a link?

if there is still intense fighting, they need to send in more forces, try a different strategy or more russian air support for petes sake!

They may encircle the airbase and keep moving west along the highway.

You really dont get it. they dont have it and they seems to do relativly fine compared with that. Go there Yourself.

What? You know this how??

http://isis.liveuamap.com/ lot of rubbish in it too.