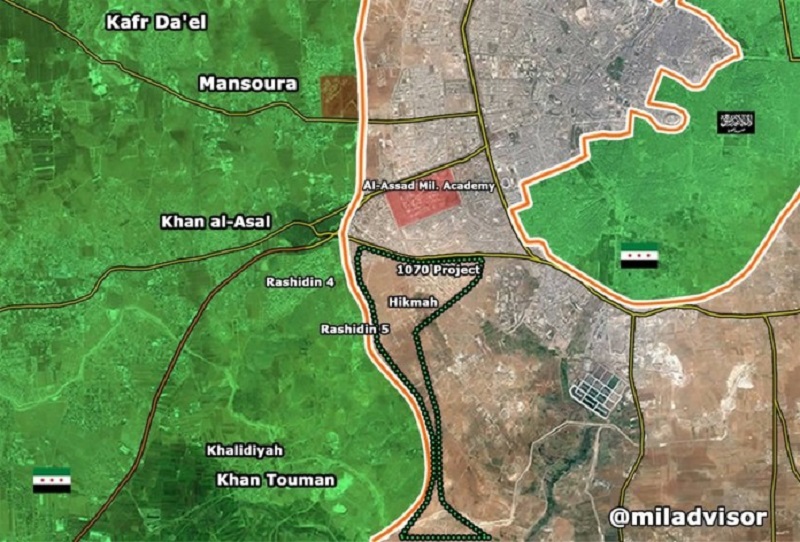 AlMasdarNews reports: The jihadist rebels of Jaysh Al-Fateh captured the 1070 Al-Hamdaniyah Housing Project in the southern sector of Aleppo City tonight after a violent battle with the Syrian Armed Forces and their allies.

According to a military source in Aleppo City, the jihadist rebels were led by two Islamist factions: Jaysh Al-Mujahiddeen and Jaysh Al-Islam.

Following the capture of this large complex, the jihadist rebels shifted their attention to the Al-Assad Military Academy, where they were confronted by a large unit of Syrian Arab Army (SAA) soldiers at the southwestern flank.

If the jihadist rebels are successful at the Al-Assad Military Academy, they will be able to lift the two week long siege on the east Aleppo neighborhoods.

The Russian Air Force is now conducting heavy airstrikes over the Al-‘Amariyah and Sheikh Sa’eed districts of Aleppo City in order to forestall the jihadist advance into government controlled areas.

Reinforcements from the Syrian Arab Army’s republican guard forces are expected to arrive this morning; however, if they don’t recover the 1070 Housing Project soon, they could be in for a long week.

its their last push , if they lose this time , they are done , small push over night is not big deal .

Last gasp of the FSA. They were safe up in the mountains/scattered amongst the villages. But now that they are concentrated in one big pile, they become Sukhoi meat for sure… Probably the biggest blunder the FSA has made yet.

Hopefully the Russians have stocked up plenty of cluster bombs. It’s still kind of sucky though because the jihadis always dig in like ticks when they take a site. Hopefully it won’t cost the SAA any manpower.