The Russian pro-opposition daily Novaya Gazeta published an investigation into businessman Yevgeny Prigozhin, who at this point has become the mythical face of all Russian military contractor activity on a global scale.

The article starts off by asking “Why has Yevgeny Prigozhin’s airplane fly to the Middle East and Africa almost every month? And what does the “Kremlin cook” cook in zones of armed conflict?”

Novaya Gazeta, together with the Center for the Study of Corruption and Organized Crime (OCCRP) tracked the activity of Prigozhin’s airplane and discovered that for a long while, the aircraft was moving to Africa and the Middle East, as if following a schedule.

“What does an ordinary catering entrepreneur prepare in areas of armed conflict around the world?” the piece asks.

According to multiple Western media reports, Prigozhin is allegedly connected to the suspected Russian troll farms, the alleged Russian meddling in the 2016 US Presidential election, the mythical Wagner Group private miltiary company, as well as the extraction of oil, gas and gold from various countries.

A Raytheon HAWKER 800XP with registration number M-VITO is Prigozhin’s. Since 2012, this business jet has been owned by the Seychelles company Beratex Group Limited, which does not disclose its owners.

But Prigozhin’s daugther – Polina published photos of the M-VITO aircraft on her Instagram (her account has since been deleted). 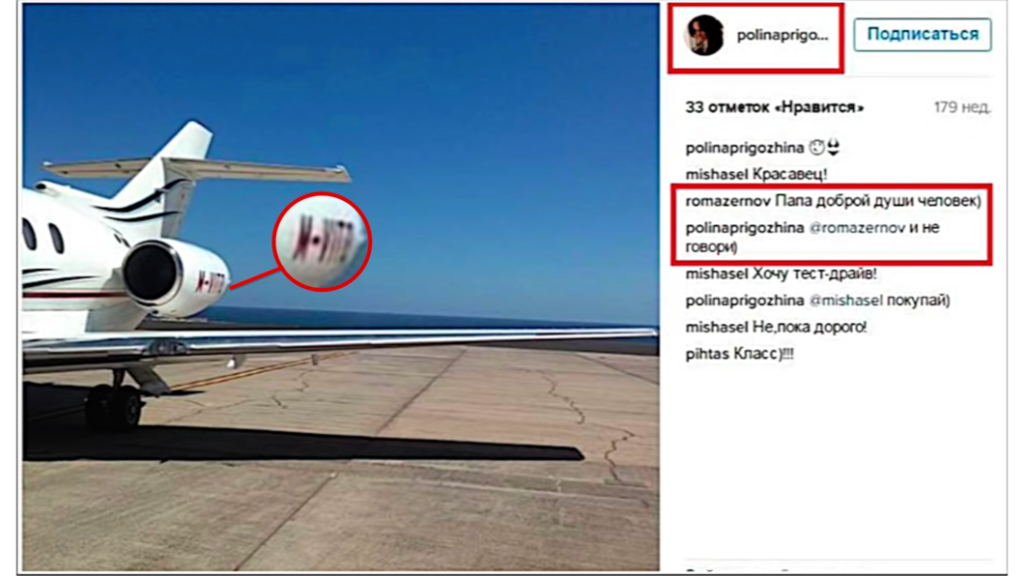 “Dad is a good-hearted person,” one of her friends commented on the photo. “You don’t say),” answered Polina.

So, judging by photographs in the “New” section, Prigozhin’s spouse and children have often been on board a business jet, whose interior is identical to the Raytheon HAWKER 800XP. The average price for an airplane of this class is $2 million.

So, the airplane flew the most between Saint Petersburg and Moscow. The second most common destination was the Middle East. In two years, the M-VITO business jet landed and took off 48 times from Beirut, the capital of Lebanon, which borders Syria.

In most cases, Beirut, judging from the flight details, was used only as a staging post, from which a few hours after landing, the jet flew to Syria or to Africa.

In addition to Syria, the airplane also flew to Africa. The first time Prigozhin’s plane was spotted in Africa was over Egypt on November 10th, 2017.

Shortly after this flight, in December 2017, Moscow received permission from the UN to send weapons and instructors to the Central African Republic, despite the embargo imposed in 2013.

Since then, according to tracking, the business jet has “disappeared” 27 times over Egypt, next to Libya or over it.

On December 17th 2018, the jet came flew from Sudan to Nairobi (Kenya’s capital).

According to the tracker, we see how M-VITO flew out of Berlin and landed in Beirut (Lebanon). Then on the same day the plane took off from Beirut and disappeared over Egypt. It turns out that a business jet flew over Egypt and first flew to Khartoum (the capital of Sudan), from where it went to Kenya. The flight was confirmed by the director of civil aviation Gilbert Kibe.

And in the flight details it can be seen how on December 23rd a business jet appears again over Egypt, makes a stop in Beirut and returns to Moscow. 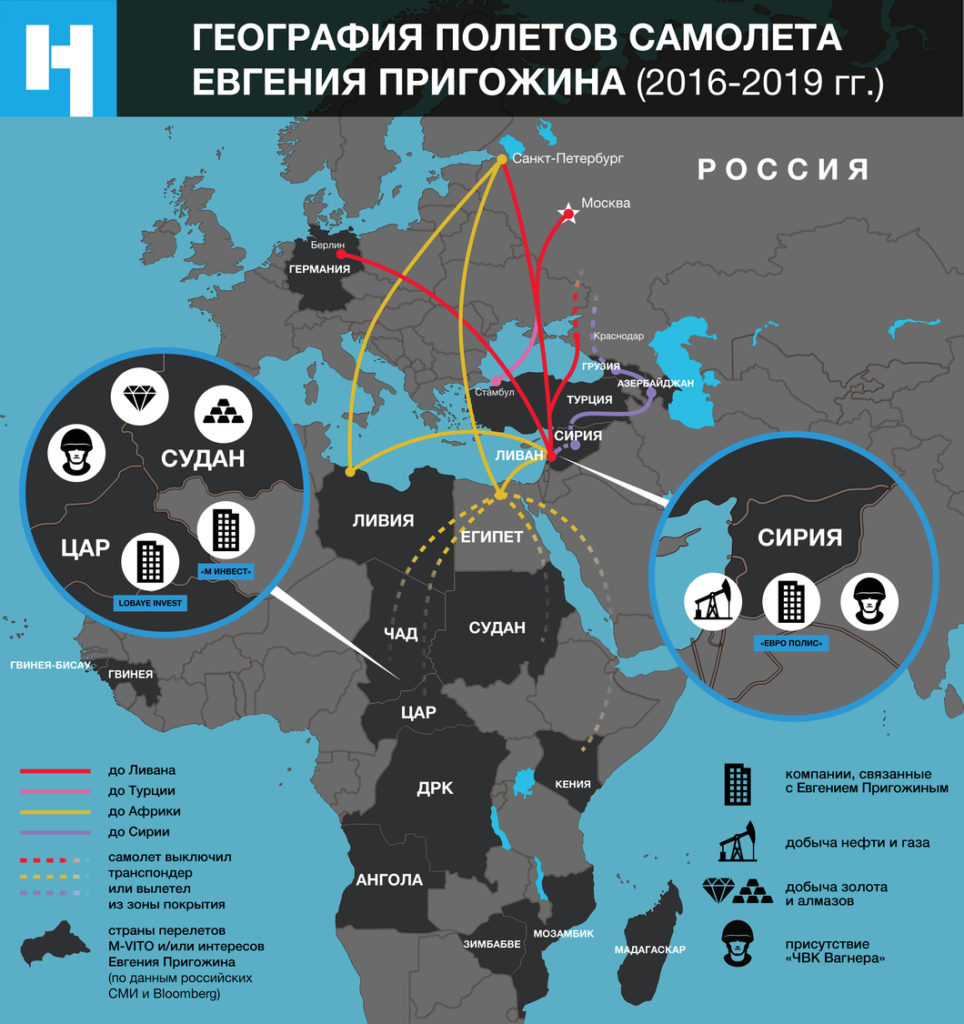 The investigation piece tracks some more flights of the jet, but the significant part of it is “Why he flew to the countries?” Despite this, the article admitted that the authors were not able to get data if Prigozhin was on board of the jet during these flights.

Novaya Gazeta discovered that Prigozhin was present at official talks between Russian Defense Minister Sergei Shoigu and Libyan Marshal Khalif Haftar. RIA Novosti explained that it was Prigozhin himself that “organized an official dinner and took part in the discussion of the cultural program of the Libyan delegation’s visit.”

Thus, Novaya Gazeta claimed that Prigozhin’s real objective is to organize meetings between high-ranking officials and companies affiliated with him and the Russian Army.

Later on the article mentions the murder of the three “journalists” in the Central African Republic, who were allegedly investigating the mythical Wagner Group.

The investigation piece, similar to other pieces in mainstream English and Russian media attempt to present the face of all Russian contractors as Yevgeny Prigozhin and attempt to track all of their activity based on his own. Even if a part of claims about Progizhin is true, the aforementioned article is an example how the lack of factual data still can be exploited to produce “breaking news” article and shape the public opinion.

It is said that Zakharchenko didn’t die from bombing attack, he was dying of boredom in Dumbass and now he’s in a great adventure in warmer countries along with Givi and Motorola.

You never know. Like the “disapeared” North Korean generals who wind up in China or elsewhere years later

Anything Western media puts out is met with automatic suspicion from me especially when it comes to countries that the US wants to destroy and therefore demonize. Right now we are over saturated with anti Russia, Iran, China and Venezuela. Demonizing is the Hallmark of who is on US regime change list.

Appears things are a little slow at Southfront and at the ‘Center for the Study of Corruption and Organized Crime’ as they tracked the activity of Prigozhin’s airplane ….. If these tracking folks find some spare time, I’ll send a list of our USA corrupt politicians.