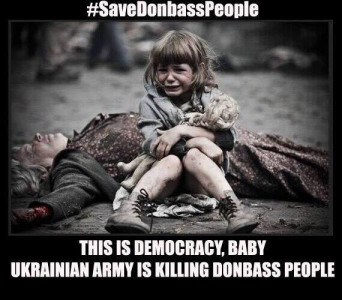 In the beginning of January 2015 17 people were killed during the terrorist attacks at the offices of the French satirical weekly newspaper Charlie Hebdo in Paris. That was the bad news and whole world has compassion upon it. More than 50 prime ministers and presidents from all over the world joined more than a million French people to march in the streets of Paris after the terrorist attacks. The action was called “Je suis Charlie”.

On 16 December 2014, seven gunmen conducted a terrorist attack on the Army Public School in the northwestern Pakistan killing 145 people, including 132 schoolchildren. Why does not West hold any march or reaction? On 2 April 2015, gunmen stormed the Garissa University College in Kenya, killing more than 140 students.   Where is worldwide reaction? Where is “Je suis Pakistan”? Where is “Je suis Kenya”?

In eastern Ukraine has been going a punitive war. Poroshenko’s regime kills children, women and eastern Ukrainians fighting against fascism in Kiev. He does not want to stop the war and continues investing western credits in new weaponry. The fascist regime bombs civil areas, schools, buses, crowded places in Donetsk and Luhansk. More than 1 million refugees have already saved in Russia.

West has blinded or does not want to see the obvious things. But who cares if Ukrainians kill each other. Who cares if this happens not in Europe or the US?!