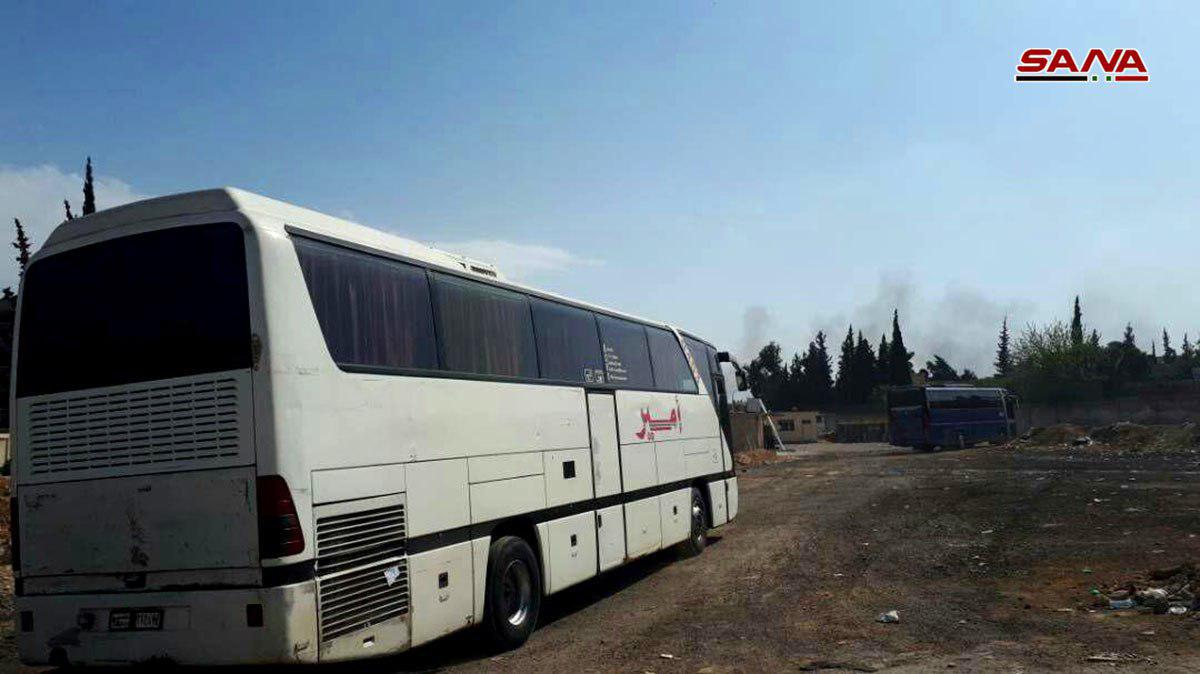 By SANA, Click to see the full size image

Jaysh al-Islam and the Damascus government reached a final agreement that forces Jaysh al-Islam to release all the captives from its prisons in Duma district and to withdraw towards the northern city of Jarabulus, the Syrian Arab News Agency (SANA) reported on April 8.

The news agency revealed that the agreement will be implemented within 48 hours and added that several buses had already entered Duma district to evacuate the first batch of Jaysh al-Islam fighters.

Jaysh al-Islam officials have not commented on the issue yet, which proves that an agreement was reached, according to Syrian pro-government activists. Previously, Jaysh al-Islam immediately denied all the reports that talked about an evacuation agreement.

Minutes after the announcement of the evacuation agreement, US President Donald Trump went nuclear and held Russia, Iran and the Syrian President responsibility for the supposed chemical attack on the Duma district. Local observers viewed Trump’s statement as an attempt to boost the morale of Jaysh al-Islam fighters.

The execution of the evacuation agreement will begin in the upcoming hours, unless the US and its allies make direct actions to sabotage the deal.

Well their fake CW attacks are really effective . They got the PRESIDENT to issue threats !!!

Only kids believe their stories.

You may not believe but whist e generalise the next generation as retarded snowflakes, I think they are in GENERAL quite the opposite.

Kids … and those who choose to believe it. Like France, the US and UK.

Maybe Americans will finally rebel for “no puppet” Trump and kill the Talmudic elites inside their deep state? They have over 500 million weapons, dumb retards.

Too many shows left on Netflix for such a thing to take place.

Who said that Netflix will be shut down? All megacompanies would be in right hands!

It’s hard but i do hope so there’s a good chances of USA citizens aware enough of these grave situation we’re in now.

Gregory Casey
Reply to  as

Why would they bother when they have Douma surrounded with Tanks!! Al Sham Terrorists have finally agreed to get out while still alive whilst also having themselves killed some of their leaders throughout past 48 hours ‘cos they weren’t hardline enough and had done a deal to leave with Syrian Government. Now, reality has begun to dawn on these Saudi Jihadi. Allah ain’t coming to save them nor Trump. Bye Byeeee.

BREAKING NEWS… satire or you a total, useless POS.

Peter Jennings
Reply to  as

You spelt your name wrong. You missed out an ‘s’

Oh the poor Donald. Now he’ll miss the chance to show his potency to his admirers sending his robots based on another White Helmots Fake News.

The PKK are no angels. They have been fighting both Syria and Turkey for a homeland that never existed. Maybe they got their ideas from isrealis or the US?

Maybe no one involved in the “Civil War” are angels? So invaders should leave.

Yeah I am wondering if Trump was just goading on Jaish al-Stupidity into fghting on in hopes of western help that would never arrive, thereby ridding the world of a few thousand jihadies.

Now there’s word of a deal that Jaish isn’t denying – and Trumpie is threatening to go bomb Syria again.

I really hope they kill some Ruskies this time. :-))))

Lets hope the US gets out of Syria ASAP. Let Assad take out ISIS and other Islamic terrorists.

You never believe invalide duck Trumo , he is world liar !

I really doubt any resulting agreement having to do with murderous terrorists and more if those were capable of such recent cruelty in faking such a chemical attack to blame the Syrian government killing dozens of innocent in the process. The only infallible agreement in that case is the very death and total destruction of each of these infamous terrorist monsters that both defend and praise its sponsors including the Trump itself.

Nothing verified regarding this at this point. could be baseless

This chemical attack is so bogus!

Anyone with two brain cells to rub together can smell the bullshit and the lies coming from the Jew spew media!

Donald talk what the establishment tell him to talk or speak

I will give the JAYSH AL-ISLAM green buses to hell

There are years of hard labour ahead rebuilding that which they have destroyed, so maybe they could do that job for subsidence wages until Syria is repaired. They were once slaves of the west, now they can be the slaves of the Syrian people until they are satisfied that penance has been done. Those who murdered in cold blood should face the consequences.

Agree with you. A few years of hard labour should straighten them!!

On the last occasion, one year ago, Donny let ly with a missile strike having been persuaded by his lovely vacuous daughter and her sneaky husband that the Syrian Air Force was so stupid. Meanwhile, and throughout the past 12 months, there have been numerous Reports of the Syrian Arab Army finding enormous quantities of weapons, including the ingredients for Chemical Weapons in places from where Jihadists of varying stripe and colour had been hanging out including a find of some 40 Tonnes 2 – 3 weeks ago. Syria, Russia and Iran have been on high alert throughout the past few months following reports and rumours of a Chemical Weapons incident being set up by a few of the Jihadist opposition groupings with the training and assistance of “experts” from UK, France, US & Israel who were embedded with them. Moreover, there have been reports of the capturing of personnel from these same Countries’ military in one of the underground ‘hides’ in the tunnels network established beneath E Ghouta: I think it’s beyond time for Syria and/or Russia to finally come out and confirm that they are holding these Jihadist educators ……………. I wouldn’t, in fact, be surprised if this so-called Chemical Weapons attack was and is being used to threaten Assad, the Syrian Government, its Military and the Russian Military in order that they will bow and relent and consent to the release of these prized prisoners.

The timing is important. These events and hoaxes tend to occur when the terrorists are close to collapse. They then push for a ceasefire with which they patch up their defences, plant more booby traps and film PR pieces for western news outlets to deceive the public.

Hunt down the white helMutts,and put them on trial for war crimes.They should be easily identified from all their oscar performances.They should not be allowed to escape,period.

They should then spill the beans on those in the UK services who have supplied them and provided their PR. The ICC should do the rest, with pressure to do so by Russia, China, Iran and BRICS countries. The rest of the eunuch world will follow suit.

It’s surprising that not one “reputable” MSM news outlet will actually mention the name of the rebel group in Eastern Ghouta. Oh wait, it’s not surprising at all because these psychopaths are trying to start WW3 and destroy us all!

Not even 1 in a 1000 of my brainwashed Western brethren are aware that these “rebels” are really Jaysh Al-Islam, a radical Salafist terrorist army. This is the most obvious false flag in history. Assad with nothing to gain, and everything to lose decides to launch chemical weapons while his enemies are negotiating surrender… how stupid do they think we are?

In real life, wolves would attack and eat antelopes while the antelopes would defend for their lives. However, in Western warmonger fairy tales, if the wolves work for them, they would dress the wolves in sheep clothing and proclaim them as victims, despite the fact that their mouths are full of blood and meat from the dead antelopes.

On the other hand, the antelopes that just try to defend their lives, from being eaten by the wolves, and have to kill the wolves, would be depicted as war criminals and get attacked by missiles or sent to the Hague. Welcome to the alternative reality.

Chemical attack fake news which trump likes. Anybody with a bit of logic would not believe it because why should the side which is winning the war use chemical. It does not make sense!

Someone called Intel Crab is reporting that the SAA are vacating installations in preparation for US strikes…..

Why do the Syrians evacuate these Salafist killers who made hell – for Syrian civilians- over the last years. Assad should execute them on the spot as we speak.

Rumors of air and missile attacks on Syrian bases outside Homs to clear the way for Turkey moving further south. Any truth to the rumors? If true who is leading Turkey, US, ??

As I said before: the only chemical attacks that took place were in the brains (if they have any) of Donald Duck Trump, child killer Netanyahu and the big mouth Erdogan. All of them suffer severely from narcissism. Narcissistic personality disorder (NPD) is a personality disorder with a long-term pattern of abnormal behavior characterized by exaggerated feelings of self-importance, an excessive need for admiration, and a lack of empathy. People affected by it often spend a lot of time thinking about achieving power or success, or about their appearance. They often take advantage of the people around them. The behavior typically begins by early adulthood, and occurs across a variety of social situations.

Treatments have not been well studied. Therapy is often difficult as people with the disorder frequently do not consider themselves to have a problem (typical of the above mentioned). About one percent of people are believed to be affected at some point in their life.It appears to occur more often in males than females..The personality was first described in 1925 by Robert Waelder, and the term NPD came into use in 1968. And we no doubt see this disease act in full measurement in the despicable characters of the child killer, Netanyahu, Donald Duck and Erdogan , not to mention Boris the Dim Wit Johnston and his scary grandmother, Tereasa May–enough for now . . . .