The cabinet of Japanese Prime Minister Shinzo Abe on 18 December formally approved a plan to spend JPY27.47 trillion (USD242.7 billion) on defence over the next five years, but hopes that this figure can be brought down by about JPY1.97 trillion through cost-cutting measures. Tokyo is seeking to implement a “cross-domain strategy” aimed at establishing superiority in the air, at sea, on land, and in outer space as well as in the domains of electronic warfare and cyberspace.

Government officials said at a press briefing that the Ministry of Defense (MoD) in Tokyo will buy an additional 63 conventional take-off and landing (CTOL) F-35As and 42 STOVL F-35Bs over the coming decade to replace 99 of the Japan Air Self-Defense Force’s (JASDF’s) 201 Boeing-Mitsubishi F-15J/DJ Eagle multirole combat aircraft. The new aircraft will supplement the 42 F-35As that the JASDF is acquiring to replace its ageing fleet of McDonnell Douglas-Mitsubishi F-4EJ Kai fighters.

Defence officials also pointed out that Japan will stop using a final assembly and check-out (FACO) facility for the country’s F-35As from FY 2019 and start buying completed F-35As and F-35Bs to reduce procurement costs.

Fine compensation to the America withdraw.

Japan is trying to catch up like US to present day weapons realities and strategies related, imposed on them by Russia and China.

The F35 is a towering example of American decline, F35 development started in 1992, it took until 2006 to get one into the air and it was 2015 before they entered service.
23 years, a quarter of a century to build a plane?

If you accept that the F35 is a lemon, and will never be an effective weapon, and that it would take the US another 23 years to replace, you then realize that the US is an ex air power.

I look forward to the day when the US is so depleted by her own culture of avarice , that the whole rotton edifice of pseudo ‘exceptionalism’ is laid bare for even the dullest of minds to see.

Good to see Japan giving Russian military spending a run for their money. A nice chunk of that will go to US companies for the best weapons on the planet. In less than 20 years Japan’s military will eclipse Russia. Even sooner for Japan’s Navy.
This is not surprising since Japan’s GDP is approaching 3x Russian’s.

your brain damage…was that a car accident or born???

“Symptoms of late-onset Tay–Sachs – which typically begin to be seen in adolescence or early adulthood – include speech and swallowing difficulties, unsteadiness of gait, spasticity, cognitive decline, and psychiatric illness, particularly a schizophrenia-like psychosis. ”

“Ashkenazi Jews have a high incidence of Tay–Sachs and other lipid storage diseases. In the United States, about 1 in 27 to 1 in 30 Ashkenazi Jews is a recessive carrier. The disease incidence is about 1 in every 3,500 newborn among Ashkenazi Jews.
Tay–Sachs disease – Wikipedia
https://en.wikipedia.org/wiki/Tay–Sachs_disease “

Grow up, Tay Sachs is a horrible genetic disease that we should not with on our worst enemy. You are just making a fool of yourself and insulting every family stricken by it.
Instead we should all pray CRISPR cures Tay Sachs

Perhaps this horrible disease could be eradicated via sterilization?

Try to find Japan and Russia on this graph.

So you have all your assets in Russian Rubles. Back in 2010 took around 30 Rubles to buy just one US Dollar. Today it takes close to 70 rubles to buy just one US Dollar. Japanese Yen has been around 100 per USD since 1993. Just keep betting against the US and Japan. Come to think of it that $500M in US Treasuries is probably one Putin’s private holdings.

America claims that China plays unfair in trade by keeping the value of the Yuan low. At the same time claiming that a low Ruble means Russia is going broke.

These 2 opposing views can be held by the American brain simultaneously.
It’s called cognitive dissonance and is a well known psychiatric condition.

The US of Arrogance always creates new measurement tools to suit their immediate needs. Hypocrisy to the max.

This is what I meant to load. 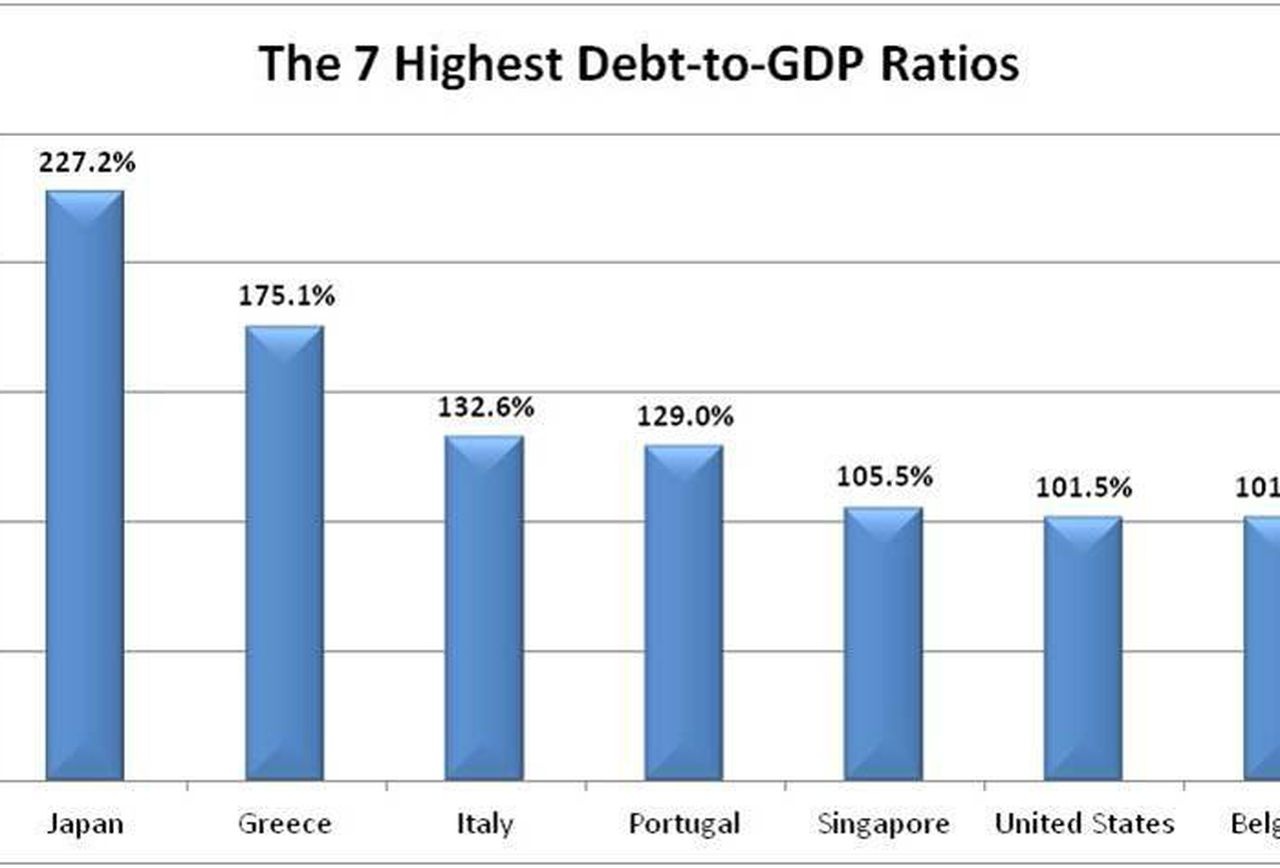 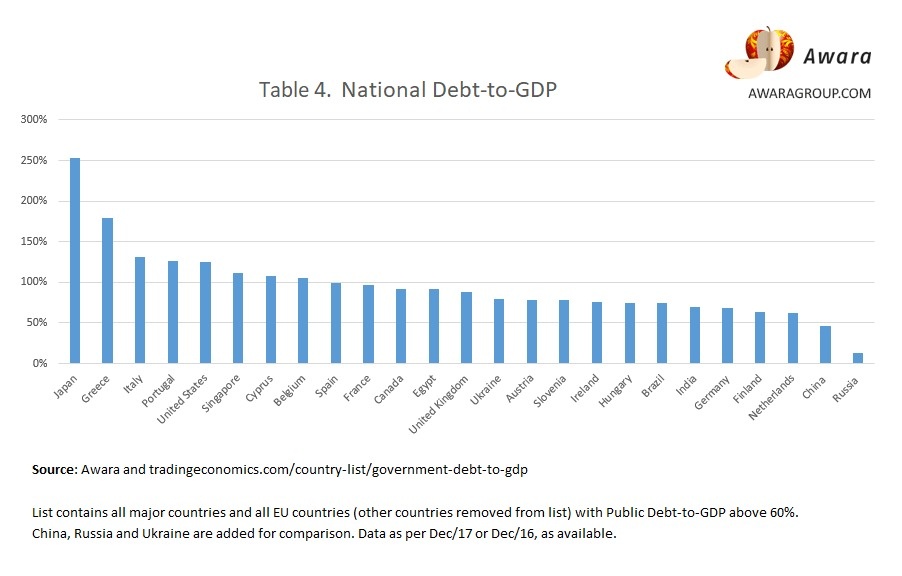 You have hit the nail on the head.
Western debt is destroying them, all the recent American crazy stuff, is to try and stop ending up in a debtors prison.

Best weapons on the planet? Please name half a dozen of such weapons that came out of the MIC’s pipeline?
Russian GDP/PPP is close to 4 trillion, while Japan’s is 4.8
Russia is spending less money than Japan and is able to field weapon platforms that would defeat Japan conventionally.

Of course Russia can defeat Japan today. My prediction is after less than 20 years of a dominant economy, technology and military spending Japan will surpass Russia. Remember WW2 when Russia refused to fight Japan and forced the far superior US to take out the third player in the Axis after taking out Mussolini’s Italy and Germany. All Russia was able to do was help out with Germany, which was no small feat. Still Russia fed off all the Iron Curtain countries until Regan drove Russia into bankruptcy. Now the very countries that Russia sucked the life out of just like a leach including Poland and Ukraine are even more opposed to Russia than the US and most of Western Europe.

“””Of course Russia cannot defeat Japan today. My prediction is after less than 20 years of a dominant economy, technology and military spending Japan will surpass Russia”””

You base your statements on wishful thinking and delusional propaganda?
What weapons does Japan have to attack Russia? Most of their weapons are US made and US weapon performance, abilities and uselessness have been proven in Syria.
Japan does not have any strategic bombers nor significant standoff weapons or delivery systems, air defenses or EW…..etc.
Russia,on the other hand can employ Tu95, Tu160 and Tu 22 to rain an array of standoff weapons to take out their command and control centers, airfields, logistical hubs; employ EW to interdict C4ISR and render it useless.
Use air or sea launched Kalibr missiles as a second wave of attack, while Japan will be unable to respond in any effective manner.

Of course, Japan has been a receding economy, and it will continue to recede, its population is getting older, and the general demographics are not favorable.

The rising sun is setting, while the dragon is getting more fiery and the bear is growling.
The future of Japan and US are closely inter related together. US is on a decline, it is dragging all its allies down the trajectory of decline, no exceptions.

You have to think like an American to understand. To an American, the more expensive something is, the better it is.
For example a lot of Americans think Trump is smart, because he is rich.
American culture is based on greed and power..

A proof, that too much indoctrination can cause damages. Poor guy!

Good to see Japan giving Russian military spending a run for their money. A nice chunk of that will go to US companies for the most expensive weapons on the planet. In less than 20 years Japan’s military will eclipse America. Even sooner for Japan’s Navy.

I just want to remind Japan that China did not lunched any nuclear bomb to its people, but USA did.

Same as Germany and Italy. Check where the majority of US troops are stationed overseas and all is visible.