Japan estimates that over the past decades, the DPRK has carried out 168 missile launches and 6 underground nuclear explosions. In 2022, the frequency of launches has significantly increased.

Since then, the number of launches has grown. This year, at least 59 missiles have already been test-launched, including the most recent test which took place on November 18. 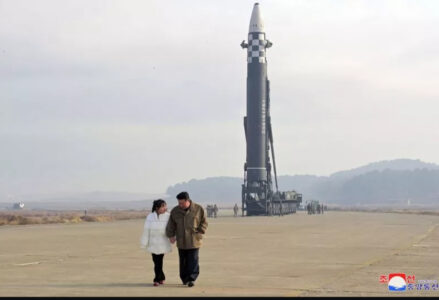 According to information provided by the Joint Chiefs of Staff of the Armed Forces of the Republic of Korea, the launch took place at 10:15 a.m. local time from the town of Sunan. The missile in question was likely the DPRK’s new intercontinental ballistic missile Hwasong-17 which was first revealed two years ago. The rocket flew in eastern direction at the altitude of 6,100 km and reached the speed of mach 22 and fell in the exclusive economic zone of Japan about 1,000 km from the launch point.

The test-launch of the rocket allowed to establish the maximum range of the rocket which was at least 15 thousand kilometers. The North Korean Hwasong-17 can hit any target on the territory of the United States.

Now it is expected that Pyongyang will soon conduct nuclear tests, which will already be the seventh in a row.

And South Korea, Japan and the United States have just been watching?

Or will an animation from that union take longer time to create.

NK has the ability to annihilate the US in about 25 minutes. Or if NK uses SLBMs instead, US will be done in 5 minutes. If NK launches EMPs, the whole population of US will be gone and perished and no one will survive.

The fish will join NATO if this continues

Well worth the read: