On July 30, Japanese Defense Minister Itsunori Onodera announced a plan to deploy the Aegis Ashore missile-defense system by 2023. The military training grounds in the Akita and Yamaguchi prefectures are prospective sites.  This decision is a “big-ticket purchase” that could also help Tokyo smooth trade friction with Washington, amidst the Trump administration’s threats to hit Japan’s auto imports with new tariffs.  Reuters cited Japanese media reports that have put the cost of the two sites, which will include the Aegis air-defense system, missile launchers, and interceptors, at around $6 billion. Japan has chosen the Lockheed Martin Corp’s SSR radar, with a far greater range than the Aegis radars currently operated by the US Navy. Officially, the move is being justified by pointing to the threat from North Korea. 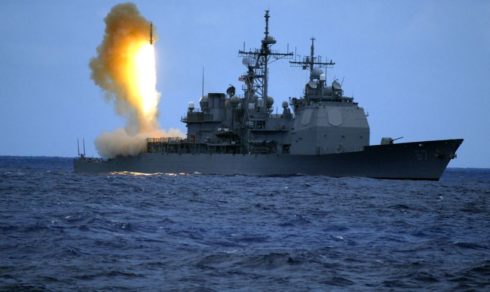 Japan has purchased F-35 fighter aircraft, V-22 Osprey tilt rotor aircraft, and AAV-7 amphibious vehicles, which will ensure a steady paycheck for US defense contractors. In fiscal 2021, Japan will fly the US-made RQ-4 Global Hawk unmanned reconnaissance aircraft to monitor security situations, including military moves by Russia, China, and North Korea. It will be based at the Misawa Air Base in the Aomori Prefecture, close to Russia’s shores.

Japan currently operates four destroyers equipped with US Aegis missile-defense systems carrying SM-3 intercept missiles capable of intercepting a ballistic missile at altitudes above 310 miles. There are plans to build four more missile-defense-capable ships by the early 2020s. Two Atago-class destroyers are being modified to operate the Aegis, and there are plans to add one of those to the arsenal later this year.  Aegis-equipped ships in and around Japan, as well as Patriot batteries, offer another layer of defense.

It’s important to build and maintain an infrastructure that will serve as a basis for further enhancement of one’s operational capabilities. The introduction of the land-based Aegis will inevitably entail the acquisition of extensive supporting systems.  With the new type of SM3 Block 2A missile, boasting almost three times the range of the SM3, the country’s missile defense will be significantly strengthened, posing a threat to Russia’s and China’s strategic nuclear potentials. In its tests, the Aegis has also proven effective against low-flying satellites, making it an element of space warfare.

The Aegis can intercept intercontinental ballistic missiles (ICBMs) upon reentry. Based in Japan, they will be fitted with information-exchange systems enabling them to operate as a link in the US global ballistic missile-defense (BMD) system, by sending data to Ground-Based Interceptors (GBIs) based in Alaska and California. The invaluable cuing information sent to the American mainland facilities will significantly enhance the overall ability of the US military to intercept Russian and Chinese missiles.

The foreign and defense ministers of Russia and Japan held 2+2 talks July 30-August 1. This was the third meeting in such a format, with the previous two taking place in 2013 and 2017. The planned Aegis deployment was a controversial issue.

Russia views the deployment as a threat to its national security, dismissing Japan’s claims that the move is being made solely to counter Pyongyang’s nuclear program. Moscow believes this argument is no more than a pretext, and the Aegis Ashore deployment is a disproportionate response to the North Korean missile threat. Japan’s reassurances that the system would remain under its independent control ring hollow, as the US and Japan are both involved in an effort to create a global BMD system. Besides, there is no way to verify this claim. Japan is working with the United States to undermine Russia’s strategic deterrent and this fact cannot be denied. The US National Security Strategy states that Washington “will cooperate on missile defense with Japan and South Korea to move toward an area defense capability.”

The Aegis Ashore uses the same Mk-41 vertical launch systems as the US warships that are capable of launching intermediate-range cruise missiles. This makes Japan complicit in a violation of the 1987 Intermediate-Range Nuclear Forces (INF) Treaty.

Putting US F-35Bs on Izumo-class “helicopter destroyers,” which are actually aircraft carriers, will also pose a threat to Russia. F-35s are nuclear-capable strike aircraft. Toyko will soon own 40 of the F-35A jets, with the first one — built right there in Japan — becoming operational in February.  There will be 10 of them by the end of the year stationed at Misawa Air Base.

According to China Military, Japan could go nuclear “overnight” with its current stash of 47 tons of plutonium, enough for about 6,000 nuclear bombs. Minor modifications are enough to turn the Epsilon solid-fuel carrier rocket into a potential nuclear-tipped ICBM with a range of 12,000 kilometers. Japan’s 22 submarines can be modified to launch cruise missiles fitted with nuclear warheads, and Japan’s F-15J military aircraft could become nuclear with some modification.

The Aegis Ashore deployment is a reality Russia cannot ignore. It will adapt its military planning accordingly. In January, Prime Minister Dmitry Medvedev signed an order authorizing the Ministry of Defense to station military aircraft at the civilian airport on Iturup (known in Japan as Etorofu) Island. Other steps will follow. This move will cloud the two countries’ bilateral relations and hinder any effort to reach an agreement on the Kuril Islands or a peace treaty.

None of the system have proven anti ballistic missile characteristics.

“…Putting US F-35Bs on Izumo-class “helicopter destroyers,” which are actually aircraft carriers, will also pose a threat to Russia. F-35s are nuclear-capable strike aircraft…”

Really? What kind of threat is that?

1) One has to assume the F-35s on the ship are capable of flight. 2) They can’t asphyxiate the pilots during a mission – at least until the bomb is dropped. 3) The buggy software that argues with itself has to have reached a point where they can actually release a bomb, much less one with the complex arming and permissive action link security features of a B-61. 4) The B-61 dial-a-yield hydrogen bombs would have to be stockpiled in Japan ahead of time for potential use. I’m guessing there would be certain… er, objections to that from the Japanese public. 5) You would need to assume willingness by Japanese pilots to nuke Russian cities or ports over whatever bullshit excuse the U.S. might cook up (the B-61s can only be unlocked for arming by the US). 6) Japanese leaders would have to be willing to sacrifice most of Japan, because a nuclear attack would be met with a nuclear response. Flight time from central Russia maybe six or eight minutes. An R36M2 can carry ten 800 kt warheads and plenty of decoys. This link shows the potential effect on Japan. https://www.youtube.com/watch?v=TXi4qUQYkbg

You dont understand it. Its a link in the US global “defence” system (=offence system) and as such works as leverage and pressure on those not in the link. Japan will not attack separately but as one of many bases encircling China and Russia.

Yr lnk shows only a missile being fired.

The words ‘This link’ are the link to the graphic. Doesn’t it show up in a different color or underlined to show it’s a link?

Whether the Japanese-based radar/missile shield is connected to the U.S. network or not, it will have and incrementally destabilizing effect on anti-proliferation and the potential for nuclear use. I am less safe in the U.S. for those exact reasons, and that risk is not offset from the potential (but questionable) additional protection of a forward-based radar and interceptors.

I also didn’t know Japan was under any particular nuclear threat from Russia or China that would warrant nuclear arms for protection. In fact, if Russia or China were going to attack the U.S. mainland and were worried about early detection and interceptors, they would target Japan’s radar site first as well as those of Turkey, Poland and the U.K. So the Japanese have increased their ability to protect themselves from questionable or non-existent Russian or Chinese aggression directed specifically at them, but Japan has also added the entire additional risk of being ‘part of the U.S. network’ in a Russia/China vs. U.S. war that may have nothing to do with them, yet places them at the top of the target list.

Japan’s F-35s nuke capability would have to be added to use the only gravity nukes the U.S. has: the B-61. U.S. F-35s are not scheduled to add that capability until 2020 – 2022, and Israel’s, NATO’s and Japan’s F-35s would be scheduled after that. The U.S. only has 360 or so B-61s operational in the states and 180 at five bases in Europe. Probably a secret stash in Israel as well. If the U.S. created another stockpile in Japan, then Russia/China will have to consider all Japanese F-35s departing that base as potentially nuclear armed and the base itself would be targeted. That’s incredibly destabilizing and increases the chance for misunderstanding of intent, potentially creating a unintended chain of events that could lead to a nuclear war.

The only things certain about Japan following through with this is, the military industrial complex in the US gets richer, the Japanese people get poorer, a big colorful bullseye appears over the territory of Japan and…… with such a short flight time to Russia’s borders, ensures that japan will sink below the waves due to nuclear annihilation long before anyone takes the time to find out if what Japan fired was nuclear or not. With such decisions being made by the Japanese elite, turning over the lives of the Japanese people to the demented Deep State of the US, it’s just a question of time.