The leaders of the member countries of the regional alliance are holding by now a briefing to discuss welfare and cooperation issues. 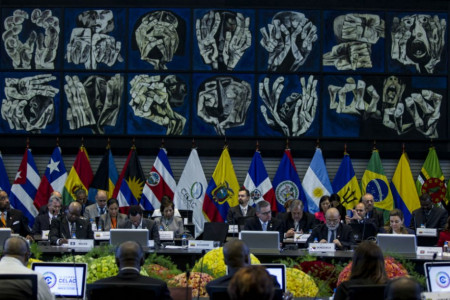 Today, in Quito, capital of Ecuador, the presidents of the member states of the Latin American and Caribbean States Community, LACSC (CELAC Comunidad de Estados de Latinoamérica y el Caribe, in Spanish) are holding the corresponding summit of 2016 (IV) in UNASUR’s headquarters to discuss a series of subjects of interest for the region and extra-regional issues as well.

The agenda for this year’s summit includes items such as: regional integration, commerce, connectivity and investments. Also, the Ecuadorian leader, Rafael Correa will finish his pro-tempore presidency period of the organism for Danilo Medina, president of República Dominicana to become the new leader of LACSC.

One of the main topics of today’s briefing will be the discussion of effective measures to cope with crisis in the region (high rates of poverty, unemployment,, inequity) by means of economic and technological cooperation, not only among the countries that are part of the community, but also with nations of Europe and others like Chine who is actually making huge investments in the region.

Poverty rates in the region are not currently decreasing significantly, not only because of the policies that each government has been implementing to guarantee welfare of the citizens, but also due to the crises that are hitting most economies around the world.

In the opening speech of today’s summit, Rafael Correa ratified LACSC’s stance as a peaceful and nuclear weapons-free region that strongly condemns any manifestation of terrorism and neo-colonialism. Correa also highlighted the fact that the different impasses and conflicts of diverse kind in the region are effectively solved by the members of the organism, namely without the intervention of external influence of bigger and much more powerful nations that have ruled the destiny of some of the countries in Latin America and the Caribbean through history.

Therefore, it has come under analysis how effective the role of the Organization of American States (OAS) is nowadays is with its anachronic policies and highly condemnable participation in the solution of regional conflicts like the one that involved Argentina and the UK in 1982. Could LACSC assume OAS role in a more efficient way? Is the region strong enough to assume a leading role into world politics? There’s still a long way to go to enhance even more the unity of the region and inner capabilities of each nation.

LACSC was created in 2010 as the result of previous organizations such as Rio Group and CALC (Cumbre de América Latina y el Caribe).