It’s not just a trade war: behind that, hides a tech-war – and behind that, lie the plans for a full-spectrum arms race – from space to cyber. As one US current commander put it:“fields of data and information … that’s what modern war runs on. “What are the missions we do in space today? Provide information; provide pathways for information; in conflict, we deny adversaries access to that information”. So, the new arms-race is as much about retaining and advancing US tech-leadership in chip evolution, quantum computing, big data and Artificial Intelligence (AI) for weaponry – as it is just about tech lead in the economic sphere: i.e. dominating civilian industry standards for the next generation of those smart electronic gadgets – that we all will buy. 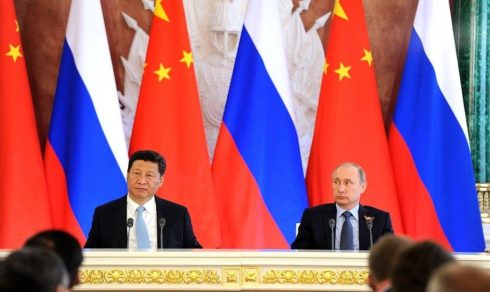 So, what is going on? Well, the US military complex is ‘for real’ on this. They are gearing-up for the coming military-standoff with China. The constant harking on themes that China is stealing America’s technology, its knowhow and its data – and now the barrage of allegations about China ‘hacking’ and (shades of the Russiagate) interfering in US elections, essentially (but not wholly) is about shaping a casus belli versus China. The rude fact is that the US military were shocked to find how far they were falling behind Russia and China in high-tech weaponry.

A bipartisan, expert US Defense Department report submitted to Congress in November, warned:

“America’s military edge is diminished, and in some cases erased – just as rival countries are getting savvier, stronger and more aggressive … America could lose the next war it fights … It might struggle to win, or perhaps lose, a war against China or Russia. If the United States had to fight Russia in a Baltic contingency, or China in a war over Taiwan, Americans could face a decisive military defeat …

“Adversaries have studied US military strategies, and learned how to counter them”, said commission co-chair Eric Edelman: “They’ve learned from our success – and while we’ve been off doing a different kind of warfare – they’ve been prepared for a kind of warfare at the high end – that we really haven’t engaged in for a very long time”.

Ordinary Americans have not been accustomed to think of China as a ‘threat’: Maybe as commercial threat, yes – but not as a military opponent, per se. But the stream of allegations about how China is ‘stealing’ America’s prosperity and jobs, are intended to change that – Public opinion is being ‘groomed’ for conflict.

So is this all about the US’ tech rivalry with China? Well, unfortunately no. It is simply that a casus belli for Russia is un-necessary. Russia has been so integrated as an adversarial antinomy; so commingled into domestic US politics, that any ‘grooming’ of the public, simply is superfluous. It is taken for granted now, that Russia is ‘enemy’. Trump’s foreign policy ‘hawks’, such as John Bolton and Mike Pompeo, have in their gunsights Russia, as much as China. The Defense report to Congress makes that clear: It is China and Russia. But it is that the ‘hawks’ do not blow so much smoke about Russian malignity, as China, as there is a public to be convinced about China.

The tactics for this tech, Cold War have been set out by Administration officials quite clearly: Forbid the export of emerging or ‘foundational’ technologies; restrict tech access to individuals, as well as companies; and write sanctions to cover the range of foundational technologies, and tech-manufacture knowhow. And cut-off China from key supply-line component-makers. And badger Europeans to boycott Chinese tech.

And Russia? Is it somehow apart from this ‘war’? Well, Russia, plainly, is different. It doesn’t have the same interpenetration with the US on tech, and its defence and avionics capabilities are largely home-grown – albeit with some limited vulnerability in terms of component requirements.

But America has other, ‘foundational’, technology knowhow: And the ‘tech-war’ principles of denial towards China can be applied just as readily to Russia – albeit in a slightly different mode. Trump has made a point of declaring that the US intends to be globally energy dominant. And the US Interior Secretary has, in parallel, linked America’s energy primacy to the possibility of a physical blockade on Russian oil exports: Ryan Zinke told the Washington Examiner in September that the US Navy has the ability to blockade Russia from controlling energy supplies: “the economic option on Iran and Russia is, more or less, leveraging and replacing fuels. We can do that because … the United States is the largest producer of oil and gas.”

In practice, such action is unlikely. It is bombast: the US wants crude prices down, not up. But the point here, rather, is the US focus on Russian energy. Zinke’s remarks demonstrate the DC mindset: “Russia is a one trick pony”, he said, underlining that Russia’s ability to sell energy, is paramount to its economic survival.

But the China tech-war precedents, in terms of component denial and sanctioning technology transfer, are not only more plausible in the case of Russia: they already are happening (i.e. in the threats surrounding NordStream 2, which mirror the arm-twisting Europeans are experiencing against purchasing Huawei’s 5G infrastructure). Again, as with the case of China, the US is pressing on multiple geo-political pressure points onto Russia – simultaneously with trying to hobble it economically, through sanctions. Next year – almost certainly (it is a legal requirement) – the US will unleash a new torrent of Russia sanctions in respect to the Skripal event.

Is this just sabre-rattling to keep American imperial spirits high? Should we take seriously the notion of the US Administration triggering geo-political shocks, sufficient to shake, what is left of ‘the global system’? I think it quite possible. President Trump will be enmired in the coming year with saving himself, his family, and his businesses, from myriad investigations on the one hand. On the other, he will be fighting the Democrats in Congress – and, should the markets tank badly, his leverage over Senate Republicans, will evaporate. There are enough RINOs (Republicans In Name Only) ready to cheer on a Brutus, when conditions become ripe.

And beyond the US, many potential flashpoints are evident: The Gulf is fearful; Saudi Arabia is in internal conturbation; Poroshenko is trying to save his political skin; America has been (until yesterday) attempting to sustain a long-term military occupation in Syria, to which Turkey is militantly opposed; Israel is flexing muscles on Hizbullah’s doorstep – and with Europe on the cusp of a possible economic downturn, the Yellow-Jacket symptoms likely will erupt, in response, in diverse apparitions. Brexit, Italy, Sovereign Debt spreads, Banks – all spell rising risks, whether containable, or not, we shall see.

But here is the point: whilst Trump is glued to his TV, tracking every twist and turn to the domestic assault on his sensitive self-esteem, his two warrior wings: the China hawks and the Middle East hawks will be piloting at the NSC controls – under the craft’s captain, Mr John Bolton.

What are the risks of major policy mistakes, mal-administration, internal US paralysis, US market doldrums and a distracted President, permitting his ideological hawks to trigger some volatile flashpoint? Quite high, maybe.

In addition to cheap labour, I can think of two other elements: One was the German scientists brought to the US after WW2 which pushed the it high enough until they got old and replaced in the late ’70s to ’80s. We don’t see any amazing hardware anymore, nothing comparable to for example Saturn-V, F-14 or PC-2 in their time. The other element was attracting the brains from all over the world to the US by providing comfortable living conditions and high salaries. In today’s world, there are more attractive options than the ones the US provides, many of the brains no longer leave their own countries or go somewhere else other than the US.

There are other factors, like overly political correctness that can ruin one’s life if one is unfortunate or careless enough to say a wrong thing at the wrong time and introducing ideology in decisions where it shouldn’t be a decisive factor at all. Not to mention the rampant corruption.

I think the other two are more important to understand why there’s such a sharp decline in the US tech output. PC and ideology will ruin whatever left of the talents.

“Adversaries have studied US military strategies, and learned how to counter them”, said commission co-chair Eric Edelman: “They’ve learned from our success…”

WTF… does he mean Grenada?

This is something of a non issue and is baked into the cake. It’s part of moving human progress forward. The Russians and Chinese are fully aware of the risks of not keeping up with technology advances and are unlikely to be left behind. The problem with the US is that it’s controlled by Jews riding it and NATO as a war horse to conquer the world with.

Jews and their control of governments are an impediment to human progress and a threat to all of humanity. Judaism should be done away with by outlawing it and closing and demolishing the synagogues and yeshivas to provide humanity a fresh start free of Jew crime and evil.

I got my night vision camcorder operational for Christmas home movies. The night vision range with the built in IR illuminator has a range of about 15 to 20 feet. There are IR illuminators the size of a compact flashlight that can push the night vision range out to 300 meters. This in combination with the Seek Compact Pro thermal micro usb port camera that I bought for my Android devices should provide a significant upgrade for ET/ED/non conventional life form contact work, such as Bigfoots or chimeras like werewolves, in the remote wilderness on contact ops.

Bigfoots are well documented, some of the more rare cryptos like werewolves much less so. What they are, or if they even exist as a physical species in our dimension isn’t a question that I have an answer to. I’m not seeking them. But being prepared to interact with them is similar to my approach with bigfoots. I’ll deal with it on an as needed basis if it becomes an issue.

Capitalism requires constant growth, without growth it collapses back in on itself. The only part of the world the US has not pillaged is central Asia. If the USA cannot conquer and pillage central Asia it will die.

There is still some fat left in Europe but you are right. When Europe goes into recession because of the $15 billion dollar bills on EU banks, Auto industry and F35 deals, there is only the fat lamb China and surrounding left.

Public opinion is being ‘groomed’ for conflict. There is the most telling comment in the article. The question is – WHO is doing the grooming. Number two question – WHY are they grooming anyone for anything? Number three – WHAT is the outcome that THEY desire?

If the WHO is identified publicly and clearly then the WHY and What can be questioned by any American in any of the supposedly sovereign (by the people) states.

If the WHO is removed completely – then who is the new WHO and will it be clearly identified and agreed with by much more than the insane and ridiculous 51% in any land of the people. Agreement must instead be by a super majority of at least 80% of legitimate and conscious and trackable physical tally (not electronic, ever) count. In any physical land the time it takes to discover popular will is NOT critical. This would be true agreement whereas 51% is gross stupidity, and it is worldwide stupidity.