On how the hidden powers are trying to tame or to overthrow the new US president. 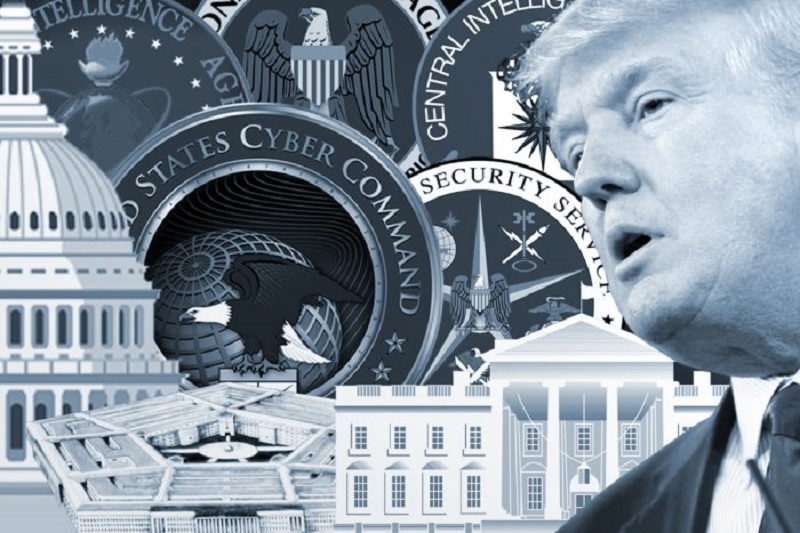 Donald Trump, of course, did not think it would be easy. And he was not afraid of the difficulties. His business career was full of ups and downs. He fought rivals, the clumsy bureaucracy of American cities, a shortage of working capital, skeptical investors and staff inertia. And, to all appearances, he did well.

His 2015–16 campaign was probably one of the most unpredictable and difficult in US political history. It seemed like everyone was against him, all up in arms: the media, the political establishment, Democratic governors, the sitting president, the rating agencies and wealthy donors.

But the slander, the attacks, and the dirt did not stop him. The voters believed him. He won. But immediately after getting into the Oval Office he faced problems that were much more serious than the ones that he overcame during the presidential race.

During the election, he fought the political establishment in the open, in public. One way or another, every twist and turn in this struggle became known to the voters, on whom, strictly speaking, the outcome of the battle depended. And when the mainstream media lied or ignored Trump, the alternative media and social networks came to his aid.

Whatever may be said about American democracy and its electoral system — for which, no doubt, the past political season has been a serious challenge — they have shown to be reliable. The Big Donald was not robbed of his victory. The votes were counted, the vast majority of the electors fulfilled their constitutional duty, and the Senate followed the established procedure strictly.

So now Donald is President. Today there is no one in the world with more formal power than Trump. But this is the moment when his real troubles begin.

With his experience in corporate management (successful enough, by the way), one might have expected that the newly elected president, upon becoming master of the White House, would have full control over the state and its resources — of course, within the law and in accordance with the principle of the separation of powers.

If a lawful order is given, it will be executed. If a decree is signed, it will be put into effect and actions will be taken accordingly. If something is forbidden or unlawful, subordinates and “subcontractors” will not do it.

But it turns out that the state machinery doesn’t work. More precisely, it doesn’t always work.

Literally from his first days in office, Big Donald was faced with almost blatant sabotage by civil servants, judicial obstructionism, and secret opposition from the intelligence services. In the meantime, the attacks from the opposition in Congress and from the press didn’t stop, but rather intensified. Previously they called him a “bad candidate,” and now they are actually calling him a traitor.

Trump’s foes haven’t come up with anything new. They kept repeating the theme of “ties to Russia,” without any particular creativity. But if Donald could simply shrug off the accusations while he was a candidate and almost gracefully repel any attack with a couple of tweets, as the current President he has to take into account the rules of the game. No, not the official rules of the game established by the Constitution on the basis of the social contract, but rules that are informal, extra-legal, and that no one has spelled out, but which are no less strict and rigid.

Trump has not violated any law, has not exceeded his authority or encroached on the holy of holies — the separation of powers — but he has already garnered the charges of “authoritarianism” and even “illegitimacy”.

The president doesn’t even have any special leverage over the Congress — which almost every American leader uses when his party holds the majority in both houses. On the contrary, he is making deals with lawmakers and praising them. Again and again he has praised, and made a deal. It was Barack Obama, in 2009–10, who acted brazenly when it was his turn.

And if anyone has exceeded their authority, it is the judges in Seattle and San Francisco, when they suspended his immigration decree. This, in fact, was a case of everyday conspiracy. The lawsuit was filed in Seattle so that the appeal went to San Francisco, where the most liberal judges in the United States work. And it was a highly politicized decision. But to over-rule it, one has to apply to the Supreme Court. And that takes time. And while the lawyers are working away, it can be said that Trump failed with his first major act. And the press is happy to harp on that.

As for National Security Adviser Michael Flynn, the case against him is all built on “violations of the law.” While he was a member of the transitional administration, in December, Flynn had every right to talk to anyone he wanted to, including representatives of foreign powers, and discuss with them everything he considered necessary.

But did the intelligence services have the right to listen in on him? Was there a valid warrant or order, if not for an actual wiretap (theoretically, it could have been directed not at Flynn, but the Russian Ambassador Kislyak), for them to open a case? And if so, in reference to what? And even if everything is aboveboard, here, still no one had the right to disclose the details of the wiretap to the press. It turns out that those who should be sitting in jail for violating the national security law remain “unnamed sources,” while the honored general and patriot Michael Flynn is considered a traitor.

Unfortunately, I think Trump will have to give in to the establishment sooner or later or he will be killed in the next couple of months. I hope neither will happen and he can “dry the swamp” but he got a hell of a lot work to do. Stay safe Donald.

He is the oldest president in history. He knows he will be dead soon either from old age or from being killed. He wants to leave a lasting legacy of being a “great” like Benjamin Franklin or George Washington or Andrew Jackson. He wants to do the right thing, partially to go down in history as a hero for all except the establishment. Trump will continue to do the right things for a myriad of reasons. And he would rather be assassinated and go in a legacy such as JFK, then live a couple more months and die of a heart attack. This is how it has seemed to me the whole time anyway. Remember that time he was on stage and it looked like someone was going to assassinate him? He just dogged the guy and stared him down. Like he was ready to become a martyr and everlastingly famous.

SPQR : I believe he knows he is looking at slim odds of living . As an American , and a human of just regular morality , he can feel the “Dark Force” presently in power in DC. Now that his AG is finally in place , he can begin to charge those whose have been the most traitorous . I would guess he will start with the Clinton Foundation , and Huma Abedin of the Muslim Sisterhood . John Brennan past director of the “permanent state” , will be much more difficult and treacherous . According to Steve Pieczenik , of the company , Obama was originally a company “asset” , maybe Hillary’s trial will break the truth free . Separating the wheat from the chaff will not be easy . In the mean time , if he keeps us from war with Russia , China , and Iran/Syria he will give us all a chance at life . A Big Cheers to all.