The photos show a dummy soldier that was placed inside an SUV a few meters away from the Israeli military position in al-Mutallah. Shoeib said that the SUV has been parked in the same exact spot for more than two days now.

Most likely, the Israeli military believed that it would be able to provoke a Hezbollah shot at this dummy target, film this incident and then use it to justify agression against Lebanon. 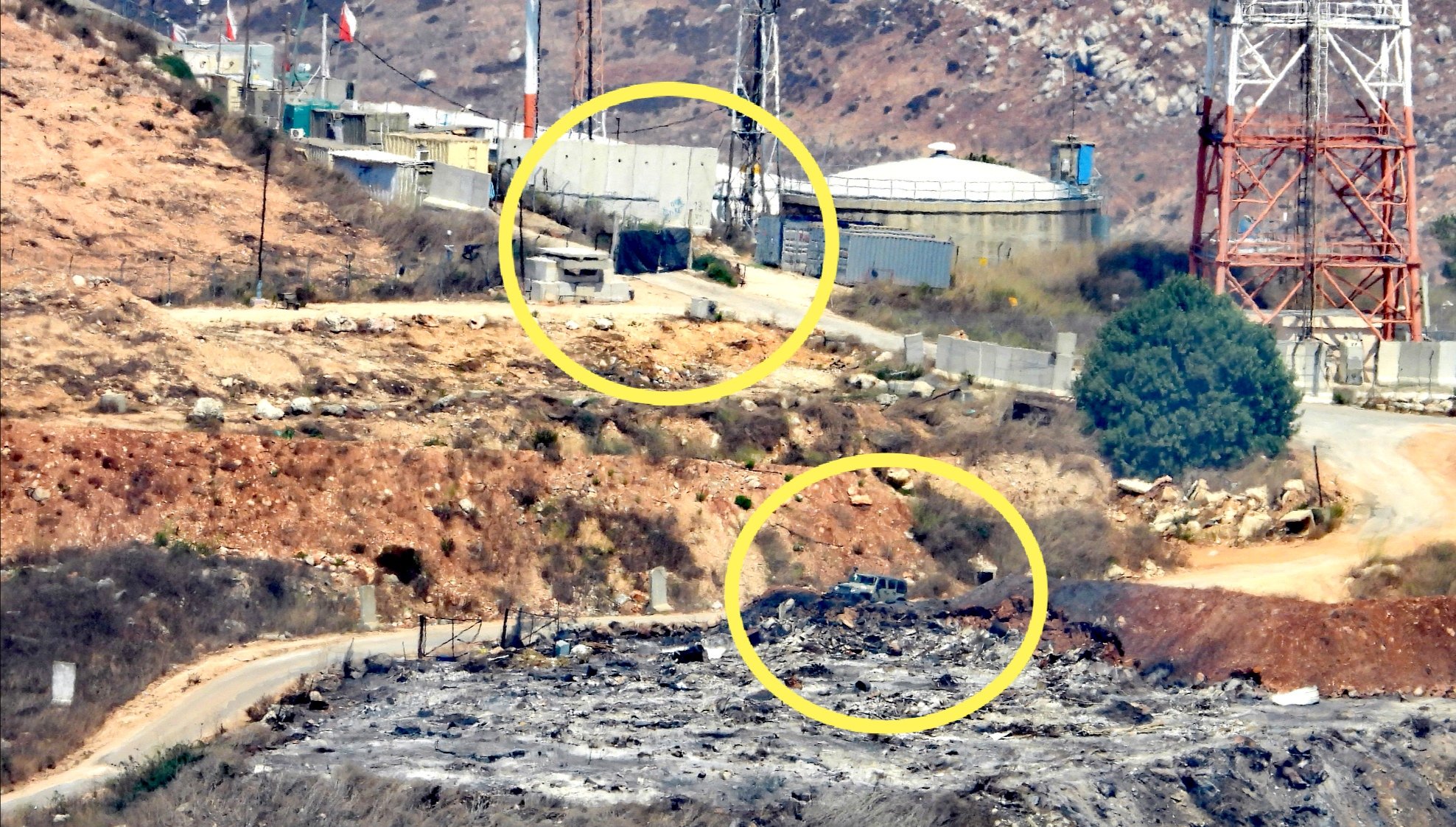 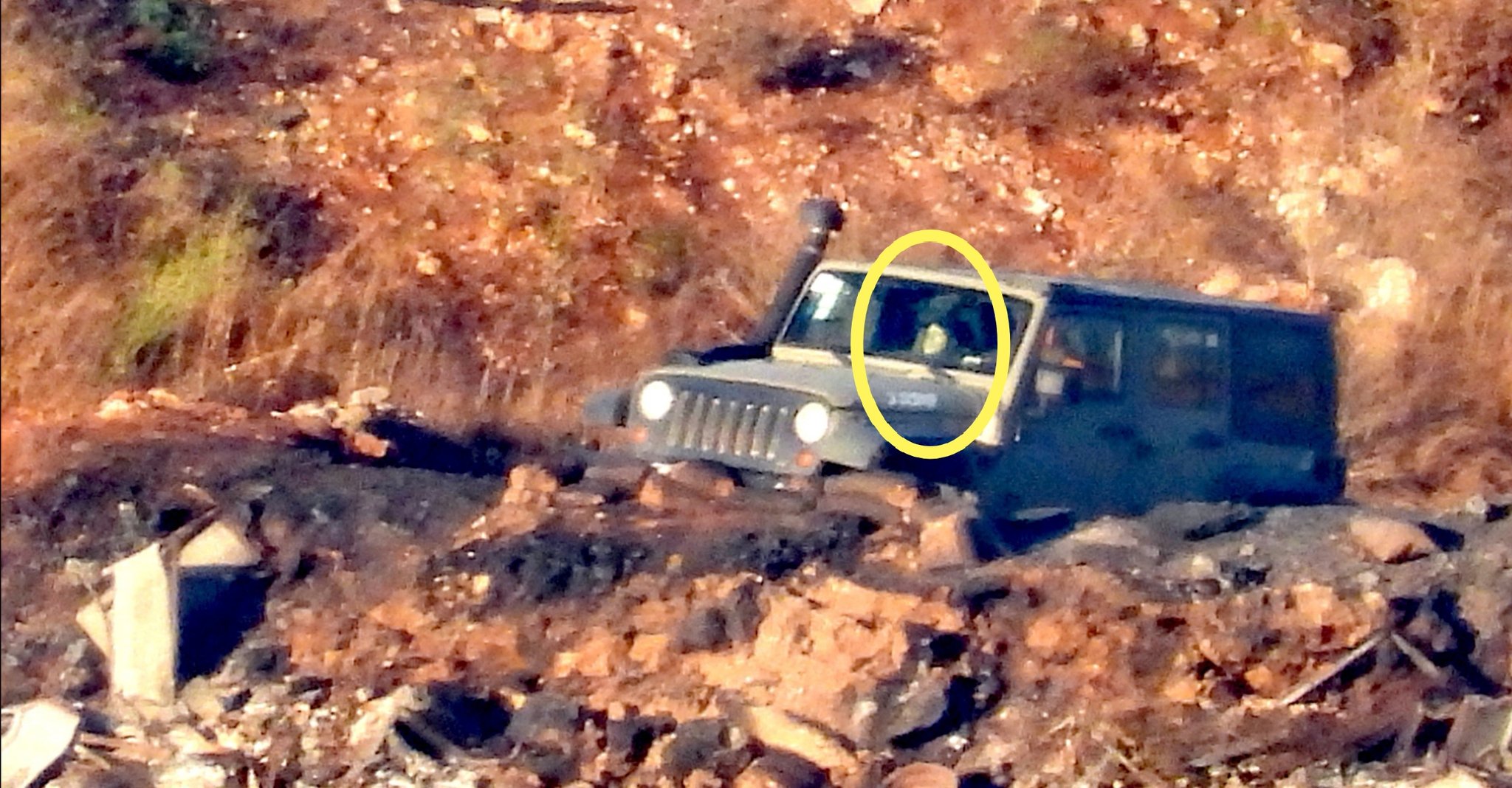 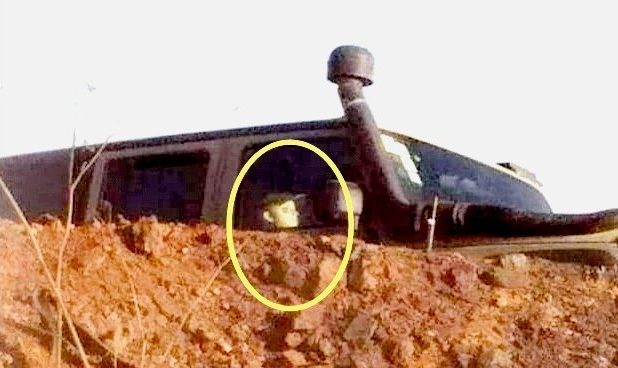 The Israeli trap was widely mocked by Lebanese people on social media with some calling it “stupid” and others seeing it as a sign of an Israeli panic following the recent threat by Hezbollah.

“This scandal is enough to bring down big heads in your [Israeli] army as it shows stupidity and foolishness,” Shoeib said on Twitter.

The Israeli military deployed additional Iron Dome anti-rocket systems in the northern part of the country and placed its troops there on high alert earlier this week following a direct threat from Hezbollah Secretary-General Hassan Nasrallah.

The Lebanese leader vowed to respond to an Israeli drone attack which targeted a media center of the part in Beirut’s Southern Suburb last week, as well as to Israeli airstrikes on the Syrian capital, Damascus, which killed two Hezbollah fighters.

I was looking for a copy on Joohoo… maybe on Joogle.

Zionist scum are overrated as their enemies so far have failed to fight back. These ashkeNAZI vermin have no connection to Palestine or the region and so far have only survived by exploiting Arab internecine conflicts, primitive sectarianism and tribalism. The Zionist savages simply do not have the strategic mass or the ability to absorb sustained casualties in a long war of attrition. These silly dummy tactics shows how scared and desperate they really are. Hezbollah should keep them guessing and wasting resources in a long stand off. BTW, the Zionists are flying Iranian flags near the Metulla fence :) have a closer look. It is the Iranian tri-color.

The nose isn’t quite right.

or the pale white complexion. These dummies are more suited for Nordic nations.

Hey! We don’t want them so don’t get any ideas!

LOL. Had me fooled.

When my kids were young, they made better and more realistic looking Airfix models. The Zionist scared shitless scum must have hired retarded dummies to make dummies :)

BEIRUT, LEBANON (11:20 A.M.) – In a major development in northern Yemen, the UAE-backed Southern Movement has withdrawn from the Saudi-led battle against the Ansarallah forces in the Sanaa, Marib, Jizan, and Hajjah governorates. According to reports from northern Yemen, the Southern Movement made the decision to withdraw from this battle after Saudi-backed Islah forces captured Aden city in the southern part of the city on Wednesday.

Prior to the capture of Aden by the Islah forces, the Southern Movement had taken control of the city after a few days of fighting. The Islah Party (var. Al-Tajma’ Al-Yemeni Al-Islah) has been one of the main forces fighting the Ansarallah troops in northern Yemen; however, the Southern Movement has been providing much needed reinforcements to a number of fronts in this region of the country. For the Ansarallah forces, this could be a turning point in several battles in northern Yemen, including the ongoing fight for the Nihm District of eastern Sana’a.

The secessionist Southern Movement has only withdrawn from ‘North Yemen’ governorates to go back south and fight there against the Saudis/Hadi-loyalists. Good because it takes pressure off the Houthis in those governorates for now, but bad because the this is the UAE plan to partition Yemen. The Saudis found out the UAE was really behind the earlier Southern Movement rebellion and wants the UAE to leave Yemen. UAE wants their war booty and they’re not going anywhere.

Maybe 10,000 Saudis + mercs in Yemen, and same for the UAE + mercs (both mostly use Sudanese). Scale tips in UAE favor when you add the Southern Movement and all the tribal and regional Security Belt militias the UAE organized and armed. In any case, earlier reports of the UAE withdrawing from Yemen are false. UAE-backed forces (Southern Movement) and their advisors are just relocating to the south. Related: UAE jets from Socotra Island just bombed Hadi-loyalist troops, who just took back Aden (for now) from the Southern Movement.

Hezbollah are wrong! That is a real Israeli puppet soldier

“Wait a minute, look at the nose. CAN’T be a real Israeli”

… a proxy American dummy soldier… I think I should be offended…

As I have repeatedly said, the Zionist scum are cowards and all hot air. They are the most scared of death than anyone I have ever know. The Jew basically is a sewer rat historically and his whole miserable existence lies in deceit, cheating and exploiting others. The problem that Arabs, Iran and Hezbollah have created for themselves is to give the Zionist vermin too much credence and not retaliating immediately after repeated acts of aggression. The Iranian mullahs are largely uneducated and their only interest is to hang on to power. Hezbollah is surrounded by enemies like the Maronite Zionist arsekissers and Hariri type Wahhabis in the Tripoli region. Take it from someone who knows the Lebanese pathwork better than most, Hezbollah should not retaliate from Lebanon, as there are various other avenues available over time. Basic military operational strategy is to never announce your plans until they have been executed. Hezbollah should play the long attrition game and keep the Zionist scum mobilized and scared and in the meantime create alliances with Hamas and other Palestinian and resistance groups. Arabs need to get over their petty tribal sectarian differences.

Hariri is not a Wahhabi, buddy. There are NO Wahhabis in Lebanon.

You are obviously not familiar with Lebanon, the Saudi funded Salafists/Wahhabi have a very strong presence in the north around Tripoli. The junior Saudi owned pimp Saad Hariri and his even bigger pimp father were stuck up the Saudi arse all their lives. Rafic Hariri even supported the Zionist invasions of Lebanon.As the Saudi funded Wahhabi Salafism grows in Lebanon, it is increasingly dividing the Sunni Muslim community and diluting its communal power. During Syria’s 2012 battle of al-Qusayr, for example, several activist Wahhabi scholars issued fatwas stating that jihad in Syria is an Islamic obligation.

Thank you. I just try to educate some of these well meaning excitable kids who have no real practical knowledge. Mr. Hamzah you are a educated man by the looks of it. The Saudi scum and UAE are both competing for spreading Wahhabi evil doctrine of intolerance in the region. The UAE pimps even bombed the Saudis in Yemen today using the airbase in occupied Socotra island to bomb mainland Yemen.

The United Arab Emirates’ occupation of the strategic Yemeni island of Socotra is clear evidence it is seeking to reinforce its political clout in Yemen and ultimately further afield with assistance from UK and France which extended the runway to 1500 meters to allow UAE to deploy F-16 and Mirage 2000 fighters to bomb Yemen.Their British and French masters also have troops on the once peaceful island now.

Yemen’s four-year-long war has not devastated Socotra, but the Saudis will now attack the UAE forces there as they have elsewhere in the country. The island is relatively peaceful – 220 miles away from mainland Yemen, and is a UNESCO-protected site. It’s often called the Galapagos of the Indian Ocean, and hosts around 800 rare animal and plant species.

What a bunch of nonsences from you. That must be some other Lebanon. From now on you and your comments are ignored. And very soon you are gonna be blocked.

He is DEEP in debt by the Saudis. Billions deep. He is a mere puppet. Aint no secret..

If you have said millions, I’d be kinda believing you, this nonsence I do not wanna even take as serious. Everybody talks, but no one have credible evidence. He is in good relations with Hezbollah, and this isn’t a secret. Everyone knows that.

”By the way of deception…”

Entity which was made by terror ( Irgun, Stern gang etc) and was run by the same people is rogue entity. Israel will always be what it always was, terrorist project which promotes terror all across the world. Just look up 2001 Mexican parliament attack and everything which followed 911. Then do older search of terrorist acts of Zionist terrorists in Europe around 1950’s, 1960’s where even Belgium was targeted. Their atrocities in Lebanon and their conduct with terrorists from Syria. Takeover of Sinai (over 15 years of extracting oil free of charge, contrary to international law about occupation)… From every angle, they are sick terrorists however you look at it. There is even connection with economy aspect which made it possible for Amazon forests to burn so hard (look Brazilian president connections). Not to mention disgrace of relationship with South African apartheid regime (similar to Rhodesia relationship with South Africa). Research people, knowledge doesn’t hurt. As long as Israeli criminals are not brought to justice world will not have peace. Israel has right to exist but only if they learn to behave like responsible nation and let the people make new government free of terrorists! If not i expect them to be eradicated in next few years, mark my words they are suicidal now.

Only problem and reason that they can do what they do is that truth is not important and that governments are bought by money and threats. I blame sellouts more than Zionists because without those corrupt Zionist ass lickers Israel would not be able to accomplish so much terror.

THey should respond with dummies of their own.

The dummy settler soldier won’t piss his pants, unlike the real IDF cowards.

LMAO joke of the day there bud well done.

They didn’t put diapers on those dummies, that’s not going to fool Hezbollah.

These punks who came up with this must be utterly stupid. But, this is laughable! Humorous…

The Zionist ground forces are in very poor shape as the reservists are scared of war. Even a Pentagon DIA assessment gave them poor marks for combat readiness as only 60% of the equipment is operational and the reserves are ill-trained and unfit to fight a real war as they have been beating up unarmed Palestinian women and children for decades. Zionists run on bluff and unfortunately no one has call their bluff yet.

In a classified document written by the US DIA and later confirmed by Maj. Gen. Yair Golan warns of ‘irreversible damage’ caused by the IDF high command’s involvement in civil suppression in occupied Palestinian territories and lack of focus on combat training. The training and competence of IDF recruits and reservists is very poor and their policing role in occupied territories has eroded their professionalism. Senior officers in the IDF’s top brass have warned that the Ground Forces are not adequately ready for war, and that the General Staff’s lack of confidence in the Ground Forces stands to perpetuate the situation.

The dummy had more balls than IOF rats!

Obvious trap is to provoke a response, if the bait was taken – the occupiers of Palestine would use such an event to ”justify” a violent military response claiming that the other side caused it.

To their credit – they did not fall for the trap and did well to have exposed it.

they are all dummies.