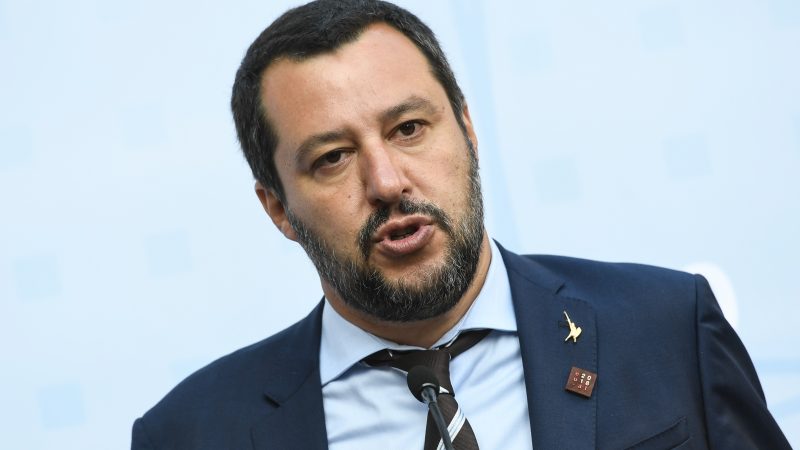 On July 30th, Italy’s Deputy Prime Minister Matteo Salvini said that Italy is “UK’s friend” and wishes for it to leave the EU with a good Brexit deal and stand up to the Union.

Deputy Prime Minister and Minister of Interior Matteo Salvini, who is a right-wing Eurosceptic populist and the Federal Secretary of Lega Nord, spoke in favor of Brexit, as British Prime Minister Theresa May is attempting to gather support from the 27 EU members for her Brexit plan outlined in Chequers. He also said regarding Brexit: “I remember the referendum stage as an example of participation and freedom; I hope it can be an opportunity for the British.”

May, in the meantime, has sent members of her cabinet across Europe to find support for her Chequers deal. This is an attempt to bypass the EU Commission by dealing directly with European leaders, however, as reported by the Express she has met with those that support the Union’s position.

Mr. Salvini, however, seems to support the British Prime Minister and has said that Italy would be UK’s friend in negotiations.

Speaking to the Sunday Times, Salvini said: “My experience in the European parliament tells me you either impose yourself or they swindle you.” Warning May that she should take a tough stance during negotiations. Mr Salvini also accused the EU of trying to punish the UK for voting to leave the bloc, saying: “There is no objectivity or good faith from the European side.”

Mateo Salvini is also active on social media with his calls to deport illegal immigrants.

Italy, which recently held early elections, set a precedent in which two Eurosceptic parties – the Five Star Movement (M5S) and the Lega Nord – won a parliamentary majority between them.

On May 28th, after Italy’s longest post-war period without a government, President Sergio Mattarella decided to veto the populist coalition from taking office and appointed Carlo Cottarelli, a former International Monetary Fund official, as interim prime minister. The President took did so on the grounds that economic stability would be threatened by the parties’ proposed finance minister, Paolo Savona, who refused to renounce his long-standing opposition to the euro.

Neither winning party campaigned a leave of the Eurozone, and Mr. Mattarella did a favor to the right-wing populist parties with his reckless decision. The EU budget commissioner Günther Oettinger showed a similar recklessness after declaring that “the markets will teach the Italians to vote for the right thing.”

Carlo Cottarelli was to propose his lift of ministers on May 29th, however, he only held unofficial consultations on May 289h and 30th. Meanwhile, Salvini and Di Maio announced their willingness to restart the negotiations to form a political government. Despite, Mattarella’s intervention, M5S and Lega Nord, on May 31st, agreed to forming a new government without Paolo Savona as Minister of European Affairs, with Giuseppe Conte as Prime Minister of Italy.

Most of the Italian public still supports EU membership there is still a possibility of Italy – one of the founding members of the Union and the world’s eighth-largest economy could leave the single currency. The current political extremism in Italy has been caused by the Eurozone’s instability due to it being a monetary union that is not matched by fiscal and political union.

The Five Star Movement and the Lega Nord have made grand promises in their campaign. With Five Star promising a monthly basic income of 780 euros for those living in poverty. The Lega Nord, in regard to flat tax, is promising The League also proposes a tax exemption of 3,000 euros per individual in each household, including children, before the flat tax is applied.

In an interview published in Corriere della Sera on July 29th, Italy’s Deputy PM and leader of the 5-Star Movement Luigi Di Maio noted that an Italian referendum to quit the Euro is not in the governing coalition’s contract. His comments come after Beppe Grillo, the Five Star founder’s comments that Italy should have a “plan B” to quit the Eurozone if economic conditions dictated and that Italians should vote in a referendum to see if a majority wanted to quit the currency.

On July 30th, the WSJ reported that Italy is prepared to reject the trade deal between the European Union and Canada. On July 13th, the 5 Star Movement’s leader Luigi di Maio at a meeting of Italian farmers’ association Coldiretti, which has campaigned fiercely against the EU-Canada Comprehensive Economic and Trade Agreement (CETA) said “The narrative goes that if you look after Italian products on markets, if you try to defend a sector, you are populist, anti-European and anti-West, Other countries do their job. It is we who have to defend Italy and the Italian economy.”

EU data, according to WSJ, showed that Italy is already benefitting from CETA. Italian exports of food and livestock to Canada have fared even better, growing by 12%, while over-all export has gone up by 2% during the eight months of provision effect of the deal.

The right-wing populist government of Italy has made big promises before the election and has made controversial and populist statements since the forming of the government with Giuseppe Conte as Prime Minister, however no actual radical actions have been undertaken.

The Lega Nord is a racist neo-nazis organization that demolishes homes of the Roma living in Italy, like the jews demolish the homes of Palestinians, and then separate families of Roma like Trump is doing to Latin Americans living in the States. They even went as far as demanding legislation barring Southern Italians moving to Northern Italy because Southern Italians are “not white enough” and do not act like Northern Italians. The demand is that Southern Italians should be racist to everyone who is not a Celt and hate themselves.

That is the Lega Nord. Racist. Neo-nazis. Evil. And like Hitler, picks out who are human in Europe and who are not.

Nazism is a form of extreme right wing politics and related to fascism. Not every racist however is a neo-nazi. And the incorrect use of the term is a tactic meant to demonize the other and tarnish them into isolation. But the incorrect use over a prolonged term also serves to make it meaningless, like the boy who cried wolf all the time. As people become desensitized to it its power wanes to the point that when the genuine article does arise nobody will give a shit.

That is as if history were to repeat itself. Which contrary to popular belief it NEVER does. Every historical event is unique in its own right and the false use of historical analogy has caused more harm then good as people only focus on the analogy parts, but never on the far more numerous parts where they differ.

You don’t know the italian situation ;-)

So please spare me your neo liberal claptrap and instead go and live with these people or better still , go amongst them with valuables and count the minutes to being attacked and robbed.

Bullshit it’s because of all these Africans washing up on the shores of Europe left and right that are functionally retarded. All they know is gimme gimme gimme and rape rape rape. And yet everyone must pretend that once they land on the magic dirt of Europe, they will become law-abiding and contribute to the society culturally and economically. LOL good luck with that, a piker’s dream. They are good at dealing drugs and stealing, like they are anyplace else. Criminal cretins fleeing their own countries they are too stupid to fix so they can get to Europe, fuck the white women and live on welfare.

That is an inconvenient truth that is manifestly True all the same. :)