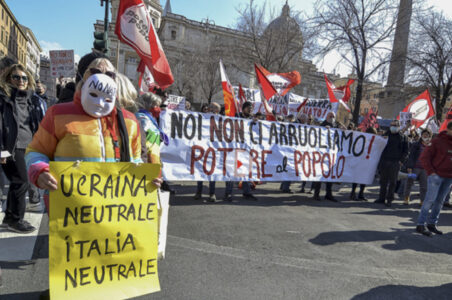 Ensure the health of Calabrian citizens and supply arms to Ukraine. All in one law. This is how politics is done in Italy. When there is a goal to be achieved and a provision must be voted on, a single cauldron is created for the parliamentarians to vote on. Life and death seamless.

Someone had deluded himself that with the passage of the leadership of the Italian government from the hands of Mario Draghi to those of Giorgia Meloni the vision of the conflict in Ukraine could change. In reality, there has been a change: the new far-right government in Italy immediately made clear its total adherence to Foggy Bottom’s diktats. If you happen to pass by Rome these days, don’t try to recite article 11 of the Italian Constitution: “Italy repudiates war as an instrument of offense to the freedom of other peoples and as a means of settling international disputes”. It is waste paper, because the only way to resolve the conflict imagined by our heroes is to continue supplying Bankova with weapons.

Thus, while European and international diplomacy is taking its first steps towards reaching a negotiating table, the Italian government has no doubts: we must continue to supply arms to Ukraine until the end of 2023.

At a certain point in the parliamentary discussion, someone doubted that presenting a law that talks about health care in Southern Italy and weapons for Ukraine was a bit surreal. Thus the part concerning the military budget for Kiev was canceled from that “oxymoron” law. Has Italy changed its mind and focuses on diplomacy? Wrong answer. Another law document approved by the government and green light for the supply of arms for the whole of 2023.

To date, Italy has spent almost half a billion euros to supply Kiev. But it is an estimate that could grow because yesterday’s and today’s governments have decided to keep the quantity and quality of supplies guaranteed to AFU a state secret. But nothing is destined to remain secret in Italy.

Thus it is possible to make an estimate of the material sent to the front. Among the weapons that Italy has donated to Ukraine there are some of the most modern equipment available to our army and NATO. These would also include the MLRS, long-range weapons. The self-propelled MLRS, updated versions of the American Himars, which can carry 12 rockets with GPS satellite guidance and a range of 70 kilometers moving on a tracked and armored vehicle. Italy, which has 18 MLRS, has donated 2 to Kiev. For Dmitry Medvedev that type of armament represents: «The fastest way to make the conflict in Ukraine degenerate to the irreversible consequences of a world war is to supply MLRS long-range weapons to the psychopaths of Kiev».

Together with the MLRS, Italy would also send the PZH2000, self-propelled howitzers which have a self-loading 155 mm cannon and computerized firing direction, capable of hitting targets up to 40 kilometers away (which reach 70, if loaded with special ammunition) firing twenty shells in three minutes. Of the 68 PZH2000 that our country has, 6 will be sent to Kiev.

Italy has also made available older heavy weapons, such as twenty or thirty (the number is not known with certainty) M109L self-propelled guns. Also in this case we are dealing with armored tracks with 155 mm cannons. M113 troop transport vehicles, Fh70 howitzers, Lince armored off-road vehicles, 120 mm mortars and heavy and light machine guns (the latter donated at the end of spring) must also be added to the material list.

Now Italy supplements its supply by donating missiles to Kiev as well. These are the “Aspide”, old generation surface-to-air missiles, which our Air Force took out of service last year. For Kiev they are precious weapons, because they will go to reinforce the anti-aircraft now one step away from collapse and the Aspides are considered very accurate. The hypothesis of the Italian government is to donate four complete radar batteries, each with 18 missiles: the range of action is twenty kilometers, parameters sufficient according to NATO experts to protect a city from Russian drones and cruisers.

The bill for the material sent, as mentioned, comes close to half a billion euros. But as always happens in Italy there is a surprise. The laws that allowed the transfer of armaments to Kiev stipulate that the Italian Ministry of Defense must replenish its arsenals with weapon systems comparable to those sent to Ukraine. “New” pieces will be needed at a list cost certainly higher than the declared value of what was sent to Ukraine, after all warehouse residues or little more. A big deal for the gun lobby. Such a complicated maneuver must be entrusted to those who know the world of weapons well. This is how Guido Crosetto arrived at the Italian Ministry of Defence: for years he was the head of Aiad, the Italian federation of manufacturers in the defense and aerospace fields.

Italy was one of the EU motors for covid scamdemic so it is no wonder those holding power in Italy, Mafia in fact, are pushing for USA agenda since USA gave them Italy as a reward after WWII. As far as I know, at least Mussolini cleaned Italy of Mafia. It returned with USA and kept the power ever since.

Peppe il Sicario
Reply to  EU must not be USA slave

Bravo! There are some people who understand who really controls things at certain levels. The organized crime families of the South, Sicilian mafia, Calabrese ‘Ndragheta, Neapolitan Camorra, Apulian Sacra Corona Unita and their affiliates in the north are those who truly run Italy with the silent consent and authorization of the Vatican, the Cupola, the biggest Mafia organization on the planet!!! The Americans, on their behalf, are the biggest vile scum along with their British cousins, will all go down in a ball of flame for their perfidy, treachery and crimes against humanity!!! Mussolini, like him or not, even with all his mistakes, was able to weaken the mafias in Italy to a point that no one has been ablet to since.

Even Italy is impoverished by the usurers who rule the West. And the patriotic Italian government can’t do much today. But I foresee a general deterioration of the EU and the USA, thanks to the Russian Struggle against the forces of evil. And so things are going to be very bad for the whole West. Thanks to God.

Meloni is a stooge of the US Globalists. She is a member of the USA’s Aspen Institute in New York and would be picking arugula(US) or rocket salad(GB) in the fields if she hadn’t cozied up to them and had their backing. Her right-hand party man, Guido Crossetto, who bears an uncanny resemblance to Uncle Fester in the Addams Family, is Minister of Defense and has massive ties to Italian Defense companies. He has been the biggest anti-Russian, pro-Nato puppet since the opening of hostilities. Elections, as should well be clear now, are rigged, an enormous illusion of massonic “demonocracy.”

All the forces of evil are losing and dying. Whether Meloni is sold or not, together with others from his government, it’s not like she can save an already dying America. America is finished, hated by all.

Who cares? Not Russia. If Russia cared, it would declare war on Italy refuses to import any of its goods and stop all energy exports.

Damn silly comment. Bit like a dumb child rooting for one or other team. No logic. No reference to factual ino. No sense.

Russia will be smashed by West using Ukies as suitable tool. Slavs killing each others. Enjoy your war.

In a parallel world : Russia will smash the West using WEF agenda using Europeans as a suitable tool. Europeans starving and killing each other for survival. Enjoy your pain,

Over 35% of Italians, a whopping number, didn’t vote in the last national political elections in September to tell the scums in power, “we know everything is rigged.” The Pope of Poop and the vile Vatican are the main puppeteers! Unfortunately, the majority of Italians like ALL westerners have been narcotized to the point where government propaganda reigns free to control and coerce. I don’t see any “brave” westerners anywhere. Where are all those brave Americants with all their guns, for example????????? Taking a dick up their a$$!!!

So Italy has also taken an agressive stance towards Russia. Turkey said it’s working on a “dignified” way out for the warring parties (Russia and Ukraine). But it seems the West isn’t interested in ending the war yet. I get the feeling they are trying to get Russia to unleash its full military power to make crisis bigger with greater consequences for the Russian nation. If this is the end goal for the West, Putin should end the Ukraine war asap even if it means losing face. Not winning after 10 months of fighting is already an embarrassment.

Carlo
Reply to  The Objective

kotromanic
Reply to  The Objective

If Putin leaves ukraine now ukraine wont stop the war cause why stop if you are “winning”. Highmars shooting as core russian cities will be the new normal then.

Italy is giving away their old Aspide SAMs, but the other day signed the official procurement contract for the production of the CAMM-ER missile, their replacement!!!!! The arms makers are happy and so are the banksters and private equity hyenas who invest in them.

So it seems this news of arms for Ukraine could be a PR stunt. Maybe to quiet things down after Meloni’s recent truth bombs and to let the EU know they are still onside. For how long is not yet known. Perhaps these arms won’t even make it to Ukraine as a lot of the donated weapons are beginning to appear in Africa.

The people are being ignored on everything from ‘global warming’ to injecting kids with poison. The current batch of NWO politicians aren’t listening to the people because they have their own plans. Plans that will lead those who follow into another human catastrophe.