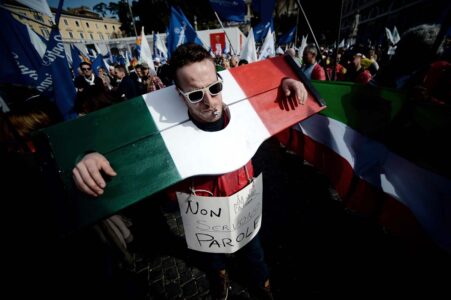 The stars say it. Thus, if anyone believes in astrology, he will cry out his anger against Pluto for the dramatic fate reserved for Italy. But also the economic analysts say it, Italy is dangerously close to an economic and social crisis that could jeopardize the country’s institutional stability. After having been the European border line for the entry of the Covid pandemic, Italy is now dealing with an economic and social crisis that puts the unity of the country at risk. The policy of sanctions against Russia which quickly turned into a boomerang is being paid dearly. The costs of energy and gas have skyrocketed, complicating the accounts of the national government. But also of families and business companies.

Being Washington’s most loyal partner comes at a steep price. A price that even the new far-right government, led by Giorgia Meloni (heir to the post-fascist political tradition) seems willing to pay. Italy followed Biden’s orders to the letter, stood in the front line against Russia, renounced energy supplies from Eastern Europe, anxiously awaiting LNG gas from the United States. It never arrived and it will never arrive, because in Italy you can count on the fingers of one hand the regasification terminals capable of transforming and then putting the stars and stripes liquefied gas into the network. It was a bluff, first signed by the technical government entrusted to Mario Draghi, who ran away as soon as the pillars of the country started to wobble. Now, however, the knots are coming home to roost and the bills have to start paying. Until a few months ago, growth estimates indicated a plus 6 percent for the Italian gross domestic product. A good rebound which in any case must be calculated taking into account the contractions suffered in the Covid years.

The truth for Rome and its surroundings is however different. The Italian economy will grow by 3.2% in 2022, while in 2023 the figure will contract by 0.2%. It’s called a recession: and it’s ratified for Italy by the analyzes of the International Monetary Fund.

“We expect a technical recession in Italy in the coming quarters mainly due to the impact of the energy crisis, high inflation and falling incomes,” said Petya Koeva Brooks, IMF deputy chief economist.

“Everything will be fine” was the slogan coined by the Italian government in the dramatic days of the pandemic. Now we know that was not the case. And that the worst is yet to come. The mainstream media stacked the cards, instilling confidence in Italy’s economic picture, while all the key economic data turned red.

Now we know that the economic crisis is not a transitory shock and will hit Italy and Europe hard in the coming months. Obviously, the pro-Atlantist mantra has attempted to unload the responsibilities of what is happening on Russia and Putin. But it is precisely the analysts of the World Economic Forum who deny this nonsense.

The Italian crisis, “is not only due to the high energy costs caused by the Russian-Ukrainian war, the next two winters will be difficult and that of 2023-2024 will probably be worse”.

In the last two months, even the Italian public opinion – almost always busy discussing nothing, from weapons of mass distraction – has started to feel a shiver down my spine. After years of bonuses, incentives and incomes without working, the new government has changed course. A classic example of how and why economic and social tension can explode in Italy is the so-called “citizenship salary”. It is a free bonus given by the state coffers to those who do not work. It was a rain of money. During Covid he saved millions of families from poverty. In three years, Italy has burned almost 26 billion euros. Prime Minister Giorgia Meloni has announced that this measure will be cut from 2024, but the beneficiaries will be significantly reduced as early as 2023. There is a problem: 76 percent of that money ends up being distributed from Rome down to the poorest part of the country where the unemployment rate is the highest in all of Europe. It is a real powder keg that risks setting off street protests. From Naples to Palermo, people have already protested, recalling the riots of the late 1800s, when the two cities and all of southern Italy were set on fire by popular anger over the rise in bread prices.

By now it is clear to everyone that Northern Italy and Southern Italy are two different countries. And it cannot be ruled out that some guru of Atlanticist geopolitics is aiming for a secession of the country. They already tried it in the early nineties.

Setting aside the spy story scenarios, the dramatic truth is one and only one: the coffers of the Italian state are empty. The government presented the budget maneuver in recent days. It is a maneuver worth 36 billion euros. It seems like a huge figure but in reality they are crumbs for a country that until twenty years ago was the sixth industrial power. But there is still something more serious. In compliance with the dictates of the European Union, the Italian government presented the economic package in Brussels. EU officials have discovered that that document does not have financial coverage for over 16 billion: Italy, in practice, does not explain how it will obtain savings for 10 billion and new income for 6. In short, Italy gives the numbers.

A comment by Christine Lagarde (President of the European Central Bank) arrived shortly after: “in the current context of high inflation, fiscal policy must be careful not to increase inflationary pressures. Budget support should therefore be targeted, personalized and temporary. At the same time, governments should pursue fiscal policies that demonstrate their commitment to gradually reduce high public debt ratios.” A warning of a general nature, but the simultaneity of Lagarde’s recall and the landing in Brussels of the Italian maneuver is a clear and unequivocal indication. On the scenario there is also the hypothesis of a commissioner of the Italian economy by Brussels. For Italy it would be a capitulation. The question remains: could Europe continue to exist with the default of one of its founding countries? The answer is no.

“To be America’s enemy is dangerous, but to be her friend is fatal.” – Henry Kissinger.

When will you stop drinking?

Another well written article by Southfront, addressing an issue (secession in Italy) of which American pseudojournalists are blissfully unaware, and which EUists prefer either to ignore or to pretend will not affect their comfortable status quo. 2050 A.D. is going to be so-o-o interesting

Kev out of Kiev

An imaginary problem, created with the utterance and peddling of an imaginary substance, by criminals who have distorted reality so much with media control, such that people are living in an artifical and imaginary world. How amusing?

The EU has aided and abetted the USA, to destabilize Europe and turn part of it into a war zone. Europeans are suffering economic hardships, they’re apoplectic with rage.

This vile cunt Ursula, the unelected bureaucrat is beyond stupid. It really is time to dismantle the EU, not too late for Germany to restore cordial relations with Russia. Economic union with these two countries will be the powerhouse to restore and kickstart the economies of Europe.

After the Covid 19 pandemic a lot of improvement has been made.

The EU will definitely fall apart and this is because of decades of the mass immigration of people fleeing from US wars of choice.

It’s a replay of all the wars of plunder that were instigated around the globe by the UK for circa 400 years. Especially in Europe during the Hundred Year War. During that war refugees were crisscrossing all over Europe. The Volga region of Russia. These refugees were named as the Volga Germans.

Italy has always been in crisis and can easily survive on spaghetti, pizzas and sardines swallowed down with cheap vino branca. No problem.