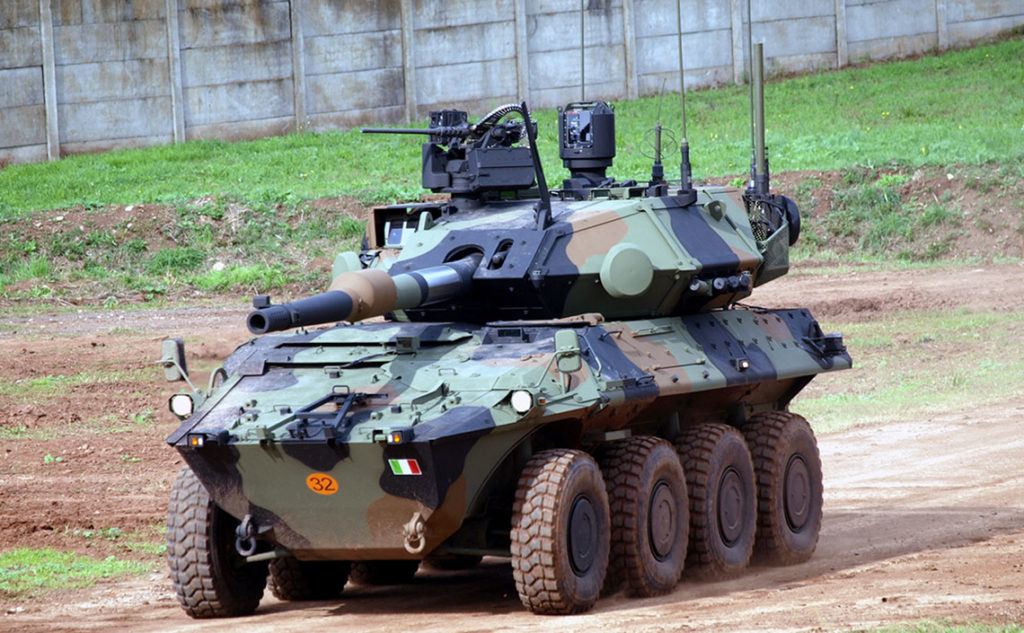 On July 24th, the Italian Ministry of Defense signed the contract for the first 10 Centauro II wheeled tank destroyers from the Iveco Defence Vehicles and Oto Melara Consortium (CIO).

The acquisition of the first 10 vehicles from CIO is worth EUR159 million, including the vehicles, equipment and logistics. It is the first tranche of a planned procurement of 136 Centauro II. Oto Melara, which is now known as Leonardo, owns 50% of the Consortium. The contract value for it is in the amount of approximately EUR92 million.

The signing ceremony took place at Palazzo Guidoni, the headquarters of the Italian Secretariat General of Defence and of the National Armaments Directorate. The Secretary General of Defence and National Armaments Director, Aerial Squadron Marshall Carlo Magrassi, the Italian Army Chief of Staff, General Salvatore Farina, and the Director of the Land Armaments, Lieutenant General Francesco Castrataro were all in attendance, according to Deagel.

The Centauro II, as reported by C4 Defense, has been developed as a battle tank destroyer. It is equipped with a 120 mm 45-caliber smoothbore gun which has muzzle brake that can fire ammunition according to NATO standards. The vehicle has shock-absorption seats, a four-man crew including a commander, gunner, driver and loader. The turret also allows integration of a HITROLE remote-controlled weapon system, suitable for the integration of a 40 mm grenade launcher, 7.62 mm or 12.7 mm machine in place of the on-board board machine gun at the loader’s station. The vehicle also has an automatic fire detection and suppression system. Leonardo is responsible for the complete vehicles’ turret defence system, including observation, targeting and communications systems, whereas Iveco Defence Vehicles is responsible for engines, gears and all the automotive components, the hull and the final integration of wheeled armoured vehicles.

The Centauro II has a gross weight of 30 tonnes, it is equipped with a brand-new Iveco Vector 8V EURO III engine, which delivers over 720 horsepower, meaning it’s combat power to weight ratio is 24 hp/t. It has an automatic gearbox with 7 forward and 1 reverse gears. Furthermore, it uses a 8×8 H-drive architecture with hydro-pneumatic, independent suspension, three steering axles and a central tire pressure digitally controlled system (CTIS). Thus, it offers superior mobility over rough terrain. The Centauro II can travel up to 800 km on road with a top speed of 105 km/h, with a full fuel tank. The three steering axles allow for a turning radius of 9 meters, while the all-wheel drive allows for the crossing of a two-meter wide trench. The vehicle can easily move at a 60% upward and 30% downward slope.

In terms of power, situational awareness, mobility, ergonomics, shooting behavior and communications as well as crew protection the Centauro II is a massive upgrade compared to the Centauro I. According to Europawire it is a latest-generation armored vehicle that can operate in any number of scenarios: from national security missions to peacekeeping and support operations and in other operational theatres in which the Armed Forces need to intervene.

There would be far more ‘bang for the bucks’ if the 16 million Euros per vehicle was spent on many hundreds of the new generation of long range infantry ATGM’s :)

These vehicles are no more that big boys toys that can be easily destroyed in real combat by infantry hunter killer teams.

they are mostly reconaissance vehicles also meant to support fast units flanks or quickly plug holes if needed. Their gun isn’t much against modern tanks but it’s still able to deal with leopard1/t55/m60 etc, and with proper ammunition is still good artillery vs infantry or fortifications.

They compare rather favorably with the US Stryker SPG, and it’s a positive that Italy produces its own equipment rather than buy US one in this field.

And also by helicopters, from 5km distance and 3km height. But well, let em have it.

They will look smart on ‘ chest thumping ‘ parades anyway :)

And much less damaging on the roads during parades.

I suppose in the context of Italy’s enormous debt problem, this is small change.

This looks like an effective weapon for use against Italian civilians during the upcoming food and/or immigration riots.

Remember: Protecting corrupt government leaders is the most important job of the Italian military. They need the proper NATO-standard tools to do their job effectively. Or this happens: https://uploads.disquscdn.com/images/e6f1c58e30d00aefc804c2f8b24aae7bc260f7010fc2b5dd445c900752d76b81.png

The Russian light infantry vehicle like the US Hunvee carry’s 8 Kornet missiles and are vastly better than a gun and probably much less expensive.

Excellent infomercial. Now is it a joke: General Castrataro!

Italian opera used male ‘castrato’ to achieve soprano – via castration prior to puberty. Are they implying the Italian military are imasculated?