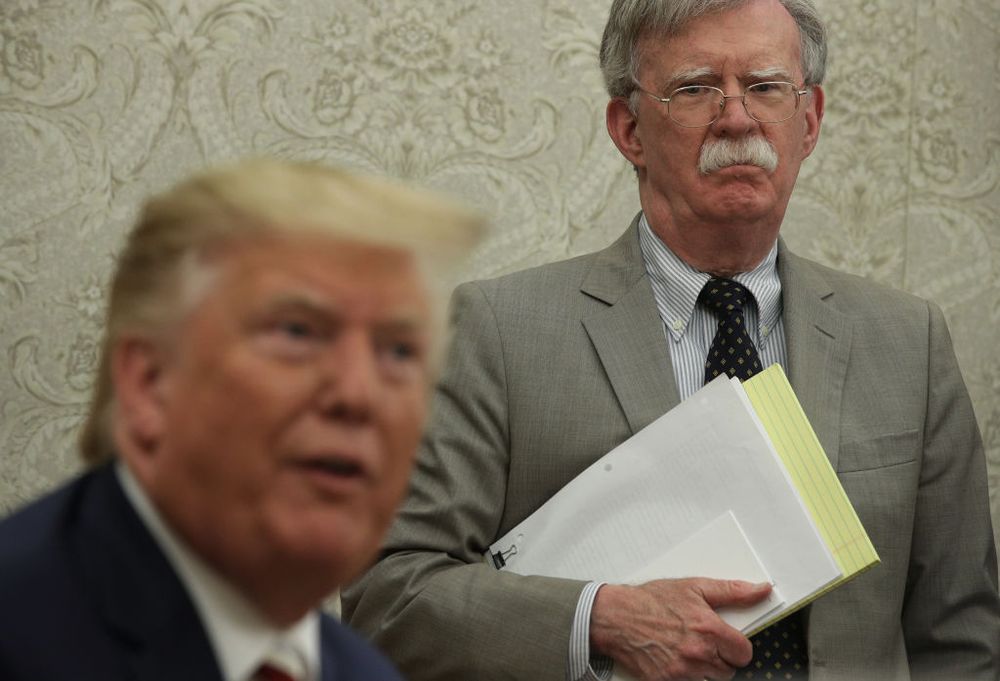 As of June 17th, excerpts of former US National Security Adviser John Bolton’s book “In The Room Where It Happened: A White House Memoir” are appearing online.

.@MarthaRaddatz: “How would you describe Trump's relationship with Vladimir Putin?”

John Bolton: “I think Putin thinks he can play him like a fiddle.”

Watch more from the exclusive interview this Sunday at 9|8c on ABC. pic.twitter.com/VALmx3Z0f0

A more interesting excerpt is one regarding Venezuela. According to Bolton, US President Donald Trump claimed that it would be “cool” to invade Venezuela because the nation was “really part of the United States.”

In 2019, Trump expressed he would consider an outright quarantine or blockade of Venezuela in an effort to force a regime change and remove Venezuelan President Nicolas Maduro from his seat. Something that has been a complete failure, one year later.

As Venezuela faced an economic crash and political turmoil, Maduro has been accused of rigging the country’s presidential elections and is not recognized by the US and many other nations. The US State Department offered a $15 million reward for his arrest.

“We seek a peaceful transition to power,” Trump said in 2019. “But all options are on the table.”

But prior to the entire charade of Venezuela, back in 2018, Trump allegedly asked his aides to explain why the US couldn’t just invade the South American country. The National Security Adviser before Bolton, H.R. McMaster, and others tried to convince Trump that military action was tenuous and unpredictable.

Furthermore, according to the book, Trump kept confusing the current and former presidents of Afghanistan and asked Japanese Prime Minister Shinzo Abe to help him reach an agreement with Iran.

Trump also apparently had quite a close relationship with Chinese President Xi Jinping asking him for help to win the Presidential elections, and discussing amending the US Constitution so he could serve more than two terms.

Bolton alleged that Trump “pleaded” with Xi to buy US agricultural products to help him win reelection this year.

According to the book, President Donald Trump expressed approval of a “concentration camp” for Uighur Muslims in China during a private meeting with Chinese President Xi Jinping.

Reports regarding such “concentration camps” are frequent in MSM, and there are institutions that provide vocal training, as well as general education to individuals at risk of radicalization, but it doesn’t go anywhere near as severe as what a “concentration camp” suggests and China rejects these accusations.

Xi “explained to Trump why he was basically building concentration camps in Xinjiang,” Bolton wrote, citing the interpreter’s account.

The interpreter added that “Trump said that Xi should go ahead with building the camps, which Trump thought was exactly the right thing to do,” according to the book.

Bolton also wrote in the book that Matthew Pottinger, a retired US Marine and the current deputy national security adviser, “told me that Trump said something very similar during his November 2017 trip to China.”

According to Bolton, Trump also wondered why the US was even considering sanctions against China’s treatment of the Uighur over Christmas Dinner 2018.

Just as these excerpts were being released, US President Donald Trump signed a bill specifically condemning these alleged “concentration camps.”

The book is to be released on June 23rd, and there’s a lawsuit against John Bolton not to do so.

The lawsuit against Bolton accuses him of breaking his contract by backing out of the National Security Council’s ongoing vetting process to determine whether Bolton’s book contains classified information that needs to be redacted or edited down.

The NSC “quickly identified significant quantities of classified information that it asked Defendant to remove,” the complaint said. “An iterative process between NSC Staff and Defendant then began, as required by the binding agreements he signed, with changes to the book and other information being securely passed between Defendant and NSC staff. Soon, though, Defendant apparently became dissatisfied at the pace of NSC’s review.”

It alleges that instead of waiting for the process to conclude, Bolton “decided to take matters into his own hands.”

Seriously, this dumbass dotard orange fat old geezer is hilarious and the best thing for the destruction of the Americunt failed state. He is literally tearing the rotten fabric of racist AmeriKKKa apart, even the other fat pimp Pompeo called him a “fucking moron” according to Bolton, who is a mega arsehole himself. The failed US state is a three ring circus. Hope Trump becomes President for Life, I can use the entertainment.

Seems it good idea to elect him again as potus for second time, he gave more destruction to us more than any potus before him

anyone believing a single sentence of Pompeous the pathological liar is simply a moron.

Book is by Bolton and not Pompeo, both are liars.

To all american protesters.

Your ennemy is Bolton! There are hundreds of Bolton types still serving . What a seditious little fucker that one is, this treachery is….infuriating.

Even as he backstabs his former partner in crime he knows that nobody would ever pay money for a book about him if Trump wasn’t in it.

hahahahah omg what a buffoon

Sounds like projection to me, Bolton is the biggest warmongering asshole in Washington. The kind of guy who’s never seen a war didn’t like.

And the bastard found a way to avoid going to Vietnam.

I laugh at the system that allowed such a person, who is at best a dimwit and at worst mentally challenged to be elected. However, he is doing a good job of bringing the down “ghetto on the hill”.

Trump is a parody of the buffoons we already have. Does anyone remember the character ‘Archie Bunker’? Trump is the Archie Bunker of Neocons.

Yours is an interesting perspective but true, sadly. All the front runners on both sides and hundreds of their party members are not any better.

Yes that was a funny TV show back when people’s sensibilities could be offended. A real fine cast of characters: Archie, Edith, the Meathead, Gloria (little girl), Mr. Jefferson, etc. My favorite line from Archie was “SHUT UP YOU!”

Lots of BULLSHIT coming from Bolton.

Watch now as an architect of the Iraq war becomes lionized by the other half of the duopoly, the so-called liberals. Same as Jorge W. Bush…

Democraps, republifucks, different sides of a coin made if shit!!!

Same as all the stinks tanks, like council on foreign relations, the atlantic council ect ect…

Its just a big circle jerk for the elites to stay on top and walk over the working people. Symptoms of turbo capitalism.