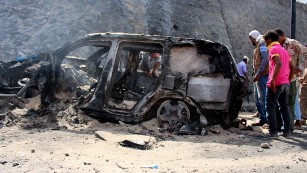 A bomb blast hit the center of Turkey today killing 10 people, most of which were foreigners. Is this the case of don’t bite the hand that is feeding you?

It is no secret Turkey has had a big hand to play in the rise of Daesh, but now that Turkey has been struck will support for the terror group continue or will this be the change that is needed for Turkey to tackle the Daesh threat?. The attack was carried out by a lone suicide bomber, from Syria, Tayyip Erdogan said.

It has been warned that this attack is only the beginning of a campaign, but this is still yet to be seen. Turkish political scientist and counterterrorism expert give the warning in an interview with Sputnik,

“I think that after Tuesday’s attack in Istanbul the international coalition will step up its campaign against Daesh. The explosion on Sultanahmet square is only the beginning and there will be more and more such terrorist attacks coming our way,” he told Radio Sputnik

The blast went off in the Sultanahmet district of Istanbul, it went off close as people congregate close to the Blue Mosque. Turkish authorities have imposed a temporary blanket ban on media reporting about the event.  Moscow based analyst, Igor Nikolaichuk said that there is many people in Turkey with many reasons to launch an attack like this,

“There are many people in Turkey willing to stage a terrorist attack these days. When you have a country just across the border where a civil war has been raging for almost four years now, when you have armed gangs roaming the streets, you just can’t control them. Still, I believe thatTuesday’s attack could have been the work of either Daesh or young Kurdish radicals who accuse their elder comrades of collaborating with Turkey. They are fighting their own war against Turkey” Anatoly el-Murid said.

Involvement in Syria has led to Turkey being targetted by the very same group they are supporting, this mirror image has repeated itself across the middle east. Supporting proxy forces is the name of  the game when it comes to modern warfare.