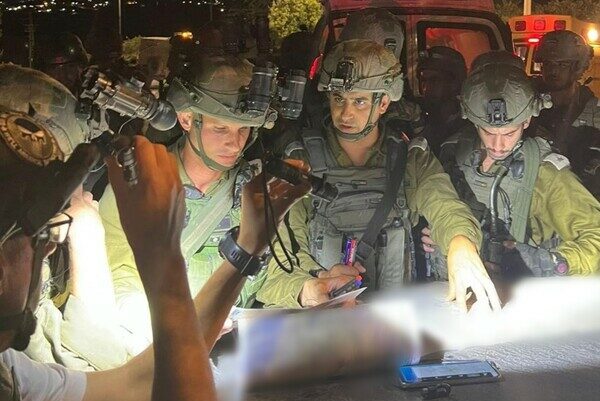 Israeli officers are seen at the scene of a shooting attack, in the southern West Bank settlement of Carmel. Source: the Israeli Defense Forces.

Late on September 15, an Israeli man was wounded as a result of a shooting attack that took place in the settlement of Carmel in the occupied West Bank.

Infiltration sirens were heard in Carmel before the attack. Settlers were instructed to remain in their homes and lock their doors and windows. There were no indications that the gunman actually managed to enter the settlement during the attack. He may have opened fire at it from outside.

The gunmen targeted a yeshiva, a traditional Jewish school, in Carmel and a car that was passing by just outside the settlement.

Israel’s emergency service, the Magen David Adom, said its medics treated an 18-year-old man who was moderately wounded by gunfire. He was taken to Beersheba’s Soroka hospital.

The Israel Defense Forces (IED) dispatched dozens of troops to the scene of the attack and launched a manhunt for the gunman and other possible suspects. During overnight raids across the West Bank, at least 17 wanted Palestinians were arrested.

Attacks against Israeli troops and settlers in the West Bank increased sharply in the last few weeks as an apparent result of Tel Aviv’s strict security measures against Palestinians.

I swear we will avenge him soon. For every brother of zion wounded, we will neutralise ten Palestinian terrorists. 🦾🇮🇱🦾

A filthy inbred Jewish invading scumbag unfortunately was only injured instead of killed, better luck next time.

To keep the terrobalance, they now has the right to do the same with 10 arap musiciens.

Who gives a damn