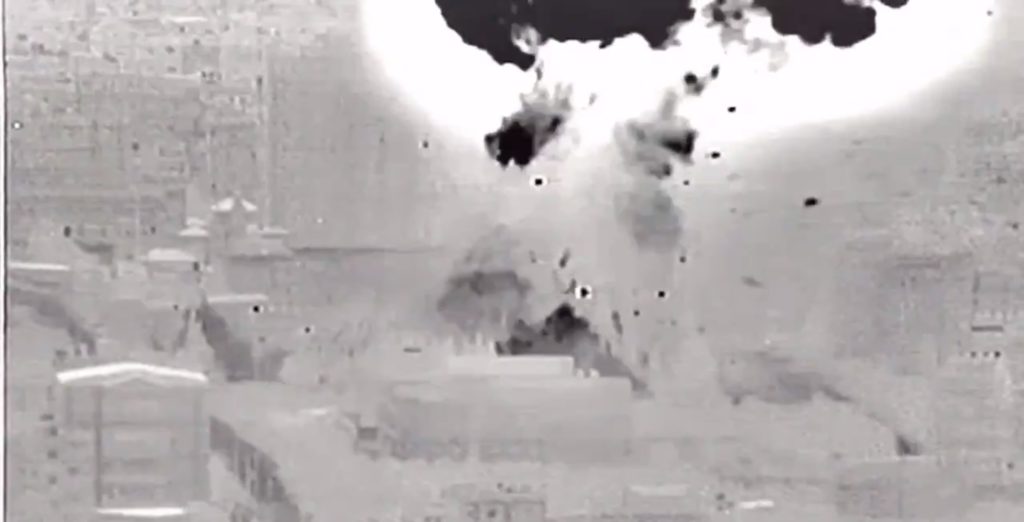 Early on July 14, Israeli warplanes carried out strikes on a number of targets across the Gaza Strip. According to the Israeli Defense Forces (IDF), the targets included an underground tunnel and a training facility belonging to Hamas.

The IDF claimed that the strikes were a response to “the terror acts instigated during the violent riots along the security fence yesterday, in addition to the continuous arson attacks damaging Israeli land on a daily basis”.

The Palestinain armed group Hamas responded to the IDF’s strikes launching 31 rockets and morter shells. The Iron Dome system intercepted less than ten of them. However, no damage or casualties were caused by the Hamas shelling.

Spitfire: So Jews want to play?. Press the Sampson OPTION by any means, Spitfire was Here.

“no damage or casualties were caused by the Hamas shelling.“

I was thinking the same which leads me to the question “How can The Lebanon have relatively advanced weapons, when Hamas basically has over-sized fireworks ?”.

common dude….you know better…..want a serious answer to that ….. question?

well quess …opps… there is a total blockade of gaza, by sea, by air,…… but you knew that…… so was your question sarcastic above?

ps. by total blockade i mean totally isolated from the outside world…nobody goes in, nobody comes out…..all services are done through israel, 100%…

Regards the blockade, it has not always been that.

hamas I have a feeling is collaborators with jews if we consider whose financing and supporting them. So what they do probably is giving the excuse to israel to attack lebanon. Maybe I am wrong but is a gut feeling I have.

Hamas is a Salafist terrorist organization funded by Qatar.

and if their were funded from pluto and saturn wtf what is your point??? are you a satanic evil jew?

as long they are killing jews and each other, is fine by me my friend.

Murder is a crime and a mortal sin.

then is good thing I am not religious, or believe the BS, most humans are following one way or another.

As for crime and mortal sins……… depends who you killing and why. Defective DNA is a duty to recycle it and as long defective DNA’s killing each other, they are saving the rest of us, from a lot of work.

So as far I am concerned, they can kill their own kind freely.

k I dont mean to be rude and usually I do respect other peoples believes, as long they dont trying to preach them on me. Humans write their own karma’s kid.

Some humans, deserve more than arranging for them a meeting with their creator and they can sort it out between them and who ever manufacture them. Some others, is unfortunate, they been at the right time on the wrong place and some others, worth hunting them down and give them a very slow and painful death.

For example the ones who selling out and destroy Greece. Now you maybe not up to the job, but we are and we have done more than your imagination can help you, to fight what is happening in our motherland and from the look of things, we will have to do even worst, as it can not be avoided as things go.

So make peace with your self and put both your priorities and naive believes at rest. And decide who you are and what you stand for, as you can never make an omelet and not break the eggs.

Now walk in peace and keep your believes for yourself.

Yeah but killing for defense is much different than killing for revenge. For example, we can gun down our traitor prime minister and his cabinet. And? He will be made a hero and there is a possibility a dictatorship will arise. On the other hand, if a moderate government rises up and confiscates his property and put him in jail then it will be far better.

israel must stop all this bombing .its a sad site to see there damage on non terrorist people.

Israeli group of terrorists once again attacked on children of Palestine that held with them as hostages. The criminals Trump and their allies use these child butchers Israel and ISIS as their global army.

Usual troll response implying Trump controls the jews, rather than the other way round.

Israeli and Saudi Arabia are siamese twins, and share the SAME influence in Washington. No coincidence here. Wahhabism is a form of JUDAISM, not islam. The jews, as we all know, are at the centre of the planet’s trade in organs taken from living victims. The ‘hospitals’ that use these organs are run by jewish surgeons, but are located in South Africa, and wahhabi nations in ther Middle-East. Interestingly the jew trade in Human organs started in facilities in Turkey. Jew horrors in Israel years ago made TV shows bemoaning the fact that jews had to travel to Turkey to get their illegal organ transplants, rather than being able to go to a nice facility in Israel itself.

The programs to do DNA sampling across the planet are designed to allow the jews to build up a database of suitable Human victims. When a powerful jew needs an organ transplant, a match is located, and a jew death squad is flown to the nation where the victim resides and ‘accidents’ the person. This obviously happens mostly in second and third world nations.

This world is far more demonic than most here realise. The jews of Israel and the jew leaders of all jew groups across the planet are very open in stating that jews are the ‘master race’ and above the Laws of Man. In the UK, for instance, every jew leader of every jew body has stated that criticising Israel must be made a CRIMINAL offense. The leader of Labour (Corbyn) has been relentlessly attacked by jews for not following this instruction.

Jews state, as seen with this latest demonic war crime by Israel, that jews can attach the word ‘terrorist’ to any group of ‘sub-Human’ non-jews, and then murder those ‘sub-Humans’ at will.

Putin works to ensure the palestinians have no viable means of self-defense. On the other hand, Putin partners the demonic jews of Israel, and assists them in their search for the most murderous technologies possible.

The jew nuke program has been actively assisted by Russia, the UK, France, Germany, Canada, Australia and the USA. Germany gifted THREE submarines to carry jew nuke warheads, warheads that target every significant muslim population centre on the Earth.

You’ll never see the usual trolls here deal in any fact that hurts the jewish cause.

World leaders claim that racism is ‘evil’- yet the same leaders, Putin included, engage in pure demonic racism when they elevate jews to the ‘master race’ position where law does not apply to jews.

Where’s the demand to bomb the jew sniper schools in Israel? Ah, but jew acts of utter demonic barbarity are ‘exceptional’ aren’t they. To claim a jew terrorist should ever be taken out is the height of ‘racism’ in the words of Putin.

The jew sniper proudly wears the ONE SHOT TWO KILLS shirt under his uniform. It reminds the jew butcher, as he takes a bead on a ‘sub-Human’ child, and cripples her for life, that as a jew he can rape and maim and murder, and then be an honoured guest in any nation in the world, or enter any university after his ‘military service’.

That jew sniper maims and butchers on behalf of EVERY jew in EVERY nation. And the simularity to Hitler’s nazism is perfect.

yes spot on…….it was i think about 15 years ago when a big swedish newspaper wrote a great article about the trade of human organs and that , surprise, the jews control it….the article went on how israel is killing palestinians by means in which their organs can still be used, and that israels prison system is used for the human(palestinian) organ trafficking. Israel is also(if you understand the spiritual side of things it should not be a surprise) the number 1 country of the world in need of human organs.Why is that? think spiritually and the answer is logical…. they are evil satanic beings……….your heart needs love……….. just check out the us former presidents or vp´s…….not one with not atleast 1 bypass…. no love….no heart

Khazars back to Khazaria, Salafis (Hamas) back to Wahhabistan. Levant belongs to Levantines.

For the Terror you doing to those poor people in Gaza you will always leave in fear from sirens always you will never find peace, your hands are socked bloody, the terrorist should be killed but civilians branded as terrorists for your own satisfaction the fear will be your best friend forever.

From this article: “…… in addition to the continuous arson attacks damaging Israeli land on a daily basis”.

There is no such thing. All of the land,which is OCCUPIED by Israeli Zionist PSYCHOPATHS, is Palestinian

It is high time that Hamas gets a bit more accurate with their rockets and really starts hitting Israeli targets, the country deserves it badly.