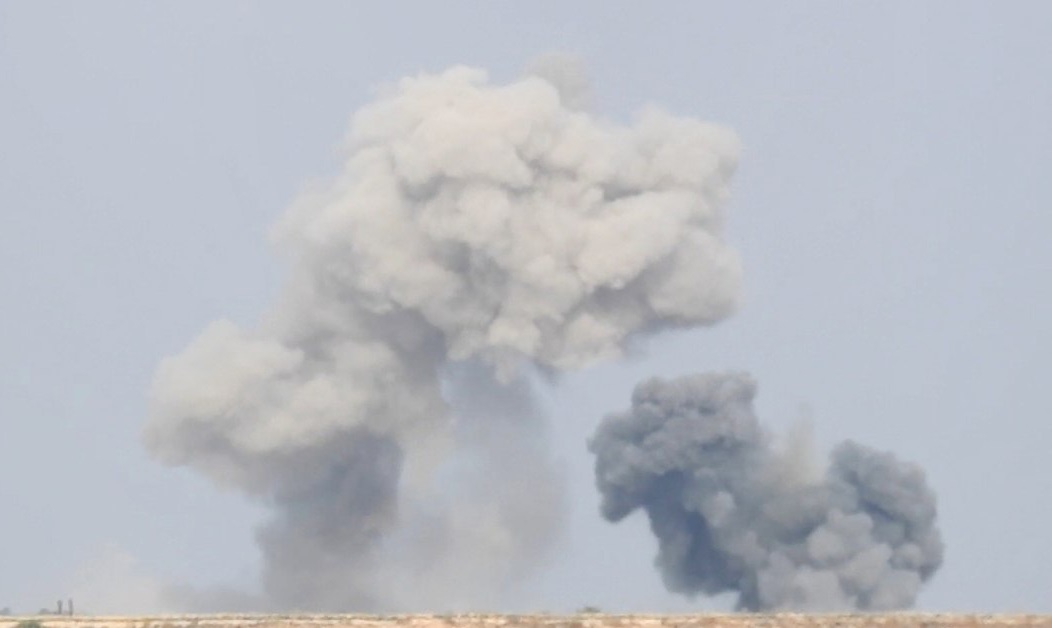 On July 25, two rockets were launched by an unknown side from southern Syria at the occupied Golan Heights, according to the Israeli military. Israeli media said that both rockets landed in an empty area and didn’t cause any loses.

Five hours after the incident, the Israeli military announced on twitter that warplanes of the Israeli Air Force (IAF) destroyed a rocket launcher in southern Syria. Furthermore, the Israeli artillery shelled the area from which the rockets were launched.

The Israeli military warned that it will “act against any attempt to compromise Israeli sovereignty and the safety of its civilians.”

Later, Russia Ministry of Defense (MoD) of revealed in an official statement that the Israeli airstrikes targeted a position of the ISIS-affiliated Khalid ibn al-Walid Army in the western Daraa countryside. According to the Russian MoD, the Israeli airstrike destroyed a rocket launcher and killed several fighters of the terrorist group.

“Russian armed forces’ command in Syria used the existing communication channels to thank the IDF leadership for killing terrorists and stopping a massive provocation,” the ministry said in its statement, according to the Russian new outlet Sputnik.

During the last six months, Syrian opposition activists reported that Israeli warplanes and unmanned aerial vehicles (UAV) conducted several airstrikes on the ISIS-affiliated group. However, these claims were never confirmed.

FOX News will be reporting on this for weeks as the most amazing military operation ever.

Netanyahu ordered the shlomos in ISIS to attack the Golan, so there could be jewish airstrikes against the Washington and Hell Aviv equipment given to ISIS. They don’t want more equipment falling into the hands of Assad.

All the Shlomos have to do is fire into the Golan tell everyone to run for cover and the jews will destroy all the arms given by the kosher nostra to ISIS.

Or Russia visit have convinced Israel to keep their hands off the Syrian security operations.

Destroying the evidence. Makes sense because they are retreating.

What is “Shlomo” by the way?

After Killing a Syrian pilot who was attacking ISIS…now Russia granted IDF!!..thats not the problem as Russia play two bands to avoid that Israel build gaspipelines to link with Arab gas line and to link to EU…the problem is the Pussy Syrian president and the military staff that dont retaliate along 7 years of airstrikes and artillery attacks.. and its look like a pathetic a Cowardly armed forces!…they should look in the mirror of the Palestinians and his fight!

Before starting a war with ISrael there is a lot of Syrian territory to recover in Idlib and easter Syria, for everything you do there is a proper order.

Of course, the people that have been fighting for the past 7 years and are getting closer and closer to winning this war are cowards because they don’t follow your (handicapped) military strategy.

One thing is to fight vs terrorist..where Russian air force,Shia army, Tiger forces and 104 brigade of Issam Zaheride have been the true winners…others SAA military could not defeat terrorist…but the question is that SAA can retaliate because have enough weapons to repel IDF respose!…its a matter of Honour man!..Not Strategic!

‘Pride comes before a fall’, it is wiser to control that human weakness in order to be successful.

Iran retaliate…50 rockets+5 missile vs israel…nothing happen..Israel launched a largets airstrike ( 28 jets+70 missile) and nothing happen…80% of its missile were intercepted..minimal damage…70% less than each ISIS&Nusra offensive!…SAA remain missing and become in a pathetic sparring!

You really need to be more patient of winning in Syria is your goal Manuel.

1 good thing that Israhell did in the last 50 years LOL.

It’s just a distraction, nothing good about this.

Every jew and zionist advisor to Obama recommended arming ISIS:

this is the time for IAF strikes, hit and burn fcking Iranian soldiers, Druze mercenaries and FSA traitors, they are fcking pigs prepared for slaughter, I hope that ISIS will make a big massacre Druze and FSA stinking traitors

Another one disguising himself behind european name?

Hello mate. Found you at last. I need to postpone tonight / tomorrow for sure as I am flying to the UK office for a meeting tomorrow, not sure what time I shall be back. Apologies.

That is allright my Brother…just let me know when you have the time…:)

Who is the best Jewish cook in the world? Adolf Hitler. hahaha love it

This was a desperate cry for help from Isis to their mother state to help them repeal the Syrian Army. Isis was trying to provoke mama to attack Syrian coalition.

That’s what you call Friendly fire :}

Ha ha, friendly fire can happen to anyone.

Friendly fire, in other words.

Hahaha you beat me to it. Exactly what I was thinking.

It happens when you get too big for your britches and don’t follow orders.

ISIS was trying to use the trick of HTS. Be close to the SAA line and launch a few rounds into Golan. Sort of like an airstrike request against SAA.

That would be my guess also. But why did not the Israelis oblige? After all the rockets landed in ’empty space ‘ as probably intended. So why did nor the Israelis go along with the trick?

They landed in the Golan Heights, which then gives the hooked noses to play psychology and state “The Israeli military warned that it will “act against any attempt to compromise Israeli sovereignty and the safety of its civilians.”” …. ie inferring that the Golan heights is Israeli sovereignty.

it could also have been an error and the Russians thanked as an ironical measure..

Yes, I thought the same John and that being the case the Israeli officer responsible for the ‘blue on blue attack ‘ will be re-assigned to Bagel Deliveries now :)

it’s a woman, a captain, and it’s the same responsible for downing a “syrian drone” weeks ago.

That would be a promotion. ;)

And the Syrian cowards will keep on taking a beating, it is amazing that even a child knows that a bully will only escalate aggression if not hit back. It is time the SAA show some dignity and target Zionist military bases on the Occupied Golan.

Yeah look at the beating they took in aleppo, deir ezzor, gouta, Palmyra and now daraa. With all these beatings I dont see why Israelis and Saudis never looked so livid

Keep your mouth shut. Our side is winning this war. They just have to keep winning.

They must be done evacuating their buddies, so now lets put on a show for the press. In any case, a day late and a dollar short.

I really doubt about this news. Is Israel ready to sacrifice its creation ? I do not think so.

Are they ready to betray even their Frankenstein for good PR? (yes, of course!)

Are you kidding yourself? These people have a “use by” date for Israel. They don’t give a f* about anyone but themselves.

They probably notified them that they wanted to surrender to the SAA, and that’s what they got for an answer.

Major blunder, heads are going to roll, doubt that the jews will post on the internet who was responsible like they did on downing the Syrian SU22 and killing the pilot. A major FU.

lol this is going to short circuit the anti-israel tools here!

have you been watching those Jack Bauer series again?

Didn’t your psychiatrist warn you that they don’t you any good?

Hmm..Have the zionists got their intelligence mixed up? Targeting their own proxies. Or, are they trying to cover up, what has become quite obvious?

Well that one way of destroying the jewish fingerprint from the scene of the crime.

This is just a public relations exercise,to try to undo the damage worldwide of israhellI collusion with Isis terrorists. But it’s too late for that BS.Israhe’ll is a racist,warmongering, genocidal, terrorist regime,and needs to be changed,either from inside or outside, either way it’s finished.

Well I never. Israel finally slaps isis on the wrist. Or were they just trying to deny the Syrians some military hardware worth having?

Looks like they found that David Sling Missile they lost

Israel didi this to hide their crime against Syrian Airforce 2 days ago. trying to play innocent . But Zionist will never change . Golan belong to Syria and it will be taken by force soon. doesn’t matter Israel go and cry to US/Rusia to remove all iran force that will never happen bcuz even US accepted bcuz of iran and Iraqi ressitance and Hezbollah support Syrian and its people have survived the onslaught of Zionist and their whabhi slave