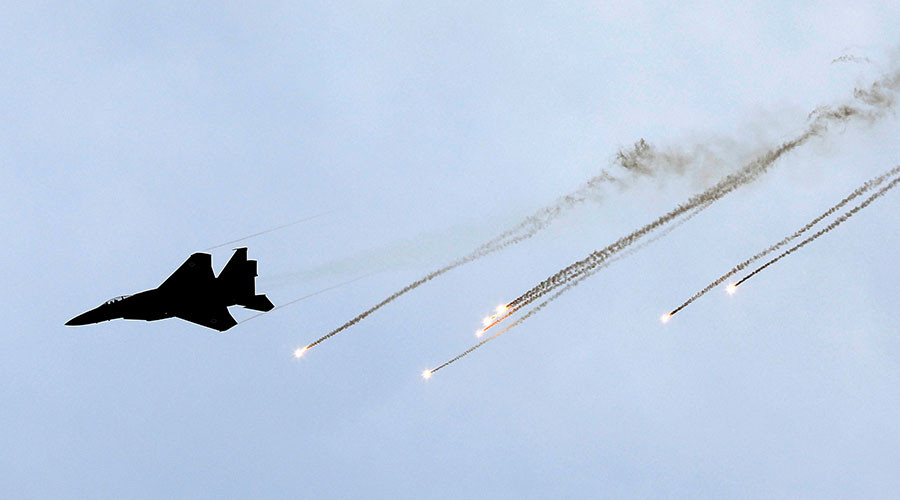 Israeli jets allegedly carried out four rounds of airstrikes. There were no reports about casualties or damage suffered by Syrian government forces.

Initially reports about the incident appeared in pro-militant social media accounts and then were widely spread by the Israeli media.

If confirmed, the recent raids were the fourth round of airstrikes attributed to Israel in Syria in less than a week.

The Syrian Defense Ministry and the Israeli Defense Forces have not commented on the issue.

“Israeli Prime Minister Benjamin Netanyahu said that he has told Russian President Vladimir Putin that Israeli forces will continue airstrikes in Syria if they deem it necessary.

“If there is feasibility from an intelligence and military standpoint – we attack and so it will continue,” Netanyahu said during a visit to China, adding that he had informed Putin of Israel’s intentions.

According to the Jerusalem Post, the Israeli PM also dismissed reports that Russia was insisting that Israel cease its military operations on Syrian territory,” the Russian state-run RT television network reported.

It’s always odd to see that Israel never protested FSA movements, or Al-Qaeda in Syria. But even mention SAA forces, and the airplanes go out on a bombing raid.

The reason for that is because so Neither Al Qaeda nor the FSA pose a threat to Israel’s interests, however the Syrian government, via supplying Hezbollah in Lebanon with convoys of advanced Iranian weaponry, threatens Israel’s security interests, as a result Israel strikes those weaponry convoys in hope of minimising the amount of advanced weaponry Hezbollah gets, to further Israel’s own position in the next war with Hezbollah.

So, in order to promote the Greater Israel zionist project, they are willing to let a virulent group grow unchecked instead of dealing with a coherent state with diplomacy. Got it.

I think Israel is about two years too late to minimize the potential threat of the weaponry that Hezbollah has been stashing away. Israel really doesn’t have to worry hiding behind the skirt of the U.S., i.e., they won’ t ‘lose’, but the next fight with Hez will cost them dearly. Maybe we’ll finally see the fall of the Israeli government.

@pavewayiv:disqus You answered your own argument, Israel is really unwilling to pay the price of a new war with Hezbollah, regardless if it would come on top, the road to victory would be hard.

As a practical matter, ‘Israel’ is the psychopathic Likudniks and their deranged and aging leader: Nettanyahu. Bibi want’s his legacy of a ‘big’ war with Hezbollah and his decaying carcass’ shelf-life is a threat to that. It’s now or never. Nettanyahu isn’t getting any younger.

The sensibilities of the average Israeli are to avoid war, but they have no say in the matter – it’s no like Israel is a democracy. They will complain loudly, but pay whatever price the Likudniks are willing to pay. That’s the trouble with nationalistic propaganda substituting for critical thinking for so many years. It’s treasonous for an Israeli to refuse to march into the meat grinder on the whim of their government. Except this time, the meat grinder is coming to them.

They will have it anyway. The more they try to prevent it the more it becomes imminent. That’s how it works. And when that happens Israhell will cease to exist as a state. That’s a simple law of physics which it seems they are not able to understand in their blind hatred.

Act of war against sovereign country. Reaction needed otherwise after a while they will also bomb Europe if they wish.

There will be a strong Islamic state in Europe if things go on the current trajectory. Given this, it is not out of the question for a “threat to Israel” to come from the European continent at some point and that would give Israel a reason to attack them as well.

It would take a couple of decades for the Muzzies to take over, and hopefully they never will.

They will definately take over Europe, and it will be the Europeans hand them the keys in a golden plate.

No . Such articles should be posted when it is confirmed . For now it isnt

I really hope not because why the hell didn’t they shoot them down again??

Israel just attack when ever their want to test their air force.Look like no air defence of Russia can detect them.

It is not a question of detection. It is a question that Israeli jets are launching outside of Syrian territory since Damascus is very close to the Eastern border of Lebanon and Israel. Attacking the jets directly risks attacking aircraft that are NOT involved in the attack and giving the Israelis the justification for a wider bombing campaign.

The Israeli attack at Palmyra was different. It is far East enough that the Israelis crossed into Syria to launch and were fired on by the Syrians.

Thanks for geographical information i appreciate it.

so what? syria should down as many of their fighters and drones as they can, thin out their air force lol

Then their must activate the systems before one desperate enemy deliberately take them out.But thanks for information.

Israel is coordinating attacks with ISIS keep the air defences on extremely high alert and stop relocating ISIS just eliminate them.ISIS is having tactics if their get cornered their just surrender and go to Idlib and just starting attacking again.

Israel regime is not the chosen one it will bring disaster to real Israeli chosen ones.

i hope syria keeps downing their planes everytime they bomb, thin out their air force lol

I do not think the Syrians can shoot down Israeli planes. And in practice they are not really trying. Israel’s rationale is that they strike Hezbollah convoys not Syrian soldiers. All statements about the downing of airplanes are only propoganda. If an Israeli plane is shot down or worse, an Israeli pilot will be killed. This could be the end of Assad. Israel began wars for less than that.

I don’t think so pal. Besides, i have no reason to believe what you say about propaganda. If Israel tries a big operation on Syria, Russia will have no choice to get involved and they know that’s a war they can’t win

Now that The Israeli Secret Intelligence Services (ISIS) is losing, the terrorist motherland itself (Israel) is directly intervening in Syria to reinforce the terrorists.

If true, and it had to be confirmed, then it is a message to Russia that Israel will not stop helping militants in Syria so long as hezbolla and Iranian backed militia are in Syria. Which means they support endless Syrian war because without hezbolla assad would lose.

That it happened as bibi is on China means he got Chinese backing to rebuke putin. He paid them a bribe, giving away more US technology most likely.

So basically the S-400 is an useless piece of garbage since Putin would rather continue to suck Israel’s cock than help out his ally.

Iran is the last truly sovereign country left in the world.

US President Donald Trump and Russian President Putin several times told to Israeli terrorists state prime minister that please don’t come again but he does not understand. It will be better to kick him out from USA and Russia with humiliation.

Prime Minister Netanyahu is under very serious investigation for corruption right now. Hmmmmmmm, what is wagging what here?

Something in this story is not adding up. The SAA is beat up in terms of air defense but, they have equipment that can knock out Israeli jets. However, they really don´t seem all that worked up about this. So, my feeling is, an entirely different game is going on under cover. There are probably multiple facets to it.

Hez and company, already have missile factories, if what was reported is true, so why wouldn´t they have a lot more stuff as equally or more lethal than that in stock? They almost sank an Iraeli ship last time. Ya think there won´t be more surprizes the next time around? One hundred airstikes would not make a difference. Isn´t anybody watching what´s going on with IS? You need ground troops to dig people out over there anymore. Especially if they are in the type of terrain they have in Lebanon.

I think it is another one of these things that needs to be patiently observed, over a longer period of time, to glean the truth when it comes out. A good day to all.

Notice the article says that four air strikes happened but nothing was hit. This seems more like chest thumbing to me.

The whole thing is very strange.

seriously like if this is true why didnt syria shoot them down again like they did last week?